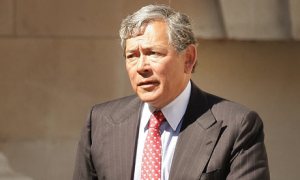 “I don’t think there’s any timetable, what I do is I measure when I think is the appropriate time and frankly I’ve given it no thought. We still have an awful lot to do, and I’d like to meet those challenges, I think it’s enormously exciting and I love my job,” said Lloyds CEO Eric Daniels to Sky’s Mark Kleinmann this morning.

When Daniels put a brave face on being handed the HBOS mess by Alistair Darling eighteen months ago, I remember feeling no sympathy for him at all. This was primarily because of his smug, ridiculous lie of the previous week – that the banking bust had been caused “by the US Federal Treasury printing too much money”….a conclusion almost as mendaciously daft as Hank Paul’s insistence that bad loans had been forced on the banks by Clintonian “borrower pc”.

But today, on announcing a £1.5billion profit for Lloyds HBOS, Daniels was making a sound (and widely recognised) point that the Slog has been bashing on about for months: he’s not lending to business or homebuyers because there’s very little demand for credit out there.

Larger businesses are cash-hoarding anyway, and over three quarters of SMEs don’t use eternal loans beyond an agreed overdraft. The consumer desire to save rather than consume is already well-documented – and despite conflicting property market reports, most people have a gloomy view of where house prices are headed.

I’m sure Daniels is glad of this (true) cover story, because it distracts attention away not only from the cost of total bailout, but also from the problem faced by most of our UK banks: they have the best part of £800billion to repay by the middle of 2012 – and £1.5 billion isn’t taking them far down that road. That this has been missed by most ordinary Brits, almost all politicians, and a shamefully high percentage of journalists is merely a comment on our culture: the debt is huge and real, and only dwarfed by the even bigger banking problems currently being unconvincingly denied in the eurozone. And the debt is mainly owed to you and me.

So when Our Eric gushed to Kleinmann….

“What I’m very pleased with is that the current stock price is well above the 63 pence break even price, and so now UKFI [which manages the taxpayer’s stake] has optionality, they have a very nice decision to make over when do they wish to sell because whatever they do sell will be in the profits, so the taxpayer will have done very well.”

…he was of course talking complete and utter patronising bollocks: we are still saddled with huge risk in relation to mega-debt. The taxpayer is effectively the oversexed teenager who just rescued Lindsay Lohan from drowning, and got rewarded with an ice cream. The gift, you might say, is not entirely in keeping with the favour.

But none of this really explains why rumours persist in suggesting that Daniels has other plans career-wise….or other people have plans to replace him…or both.

Once again this morning, passing mention was made by the Wall St Journal of ‘a man who has probably reached the stage where he should move on’, but without explaining why as such. It seemed to me a somewhat gratuitous and cavalier observation – but it’s not the first time we’ve seen it.

Only three days ago, Live Trading News ran a piece overtly stating that Daniels had narrowly missed being given the boot in the Spring, and late last May, sporadic stories appeared in several quarters saying that the American would be gently eased out over the next year or so – indeed, that a shortlist had been drawn up for his successor. Many shareholders and investors held Daniels at least partly responsible for the huge losses that the HBOS deal produced (in fact, it wasn’t his idea at all), but the desire for blood seemed to have died down in recent months – especially once this surprisingly swift upturn in the bank’s fortunes began to be mooted.

I don’t like the cut of Daniels’ jib (‘smarmy’ comes to mind rather too easily) but there’s no doubt he is smart, and ice-cool under pressure. Pressed by various hanging meetings and Parliamentary committees, he has remained tight-lipped about precisely how clearly he understood the utterly borassic nature of HBOS – and what inducement he and others were given to save Darling’s face.

Yet the rumours of a move persist. Last month, a Slog source told me that “Daniels is the one looking for the exit”, but you’d have to wonder why: surely he is now a hero – particularly when you consider that his hints of a big profit improvement were widely poo-poohed earlier this year?

As early as May 2009, the Guardian reported that Eric Daniels had been handed £3.8million in shares in order to induce him to stay – a report which, if true, supports the idea that he’s not short of offers, and this is why the Board is trying to ensure it has a successor in place.

I’m told that a key Daniels’ frustration was in dealing with politicians who put their own image ahead of any other consideration; and that in the face of this, the shares were a bribe, pure and simple. I’m also told that – despite his apparently magnanimous decision to forgo two bonuses – Eric Daniels had a secret clause included in his contract to ensure that he would be given the full amount later: it will be triggered by a pre-agreed rise in the share price. So the chances are that by next week, Mr Daniels will have tucked the full amount away.

There may also be another element – something analysts and the commentariat often fail to take into account. This is to do with the fact that Daniels is not best-liked by his colleagues. He is reputed to be (as one former staffer puts it) “smooth as silk, but a cold-hearted bastard”. Details are lacking, but the Slog understands that distaste for the bloke extends to Lloyds Chairman Sir Win Bischoff.

However, Bischoff’s moment has passed: Daniels clearly has the upper hand now, and the word is that he may well be at the helm for another two years.

PS As I write this, Robert Peston is delivering a BBCNews report on the Lloyds results. It is a presentation of such mind-blowing superficiality and condescension, I’m left wondering just how bad the Mark Thompson regime might get before China Syndrome rules apply.