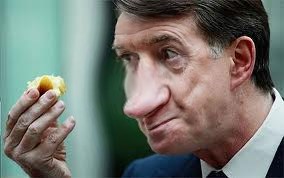 Bit of an old fruit

It can get very tiresome indeed having to deal with mad bankers, blind trade unions, incoherent politicians, unreal eurocrats, crap telly and global economic wake-up calls/meltdowns/implosions/warming. So here is a selection of other news to revitalise you as the afternoon palls. Think of it as the blogging equivalent of a Mars Bar.

At Davos this morning, Lord Manglesum of Coy told his audience that he did not need lessons in ethics from bankers. Bankers immediately responded by saying that they would pay dearly for his Lordship’s advice on how to stay out of jail.

UK Cities Minister Greg Clarke is to address our politician problem by fast-tracking the creation of eleven more of them. He told the media yesterday that economic growth could be boosted by asking voters in a referendum if they wanted more elected mayors for major cities. Later today, Theresa May will explain why teaching rapists how to cook is likely to reduce the divorce rate.

The Ministry of Defence told MPs yesterday that it has somehow mislaid £5.2bn of military equipment. The lost items include helicopter rotor blades, night-vision goggles and an inflatable boat. However, as luck would have it the civil servants were able to announce that they had found £1.3 trillion worth of pension emoluments to which they were not legally entitled.

Former editor of the New Statesman John Kampfner told the Leveson Enquiry that “a leading Blairite spin doctor” had been in the habit of dictating stories to Lobby Correspondents during the 1990s. Asked about the allegation, former leading Blairite sin concoctor Alistair Campbell insisted that he could not envisage any such thing having happened ever, but that he had made the entire David Mellor shagging in a Chelsea strip story up in the interests of journalistic accuracy.

Nottingham couple Catherine and Gareth Bull told the media that they “went into shock” after hearing that they had won over £40m in the euromillions lottery. They said they would spend some of it on a box at Manchester United, and spend what was left on two large cod and chips at the El Paso Supper Bar in Prestwich.

Homosexual Human Rights campaigner Peter Tatchell is 60 today. He has been campaigning for the right of every male human to be outed as a homosexual, he told The Times, “for 45 years”, and claims that he has been single-handedly responsible for doubling the number of homosexual men who would rather not say. For this, we all owe him a vote of thanks.