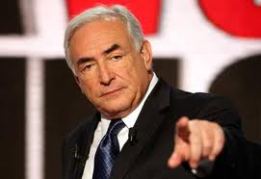 Dominic Strauss-Kahn, the one time boss of the IMF, told the Guardian yesterday that forces close to Sarkozy and the UMP party maximised the damning nature of the scandal involving Nafissatou Diallo.

From the very start of the saga, The Slog led the field in believing that DSK was the largely innocent victim of a sting.

Strauss-Kahn said yesterday that although his encounter with the Sofitel maid probably wasn’t a set-up, he believes his arrest on May 14 2011 was “shaped by those with a political agenda…more was involved here than mere coincidence”.

DSK now alleges that French intelligence had been eavesdropping on him weeks before he was arrested on suspicion of sexually assaulting Miss Diallo. On November 28th last year, The Slog alone put forward the evidence that the episode was in fact a French intelligence caper to get rid of DSK’s mobile phone, as very clear evidence of hacking was contained on it. (Hence the phone’s permanent disappearance).

And when he returned to France, The Slog alone averred that Strauss-Kahn’s entourage would be painstakingly putting together a case to demonstrate Sarkozy/Intelligence forces complicity in the orchestration.

Revenge is a dish best served cold. DSK has served this one up with impeccable timing.