It is very interesting (and highly disturbing) to watch the rate at which the former Red China is developing the same blues as the West from whom it “learned” how to become a globalist bourse player. Two things are becoming all too clear as the Shanghai index slips a lot, rallies a little, gets controlled some more by the Politburo, and then falls some more:

1. You can’t be a serious poker player unless you’re in debt bigtime to the House; and

2. quite soon the genuine physical export growth runs out of steam, at which point you need a property bubble on the back of Western QE, and then when it bursts, one has to fall back on virtual trading in woolly financial services to keep up appearances. This chart of financial services’ share of Chinese gdp since last year makes the point neatly: 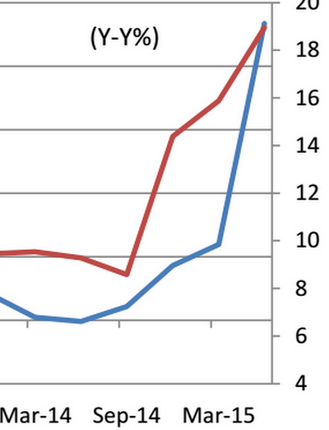 The blue line represents the huge spike in share trading, and the red line shows the gdp share of financial services.

The collapse of China’s Shanghai Index has been accelerated by the immediate need for investors to sell stocks in order to pay off the loans they incurred to buy them in the first place.

Then there is the “national debt” on all levels. The U.S. total debt to GDP, which includes household and corporate debt, is nearly 335%: a horrendous number, but China is catching the Americans up with a debt to gdp percentage, using the same criteria, at around 285%.

The Page 1 reason for all this nonsense is obvious: with an austere, maxed-out West no longer able to soak up Chinese exports, Beijing’s growth is regressing quarter by quarter. As always with global neoliberalism, the only ways to maintain belief in the impossible dream of infinite growth are first, to be hocked up to the eyeballs; and second, to start ascribing value to worthless bits of paper derived from surreal leverage ratios.

Just as it was completely unprepared for the African refugee crisis, so too the EU is going to be gobsmacked when Chinese bigwigs stop buying all the Volvos, Mercedes, Purdeys and Ports that have been made available thanks to Franco-German opportunism and the demands of the Troikanauts.