If anyone now doubts what the European Union is turning into, let them read this post. Macron is putting down street dissent ruthlessly, letting his goons bully distinguished journalists, and hiking taxes on the poor at every opportunity.

Last Friday, Emmanuel Macron’s developing corporate State was revealed as accelerating its pace of variously knocking seven bells out of the Gilets Jaunes and spray-bombing students, by getting full-on aggressive with journalists.

The striking thing is that there are two sources for the story: one is Agence Free Press (a sort of French Reuters generally agreed to be pro-government) and the other is Le Monde – for my money a centrist title with more balls and journalistic principles than the slavishly pro-Elysée Figaro.

Le Monde journalist Ariane Chemin was early last week questioned by French security services for nearly an hour, having refused to reveal her sources for a piece noting that corruption within President Macron’s inner circle suggests that his nickname ‘Macrony’ is well deserved. She has been a target of the state after her series of shock posts resulted in a flood of resignations by government officials. Le Monde’s managing director Louis Dreyfus is a pillar of the traditional French establishment. This didn’t stop him facing the General Directorate for Internal Security’s (DGSI) arc-lamp on Wednesday.

“Everything is done to make it intimidating,” Dreyfus wrote in an editorial describing his own DGSI interrogation, “I explained that I never read the articles before they were published, and that I was not meant to do so. And yet they repeatedly insisted that the offence was punishable by five years in prison and a fine of €75,000.”

The DGSI is a large dimension of the French Alt State. There are now some eight senior journalists (not nutjob conspiracoids) who have published negative stories on the government and been threatened. The line is always similar, and the tactics used Gestapoesque: threatening the “miscreants” with five-year prison sentences under various Defence of the Realm Acts.

“The authorities are using these summonses in an attempt to intimidate journalists and their news organizations and to identify their sources so as to punish them or deter them,” said Reporters without Borders secretary-general Christophe Deloire, “Investigative journalism is under attack in France. We call on the government to explain the domestic intelligence agency’s attempts to intimidate the media.”

In response to the investigations, hacks’ trade union SNJ-CGT plans a demonstration outside the DGSI headquarters “in support of those journalists summoned by the French state in violation of the law on press freedom.”

But Justice Minister Nicole Belloubet told the Senate this lettre de cachet style of Bourbon bullying “does not represent intimidation or threat”.

Belloubet, however, seems not to dispute Ariane Chemin’s account of her treatment. Perhaps in his rarified area of the Multiverse, threats of fines and imprisonment can be made without intimidation. Maybe on the planet he inhabits, such things are viewed as harmless pranks and banter. Oh how we laughed.

No doubt many regard The Slog’s French Letter as the silly double-entendre of an ageing adman going slightly batty in retirement. If they do so, then – being strictly factual – they’re correct. But the reality of eurozone life I try to present in these columns is presented purely as a means of trying to educate what anglophile Greek economist Costas Lapavitsas refers to as “the incredible level of ignorance about the real European Union that exists in British society”.

What gets to me more than most elements of that ignorance is the British Left’s deranged propaganda about “Nazis” in the UK, when there are genuine ones alive (and kicking) in the Brussels, German, French and NATO élites.

We live in a State where the mainstream media employ variously dense, biased and lickspittle journos who bow to every fascist demand of the government of the day. The thing we used to call investigative journalism no longer exists in the old media of the United Kingdom. Included in this scrotally neutered mix is the BBC itself, whose pc denial of reality is up there with the New York Times and The Guardian.

But the likes of Owen Jones, Tom Watson, and John McDonnell see Nazis everywhere but where they are; and firmly insist that the EU beyond Nasty Britain is a Nazi-free zone. Each of them has different degrees of delusion involving individual personality defects: the limp imp Jones is simply a clueless syntaxian Soviet anti-fascist in search of SS Officers he can hit with a flower; Watson gallivants about demanding that all media pretend Tommy Robinson isn’t there because Our Tom was born a control freak, and can’t behave in any other manner; and McDonnell is a Stalinist desperate to convince every Useful Menshevik Idiot that Nigel Farage is the advance guard of the future British Stürm Abteilung.

It is a sad truth that Owen Jones can’t see the SS influence in Macronisation and CRS police violence, Tom Watson can’t accept that Robinson calls out a pernicious dimension of Islam that the MSM refuses to recognise, and John McDonnell has got it in for the only politician voluble on the BBC about blatant bias in the BBC. Respectively, they suffer from tunnel vision, hypocrisy and cynicism. And all of them are ideologues who long ago lost sight of all things empirical.

That said, 90% of our political class are counterfeit nine-bob notes: the Conservative Party and its natural allies in Whitehall, the City, Washington and NATO are every bit as bad. It’s the Alt State allies we need to worry about, not pompous so-called legislators.

Globalist big business is but one of those allies. Only France could privatise a social weal supplier and award it a monopoly more unaccountable than the finances of the European Commission. Such is the case with EDF, a mob of gunslingers long criticised by National Assembly deputies, but unlikely ever to be jailed by the Marshal.

Last year, winter – four months in the Maison d’Amis here – cost me €2,300 in electricity charges. It’s a 1-bed apartment…the sort of thing a lower-class young couple with (say) one kid would like. Could they afford a bill like that? Listen – if I can’t, they can’t. 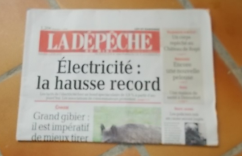 But nihil desperandum French citizens, because despite the already blatant profiteering of this globalist monopoly, the loons surrounding Macron have just announced (left) ‘A record price-hike’…..a whopping 6%. So if you were wondering what the Gilets Jaunes movement is about, well, it’s about this kind of brass neck milking of les vaches citoyennes.

Unfortunately, the GJs are fading somewhat. I don’t find this surprising. Their approach to the Western cultural problem of selfish greed by the Few has had an electrifying effect on the victims among the Many….and their strategy – “starve the Beast” – is spot on. But the GJ knee-jerk resort to demos on the street feels very dated; the creation of an apolitical socially mutualist organisation was a great idea. But they’re not that new-media savvy.

I’ve spoken to local GJ leaders here on several occasions, but the benignly anarchic nature of Gilets Jaunes can be frustrating for those who support them. At times, finding out what they propose to do next is like lassoing ether.

Meanwhile, natural science carries on its good works in the face of bad science and badhats. 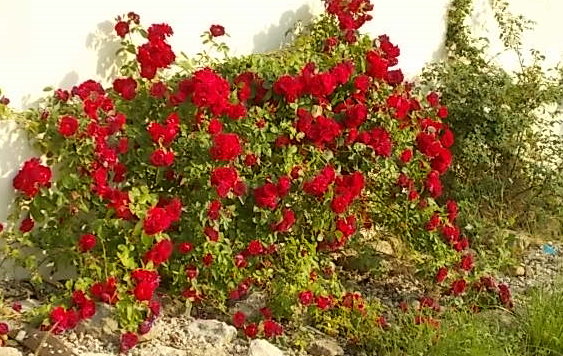 Beyond the real and the natural, IABATO! (It’s all bollocks and that’s Official)