It’s hard to see much in the way of disguised blessings in the aftermath of last night’s by-election result. About the ony one I can come up with is, “Thank God some reality has intervened right at the start”. Nigel Farage and the Brexit Party already have a mountain to climb. If you want to climb Everest, Sherpas, oxygen tanks and insulated clothing are essential.

There will forever be bricks and bouquets in this job. In a cultural environment where anger is present most of the time, far too many voters have extreme feelings. Further, both major Parties are mentally damaged by ideology. This is how minds get closed along with ranks. I stay unaligned because it’s what an honest commentator is supposed to be. For that reason, getting stick goes with the territory.

Since Nigel Farage returned to the Brexit fray two months ago, The Slog has made the following observations more than once:

TBP’s post result spin about Peterborough only being “no 201 on the likely seat-gain for us” was risible: which clown gave it that designation? It was a 61% pro-Brexit seat, held by Labour by a few hundred votes last time, rerun thanks to that MP being dismissed in disgrace…and TBP had a popular local businessman candidate with strong Tory Brexiteer credentials, with the Conservative Party itself in utter disarray. Where are these 200 more likely Brexit-gain constituencies? No, we must face the truth: this was a disastrous result for Farage, and a boost for the fascists running Europe from Brussels.

There is something strategically muddled about a bloke who approves a Party slogan saying “This is about more than Brexit”, having decided to call that movement The Brexit Party. It was also a ludicrous hostage to fortune to predict he would “win power at the next General Election” without allies and other reforming policies.

Because culturally and constitutionally, be in no doubt: what Britain needs – and what the biggest single voting franchise wants – is reform….not just independence from Brussels. The thing that could’ve given a Farage Party anti-divisive, broadscale support and hope for a new beginning was a brand identity putting light-blue water between the crypto-Communism of Corbyn Labour and the rank-bad unfairness of a profoundly cynical neoliberal Tory Establishment.

Well, that opportunity has been blown by a sadly blind attitude of aggressive, dismissive and narrow leadership. Two extracts from Slogposts last April serve to make the point: 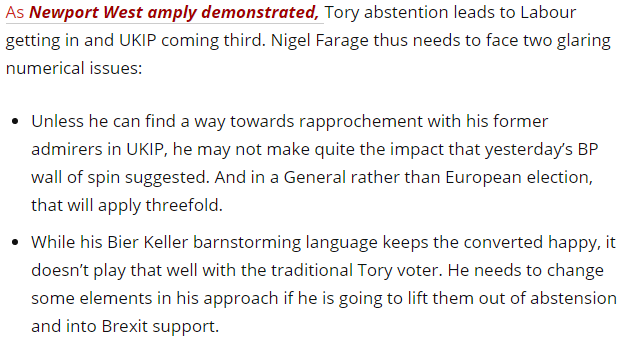 Nigel Farage must now hope that the Tories cock up by electing a Brino/Remainer leader. It really didn’t have to be this way.

Lessons need to be learned, and quickly.