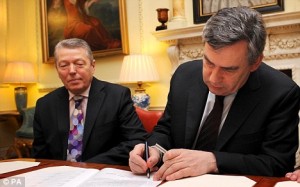 Labour bigwigs’ spin says it all
Alan Johnson stoked up the LabLib plot speculation this morning by telling the Times that “on voting reform and the dangers of Tory plans to cut £6 billion of government spending this year” the two Parties agreed. Not really: the preferred LibDem option is still STV (just) and the preferred Labour option is AV (as the only way of stuffing the Tories). But as The Slog has been banging on about since Wednesday, the LibDem Manifesto words have been ethically cleansed in order to fudge the issue once the serious horse-trading starts after the Election. Johnson talking about ‘agreement’ is just one more way of making the eventual deal seem honest.

None of the evidence seems to have alerted the Mail as yet, which

I wasted quite a few Euros on calls today, to confirm what my gut was already telling me: that the Mail is miles out on this. Mandy is far too cute to over-talk up an opponent in the hope that this would ‘distract attention’ from Brown – but ever-ready to stuff the Conservatives. He’s talking up Clegg a little to help make any post-Election deal look more credible.

And (of course) he and his dark-arts creature Douglas Alexander have been larging the ‘it’s wide-open now’ line as a way of rattling the Tories….and they’re succeeding. If that’s a plan backfiring, then I’m a banana.

The New Labour spin is all pointing to the same conclusion: they want to isolate the Tories, show a ‘good guys’ alliance taking shape – and then do a deal on AV as the new voting system. Thus Clegg is seen to keep his word, and Labour does better under AV than it would under first past the post.

The Independent’s Andrew Grice was closer to the money when he noted today that ‘Labour wants the Liberal Democrats to do well. But not too well. If the third party does respectably, it will stop the Tories capturing their seats in the South-west and South’. Correct….and cheer Paddy Ashdown up, who was saying in private recently that the Tories were canvassing well in the South West.

But with Grice too, Alexander was pushing the ‘it’s wide open’ line: “The kaleidoscope has been shaken” he told the Indie’s man. However, neither he nor Mandelson are ‘talking up’ Clegg beyond a certain point. Alexander anonymously gave the Guardian a judgement that “We will present him as a commentator, an attractive accessory, but not much more”. But then he too unveiled the isolate-the-Tories plan by adding that his team saw ‘exciting possibilities in trying to generate an anti-Tory tactical mood across the country’.

Game and fourth set to The Slog, I think. This is so obviously the Hung Parliament game-plan between Clegg and Labour now, the Tories need to wake up. It’s time both they and the media put the LibDem leader under the interrogation lamp on real proportional representation: is he for it, or not?