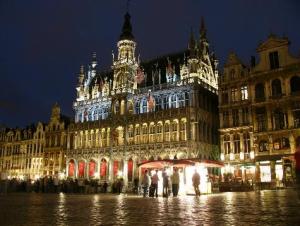 There were fun and games on the Skype between Berlin, Paris, London and Brussels over the last 72 hours. This latest episode in Eurocollapse is an amalgum of tidbits from TenMole, gossip via a Euro credit manager, and hard information from an anonymous Eurocrat double-agent. And it concerns the now more widely disseminated news of how one Brusselcrat’s response to the Greek bankruptcy seems to have set feral cats among infested pigeons.

It’s so silly in parts, I’d be disinclined to believe much of it – were it not for the corroboration, circumstantially related evidence and – as of yesterday – glimmers of it appearing in other columns. I must also once more credit Open Europe for its continuing (and continuous) level-headed coverage of the EU in full fascist disarray. Without OE’s help, none of this surreal jigsaw would make sense.

It seems the people with globular tummies in Brussels are in something of a panic about news (broken here and elsewhere) of the German banking community deciding the Euro is a bit of a joke if nobody’s going to obey the rules. They always had an inkling it would probably turn out to be a Toytown currency, but now they know. Beware Germans who know.

So the chubbies who like lots of chips and mayonnaise decided they had the answer: vet every Eurozone member’s national budget before they’re actually announced. Or put another way, why not let us the unelected control freaks who’ve never had a proper job come and tell you, the elected representatives of your rather unimportant country, how to ignore the People, and do what we tell you to do?

The first I heard of this was from A Downing Street Source. Gordon Brown is (as most of us know) not terribly keen on the European Project. He turned up late to sign the Lisbon Treaty, and had himself photographed with one arm up his back while the procedure was being forced upon his unwilling form. Gordon always takes out insurance in case things go wrong. Anyway, towards the end of last week, some poor minion from the Foreign Office – presumably Miliband didn’t want the job – got the short straw on informing Number Ten about the Brussels scheme. Fresh from his television disaster, the Prime Minister declared this to be political gelignite.

Much phone-smashing and yelling, until somebody pointed out that a senior British diplomat in Brussels was on the blower. The gist of his information was that both French and German colleagues had been in touch to ask him whether by any chance the Brussels lads had gone entirely round the bend, only Angela and Nicolas were having huge litters on the subject of effing Belgian bureaucrats telling them how to spend their money.

This is of course why we have the Eurocrats in Brussels: only they have managed in the last ten weeks to get the French and Germans to agree about something. The following day, the German press had a high old time. The Suddeutsche Zeitung was quick to point out that Belgium had been in everyone’s way since the dawn of time, quoting Social Democrat MP Carsten Schneider as saying that if the Bundestag were to give up its budget autonomy, “this would be the end of parliamentary democracy as we have known it so far…Never, ever will I agree with that.”

The other Parties rapidly followed suit, Shadow Finance Secretary Norbert Barthle dismissing the idea as something that ‘will never fly’. This morning, Handelsblatt ran a piece observing that the Brussels clown-factory is now the only thing that annoys Germans more than political correctness. I must say, deep down I’ve always liked the cut of Jerry’s jib.

All this has cheered Gordon up no end – but not the up-and-down man Lord Mandelson, who doesn’t want to get into the position of having to criticise the EU, as his golden pension handcuffs from Brussels forbid him so to do. Having talked up Nick Clegg to tease the Tories, he now has to face an Opposition whose Euroscepticism in some quarters looks likely to be proved correct.

Meanwhile, back in Paris the Finance Ministry was quick to point out to Sarko yesterday that siding with Berlin could only be bad for France in the long term – what with French fiscal discipline not being all it might be…and the regular German money in the EU pot coming in a bit handy at the year-end. Thus it is also rocher et place dur for M. le President – because if he supports Berlin, the UMP Right will have a field-day; if he attacks Brussels, the farmers will road-block every autoroute in France; and if he does nothing, the Parti Socialiste will call him an anti-worker lame duck. Couldn’t happen to a nicer bloke.

I mean I’m sorry, but how could anyone take these people seriously? We have Morgan Stanley’s head of research Joachim Fels (influential, and no slouch) saying that a Eurozone break-up “has clearly become more likely”…..and the Eurocrat solution to that sentiment is to get even further up the Hun nostril. Joachim – obviously an avid Slog reader – repeated our message: a Greek bailout now looks like a political necessity, but “it is storing up much bigger problems down the road”. True, but the previously referred to Belgian pen-pusher has also thrown the British election a curved ball….and given Sarko more headaches than the rumours about his marriage. I mean what is ‘e like?

It almost makes you want to vote UKIP. But not quite.