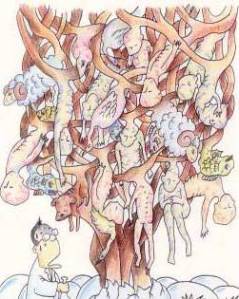 Every day we read and hear about individuals doing odd things. Today there was a piece somewhere about a bloke who’d trained his goldfish to ring a bell. That’s eccentricity: it’s about species variety and is a healthy sign. When Britain was top-dog nation a century ago, our eccentricity was world-renowned.

The time to worry about the genetic health of a ‘tribe’ (or nation) is when large groups of people all do the same odd thing – ‘the wisdom of crowds’ is ironic rather than literal. In Germany after 1933, for example, a large proportion of the nation believed crackpot theories about a slim, muscular and blond master race with perfect eyesight; the promoters of this theory were almost all dark-haired or bald, fat and short, and wearers of sinister pince-nez pebble glasses.

I’m beginning to wonder (as larger and larger mad crowds of human beings seem to inhabit the planet) whether the whole human race may be suffering from a degrading gene pool that must reduce variety and thus creativity. Ever since a young geneticist told me three years ago that our gene pool is “similar to those discovered in extinct species” I’ve been thinking about this.

Today I read up on Maoists in the Indian region of Junglemahal. The thoughts of Chairman Mao are those of a deranged and murderous paedophile – because that’s what he was. He in turn learned his ‘thoughts’ from a bloke call Marx who, towards the end of his life, told a French newspaper “Speaking for myself, I am not a Marxist”.

It seems Junglemahal’s Maoist rebels believe that the Marxist dialectic about the State’s organ’s ‘withering away’ is demonstrated by doctors, policeman and charity workers being too terrified to go anywhere near their stronghold. This is madness on an elevated scale, but not as yet at the dizzy heights of North Korea’s Kim family domain. (Follow that link for yesterday’s barking update).

For me, the most discernible trend evident in history since around 1960 has been the rise and rise of unsupportable belief systems. Be this Harmanite feminism or Friedmanite economics, credit default swaps or Haile Selassie’s immortality, the syndrome remains the same: clinging to bollocks when an Andean mountain range of evidence says that yes, this idea is indeed 100% gold-plated, factory-tested bollocks.

Saying “we have always been like this” is relativist rot. Mediaeval belief in demons was an entirely rational conclusion given the knowledge base of the time. Phlogiston was an inspired explanation of elemental behaviour for sixteenth century scientists. The sun orbiting the earth was, based on observation, an apparently obvious extrapolation – rather than Roman church mania as viewed from 2010.

No, the tricky part is explaining how in 2010 billions of people believe in hordes of sluttish celestial virgins, the ramblings of a repressed Edwardian Viennese Jew, and that 0.3% of the population amassing huge amounts of capital will then trickle this down to the grateful recipients beneath. And answering “Ignorance” doesn’t cut it: do we really believe that Ahmadinnejhad could understand nuclear fission and propaganda spin, but not the unlikelihood of fiery chariots in the sky….and be normal? Can Kim il-Jong know how to wind up the Super Powers but believe in the divine right of his family to rule….and be well-balanced? And so on, and on and on. Can a Brussels bureaucrat or Frankfurt ECB banker at one and the same time understand market economics and allow the central buying of worthless bonds….without being the owner of a splattered mind?

I worry about this because I don’t want my (or anyone else’s) grandchildren to spend their lives needing protection from barmy people or – God forbid – them turning out to be bonkers too. Are my fears unfounded?