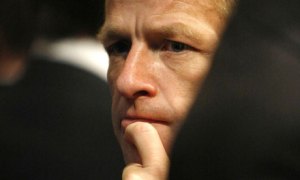 David Laws may be the victim of more
than just a homophobic newspaper.

Over the last 24 hours, I’ve been digging into the David Laws case more deeply….and reading as much as I could about the man. I have also finally made contact with The Slog’s favourite LibDem mole.

I want to offer an apology to Laws this morning – not because he reads this site (he doesn’t) but because first, in the light of what Slogger’s Roost has since learned, I appear to have made an error of judgement – and the readers deserve to know this.

It seems that Laws’ chief motive was to hide his sexuality – and given his treatment by the Telegraph, he was right. Fine, he’s rounded up the odd expense claim here and there – but he doesn’t claim for his house in Somerset, and it was the 2006 expenses rule change on ‘partners’ that caught him out. He has since bought a property separate from James Lundie. And last but not least, he did the decent thing by resigning quickly, honestly and unreservedly. I got that wrong: he is a better man than I thought.

Secondly, however, there are some aspects of this case – circumstantial at the moment, but they’re there – which suggest there might be more to this case than has been made public. Funny how you dig for something….and then find something else.