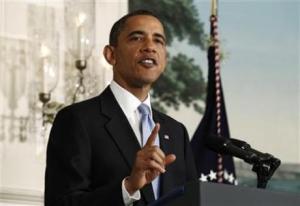 The White House wise guys in charge of Obamite thinking have been floating the idea of ‘letting off’ many mortgagees who find themselves at or near foreclosure….or ‘underwater’ as the Americans call it. With Congressional elections coming up – and a GOP landslide on the cards – this probably felt like a clever wheeze….even if it would be rewarding stupidity.

But the Rasmusse poll this morning shows fully 63% of voters think a government mortgage forgiveness program is unfair to those who have been regularly paying their mortgages … and only 23% who disagree with that statement. (You have to think that quite a few of that 23% have the water pretty near to their necks).

As you’d imagine, 67% of Republican-registered voters disagree with the plan – and add that it would be bad for the economy. That’s surprisingly few more versus the average, and would tend to suggest that Obama’s idea is deemed ‘Unamerican’ across the piece.

Just to demonstrate how hopelessly out of touch the Washington set is, Rasmusse also polled the political class – and found 68% in favour of the scheme. Well I never.