It’s good to be back, but it would be better if some things had changed.

“We are here demonstrating because our rights are being impeded on” said a student on the BBCNews channel last night. We then cut to a very 1970s scene of slogans and banners. ‘F**k fees’ said one. As ever, the ignorant are condemned by what they write, and the pretentious nature of what they say: it was all very Fred Kite rather than Tariq Ali. The dumbing down of radical erudition is indeed a matter for national shame.

“I mean,” added a breathless young man, “I mean look, this is what happens when you repress an important elite group like us”. Well, quite.

A recurrent feature of debate about policy direction in the UK today is that of the idiot with no case being given an aperture via which to complain by the Establishment’s moral failure. Just as the bankers have handed a free gift to UNITE, so too has the Coalition’s muddled Further Education policy given lots of agitprop to young Mrs Malaprops.

Nick Clegg was on Radio 4 wittering about compromise again this morning, just prior to the half-educated barbarian hordes moving on to trash his Party headquarters. ‘Compromise’ in this instance is, however, a euphemism for dilution.

Further Education funding is in crisis for one reason above all others: the substitution of merit with ‘equality’ as the criterion for University entrance. The simple answer is to go back to sending only the brightest and the best to University, and streaming the also-rans into more vocational learning institutions. This would, obviously, solve the entire Further Education funding ‘problem’ at a stroke.

DoE records suggest that, in 1950, only  5% of the learning population were doing a degree at any time. Given the courses took at least three years, then at best 2% of UK pupils became graduates each year. In 1963, the report of the Robbins committee on higher education proclaimed the ‘Robbins principle’, that university places should be available to all who were qualified for them by ability and attainment. (My italics). This represents the last sane piece of enlightened educational legislation in Britain.
I remember the Careers Officer at my Grammar School telling me, as my offer to study History & Politics at Liverpool was confirmed in July 1966, that I was “now part of the 2% elite”.  Eleven years later in 1977,  this meritocratic elite had reached 15%.
According to Robert Anderson’s British Universities Past and Present, in 1980 there were 47 universities in the UK with 282,960 students – probably an intake of about 80,000 undergraduates a year. Successive UK Governments then increased the proportion of 18 year olds going into degree courses over the following 30 years, until by 2009 481,854 students were given places to start reading for degrees. This in itself represented a rise of 5.5% in just one year.
The process of lowering entry standards was of course given a huge boost by the 1988 Education Act, which paved the way for the grant of university status to polytechnics in 1992. This was widely (and rightly) seen at the time as a dilution of academic excellence. And once the New Labour target-robots got into power after 1997, that casual award of elite status to dismal places like Aston ‘University’ was exacerbated by the increasingly alarming trend to having A-level pass quotas replace actual student performance.
The Slog has researched myriad examples of just how easy it is in 21st Century Britain to pass an A-Level – and how few University course options are in any way tied to professional relevance in later life. I’ve also looked at how some exam questions are not so much ‘education’ as naked social engineering propaganda. In 2007, Mary Beard wrote in The Times, “I know of at least one A level examiner who has given up because he was forced to mark down candidates who wrote really intelligently about a subject but didn’t give the points that were demanded by his ‘marking criteria'”. In 2009, Trevor Nunn’s wife Imogen Stubbs described how the couple’s encouragement of their daughter to think for herself when answering her Drama A-level questions led to her being failed. Thinking outside the box, do you see: that’s not allowed any more. Conform or die.
As The Slog insisted earlier this year, an educational revolution is necessary if we are to equip citizens with the right discernment tools to screen out government and commercial spin – and with the skills that both employers and householders need. Michael Gove finds it hard to face the reality that not only are kids woefully under-challenged by our education system, poor and politically biased teaching will not change until mediocre teachers are cleared out.
When it comes to education, radicalism is the new responsibility. But Coalitions are rarely radical. 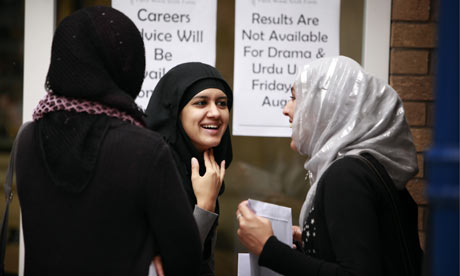 In touch as ever, this was the Guardian view of what students look like today