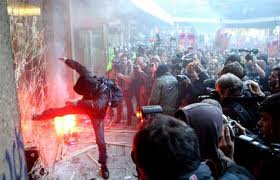 Trebling their own truth – and ignoring yours – is de rigueur these days at The Guardian.

It was a riot being in Westminster yesterday. The BBC’s Ben Brown told viewers that students had shouted ‘shame on you’ as the passage of the tuition fees bill was announced. He probably had to search a long time to find such erudition; other news stations were less lucky, interviewing yet more evidence of just how thick and ignorant you can be these days and get to Uni.

Of course, as all good Guardianistas know, the wicked Coalition is only going to let Etonian toffs and the middle classes into further education from now on. I mean, they’re trebling the fees. How can poor families afford that?

Throughout the discussion about University tuition fees, the Guardian has stuck to its contention that all fees will be trebled. ‘A wave of protest spread through London yesterday in the the wake of a trebling of tuition fees’ its gullible readership was told this morning.

Here are some factual excerpts from the proposals passed by the Commons yesterday: (My italics)

Over time, I have made my view perfectly clear about University education: it should be free with a non-repayable grant, but the numbers going on to full-time further education should be retricted to those who are really bright, as opposed to those who pass the entirely risible A-level examinations.

But setting that aside, the facts above (and that’s what they are – fact from the Act) make startling reading when set against media coverage on the fees issue. The current maximum charge for a year’s tuition is £3290, so in the vast majority of cases the fees won’t even be doubled, let alone trebled.

Free placement for the bright and disadvantaged, increased maintenance grants for poor kids, and interest-free repayments for low earners are all to be found in the Act. But not on the BBC. And most definitely not under any circumstances in the Guardian.

The clique currently keeping an iron grip on content down at Kings Cross these days are nothing if not thorough. ‘Reality shall not pass through these portals’ seems to be the gist of the paper’s approach to ‘news’.

’21 Oxbridge colleges took no black students last year’ trumpeted the Guardian indignantly last Tuesday. In Guardiworld, saying this seems to be grounds for a clear-cut case of social exclusion. In case you’re wondering, by the way, the paper was talking about those in Britain of Caribbean descent. So having established that, let us ponder for a minute on what it might mean.

Is it that familial splintering and lack of familial discipline mean very few West Indians are motivated to go to Oxbridge? Because that has been the consistent finding of eductional researchers in South London about black boys in State schools for some years now.

Or is it that Oxbridge is peopled by foul racists who want to keep the blacks down – in the same way they wish to keep out all children from sink estates and inner-city Comprehensives?

Or is it that families from sink estates care little for education, and inner-city schools are absolutely awful? Well, the Guardian is in no doubt.

‘The FoI data also shows that of more than 1,500 academic and lab staff at Cambridge, none are black,’ the article continued. The same hypotheses might well apply to this finding too…..were it not for the fact that it’s not true.

Over the following two days, various bloggers (and the Daily Telegraph) used the simple ruse of going to Oxbridge facebooks and HR sites to look for black faces. And there seemed to be lots of them.

The whole basis of the Guardian piece is hopelessly polemic, sloppy and blinkered. The paper notes that ‘A total of 77 students of Indian descent were accepted, out of 466 applications’ as if this too was a sign of exclusion. But a quick call around some senior teaching chums confirms that this figure is on a par with whites in some sixth forms.

However, perhaps the dons are selectively racist: sort of ‘darkish brown Indopak is fine, but we’ll have none of your black thugs thank you very much‘.

It’s not very likely, is it? But ‘not very likely’ is a challenge that the Guardian mindset simply cannot resist. Never mind that the only two dons I know are gagging to find some underprivileged geniuses they can display – if only to keep the unhinged pc quota-Nazis off their backs. Never mind that middle school data show how sink estate/ghetto brightness is there, but underachieves. Never mind that, for thirty years, the Guardianistas argued consistently that racist achoolteachers were holding kids back (Ever meet one of those?). But for the G-men (and wimmin) life remains simple:  ‘We’re right, because we’re progressive‘.

In April this year, Big G ran a story about the cancellation of Bob Dylan’s proposed tour of the Chinese mainland, headlined ‘China blocks Dylan gigs’. I have been unable to find any evidence that the paper spoke to anyone except Dylan’s agent Jeff Wu, a man who locals tell me has been peddling this version to anyone who’ll listen.

But he would, wouldn’t he – having screwed up the economics of the proposed tour. Chinese mainland pop music critic Sun Mengjin blogged extensively about the distortion at the time. The Sun headline was:

The Guardian said the Ministry of Culture had ‘blocked’ the tour. The paper never in fact rang the MoC. As Alistair Campbell would say, “We made it all up”.

Last June, the respected social journal Prospect noted the Guardian’s blatant bias in reporting on the Gaza flotilla violence, pointing out that ‘Whatever one’s views of this incident, or of Israel, in general, newspapers are supposed to attempt some kind of balance, and not resort to the most emotive and biased reporting. Israel is clearly no longer to be treated in the same way as any other subject by the left’.

Foreign editor Harriet Sherwood refuted this, saying the paper ‘aimed to cover all viewpoints’ on the issue. Well Hattie, you missed. On the day in question, the paper’s one op-ed piece was a non-stop attack on Israel. All five submissions on the letters page took the same view. The first five pages of the paper were dedicated to the story: they stuck rigidly to the Palestinian view, displaying an almost student newspaper level of distortion.

Perhaps that’s what the Guardian has become – a dumping ground for grey hairies who never quite got over Thatcher: a newspaper staffed by those who were sitting-in and occupying forty-five years ago, but never actually got off their backsides to occupy themselves with something useful.

But I doubt this. Those running the show in King’s Place aren’t fluffies. They’re on-message politically correct fascists who simply will not tolerate any other viewpoint beyond the world according to Harriet, Jack and Ed. If you want an open-minded discussion of genuinely new socio-economic and political thought in 2010, don’t read the Guardian. Not only is it wrong about almost everything, it simply doesn’t present the facts. Sloppy or Stalinist, what’s the difference? It’s a rag, and a disgrace.