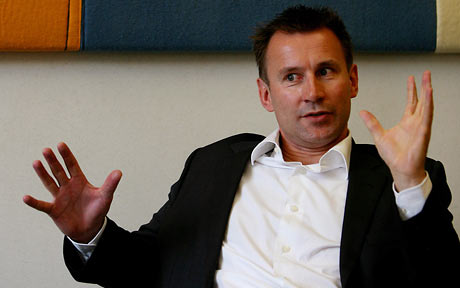 Jeremy Riming-Slange….”I mean hey, we could make the ban this wide if you like”

Following yesterday’s Slog piece about where anti-Max Mosley triumphalism will inevitably lead, there is more Hunt Balls this morning to suggest I was right on the money.

Culture Secrtary Jeremy ‘Basil Brush’ Hunt last night declared the existence of superinjunctions against the press (while Twitter could say whatever it liked) “ludicrous”. As it happens, as usual he’s wrong: it is actually very easy to get a Tweeter silenced. But this left me with an uncomfortable feeling about what Jezzer meant: was he all for getting rid of superinjnctions? Or did he want them for the internet as well?

The answer (kind of predictable, really) is there for all to see in today’s Indie: (my italics)

‘Ministers are to hold emergency talks over the celebrity super-injunction imbroglio that could pave the way to a privacy law and an attempt to regulate social networking sites.

As the names of public figures alleged to have taken out ultra-restrictive gagging orders continued to circulate freely on Twitter – and newspapers from Spain to Peru repeated their identities – Culture Secretary Jeremy Hunt said the proliferation of information on the web had made a “mockery” of current privacy rules.

Mr Hunt raised for the first time the possibility of a new watchdog to ensure that social media such as Twitter and Facebook were subject to controls similar to those faced by the press and broadcasters, saying there may be a case for converging the regulation of traditional and new media.’

I do not doubt that the letter-box screamers, intellectual luvvies, phone-hackers and Cable-recorders will be up in arms. What none of them seem able to grasp is that free-speech restrictions and privacy invasion are not even two sides of the same coin: they are a continuum. Privacy invasion for editorial purposes gives permission to ISPs, security agencies and advertisers to indulge in the same calumny. And then the minute citizens decide to use that facility for awkward criticism, in comes a new law from the politicians, who think they’re smarter than the judiciary. One wonders precisely how dangerous in libertarian and constitutional terms this needs to get before the Fourth Estate works it out.

The double-standards surrounding this topic in corporate, media and governmental circles beggar belief. For example, go to the MSNBC blogsite The Last Word, and see if you can get rid of the commercials which now dominate the whole screen. You can’t: the only way to get to the editorial is to sit and watch some bonus-bashing oilco lizard wittering on about how getting gas from shale is going to make the planet safe for Democracy. As a former adman myself, I have been monitoring this trend for more than a year now; it is still relatively rare in the UK – but most corporately owned American sites are moving over to a system whereby you will be irritated the moment you land there. They must be mad.

Argue with Orange, and they will close you down from all internet usage in short order. Criticise Ed Ball’s risible performance as Minister for Children at his tweeting Home, and straight in the sin-bin you go. Have a go at Microsoft, and they will lean on your site-host. Say something AOL doesn’t like, and you’re banned….unless you grovel. Post a blog criticising Harriet Harman at The Guardian, and you’re out.

This is a sort of hybrid behaviour I’d call ‘censorship invasion’ – an active and pernicious attempt to enter your home and rip all the plugs out of the wall.

However, hack the mobile phone of everyone from the Royal heir apparent to the Prime Minister, and you’ve obviously got The Right Stuff when it comes to taking on the enviable role of competing with all those nasty anarcho-syndicalistas infesting the BBC.

All that’s required of the UK media set from here on in is a sense of proportion, and a willingness to obey PCC rules. But look at the Hackgate scandal: the press revels in ignoring the PCC, and laughs at its pronouncements. And so now there’s going to be yet another area of freedom where a voluntary approach no longer cuts it.

This is our core cultural problem: mistaking license for liberty. As I have written many times, if you can’t control yourself, then the world is full of Hunts ready and willing to control you.