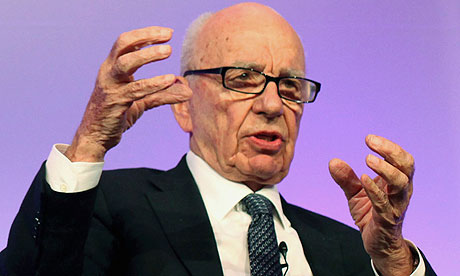 As long as Camerlot fears Murdoch more than us, Newscorp is going to get away with this bent approval

Jeremy Hunt was 15 when Rupert Murdoch bought the Times titles off Thomson. So he probably won’t remember all the undertakings, promises, non-exec directors and watchdogs that were used to quieten opposition back then. I have to assume this, because it is clear from today’s announcement by the Culture Secretary that Murdoch is about the pull precisely the same stunt to get the BSkyB bid approved. Of course, it could just be that the oleaginous Hunt is stupid; but more likely, he is simply doing as he’s told.

But to show fairness and illustrate that he is the complete Hunt,  he has added four extra conditions to the deal:

The government received more than 40,000 representations in its consultation, but said there was ‘nothing to change its earlier view that the spin-off of Sky News would make the BSkyB takeover acceptable’. Not 100 civil cases for phone hacking, then? Not 30 years of pernicious influence on politics? Bribing coppers? Probability of senior Newscorpers facing criminal charges? Well no – the Government does have a point here: the scheming, corrupt criminality was there before, and it’s still there now. So why change your mind?

Enough: we’ve been over this terrain so many times before. The main reason that Camerlot feels minded to accept Rupert Murdoch’s BSkyB bid is because they are infinitely more scared of his power than they are of ours. It’s as simple as that. At the moment – and it’s important we all grow up and face this – Newscorp is going to pull this deal off. I am still of the view that even if it does, afterwards the filth will all float unpleasantly to the surface. But will it matter by then?

There are six key reasons why this grubby arrangement is going largely unopposed by the majority of Brits:

1. The news is dominated by economic meltdown and Greek riots.

2. Individuals and families are very concerned about their personal outlook, and whether they’ll have a home this time next year. Who owns what newspaper is a matter of extreme indifference to them at the best of times: at the moment, it’s miles away from any radar out there.

3. As Andreas Whittam-Smith wrote splendidly this morning, Murdoch’s real domination of the UK media market – as in all media – is being hidden by just this one deal.

4. The most high-profile objectors to the takeover tend to be people in the liberal-to-Left axis of British politics. They tend to express their opposition in terms both pompous and polemic. Middle England loathes all that bollocks. It also notes that not a single member of the Tory Party  has come out against the deal.

5. The newspapers these people read are the only ones pursuing Newscorp criminality and police/political cover-up with energy. Most of the time, mainstream British opinion is unaffected by the revelations.

6. Irony of ironies, the distraction offered by Murdoch’s highly marketable mix of cheek, prurience and sport means that Essex Man actually loves what the old bugger has to offer. Destroying Newscorp, perhaps they think, will put an end to those big plasma screens of a Saturday and Sunday down the pub. Rupert Murdoch has, in fact, played a major role in brutalising the culture in a way the majority of citizens at worst tolerate and at best enjoy. Whereas 73% of Greeks strongly oppose their country being auctioned off, I doubt if even 25% of UK voters know enough about the BSkyB deal to have any opinion either way.

This isn’t defeatism, it’s realism. It’s going to take a Dictatorship of the Awake to stop this now. No longer can most of us sit back while the Guardian and the Independent dig up evidence of pointing the finger at most of the UK’s senior Murdoch personnel. As with most things today, the cops are corrupt and the Government doesn’t care: it’s up to us.

What can we do?

Well for starters, you can go the Avaaz website and send an email giving your support to its opposition to the deal. The statement there is, I’m afraid, syntaxically the rather Leftist idealism I mentioned earlier. But it’s in a good cause: send the email. They’ve only had this page up for a day or so, and already they have over 370,000 supporting votes. While your at it, share the page with every social network you’re on…especially MySpace, which the Antipodean Genius was forced to sell yesterday for 10% of what he paid for it ho-ho. He lost half a billion dollars on the deal – he IS in trouble. Without this BSkyB deal, he’ll be in even more trouble.

Next up, you can pay heed to what Whittam-Smith wrote this morning:

‘….the Murdoch share of the combined daily and Sunday circulation of national newspapers is currently around 35 per cent. The Daily Mail group is in second place with a 20 per cent market share. But there has been no inquiry. In no other industry would the matter have been left unexamined for so long….’

In short, under the Monopolies Act, Murdoch’s press ownership is illegal by 10%. Why hasn’t this been rectified? Bombard the MMC with this question. Do the same to Basil Brush at Culcha. Jam the switchboard at Number Ten.

Enlist the help of Americans – they hate Murdoch even more than we do. Give them the Avaaz link – get them to vote. Get them to email their Congressional representatives. Explain why this could help get rid of Fox News. After my spat with them, this sticks in my thoat: but comment thread at Huffington post, again with the Avaaz link. Huffpost readers loathe the Digger. Do the same at The Daily Beast: the editor’s old man is Harry Evans – the first Times editor screwed over by Rupert Murdoch. Enlist Tina Brown’s help. If you know Harry or people close to him, enlist his too: he’d like nothing better than to poke Merdeschlock in the eye.

But in the end, the three things most likely to stop this atrocity coming to fruition are Government fear, high-profile Newscorp arrests, and civil Court proceedings….during which senior names such as Brooks, Murdoch (James), Coulson and so forth. Whacking these Newscorp achilles heels requires more thought than I’ve been able to give to this so far – but if you’ve got ideas, then let’s hear them. This is now open house and open season until the BSkyB deal is either done or dead.