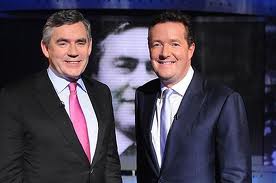 Dear old pals about to break the Broadcasting Act

Yes thank you there, Ed, very good. Let’s hope your nose job at least cures the irritating part of your speech patterns, even if it can’t do anything about that OCD cross you bear. But please, do us all favour can you, and unbrief all the other Labour robots on the subject of endless repetition about “not getting it”?

Because it could so easily blow up in your face – and destroy the nose job (done privately for £1300 Ithangyoo) which has caused such widespread snoring among your audience to date.

Ed Miliband himself didn’t get it until just a few short weeks ago. Or rather, he did get it – ‘Crikey Tom, have you read this? It could sink all of us. Are you sure I should be meeting this Rupert bloke?’ – and that’s why he waited fully five months after the Newscorp solids began flying before making David Cameron squirm. And of course, most of the offences, about which we read day in day out now, took place during Blair and Brown’s watch. Just look at all the pictures with Andy Hayman at Blair’s side. Or shots of Brown boozing with Morgan…while they both plotted how to script a PPB – and then disguise it as a chat show interview.

But there I go you see, being partisan again. Why do I feel the need to? The answer is because, in the last fortnight Hackgate has moved on from being about righting a wrong, to being just more of the same old Left versus Right. For months, Tom Watson and Chris Bryant (both Labour MPs) ploughed a lonely trough while their leader Ed Miliband gave them the “You hit him and I’ll hold your coat” speech. When it became clear that Newscorp was irretrievably mired – and only then – did the Liebour Ladyship join the fray. So it’s no coincidence that, since the day it did, the agenda of Get Murdoch changed to Get the Tories.

The words ‘Tom Baldwin’ do not appear in any of the Guardian’s Hackgate stories this week – I know, I’ve done the Thesaurus check and a full search. But they do mention people apologising to Piers Morgan. Rather a lot, actually. As long as Alan Rusbridger sees a possibility of the Mirror’s demise as a result of what’s now emerging, that’s going to be Big G’s tack – until such time as the volume of grime at MGN becomes so apparent, they have to tag along grudgingly. (For the Guardian now, read the Barclay brothers’ Telegraph Group until two months ago: they’re all as bad as each other).

Tom Watson has yet to utter the phrase “Mirror Group Newspapers”. Unless my memory’s defective, he hasn’t mentioned Piers Morgan in a single tweet. He just wanted to get James Murdoch back to the Star Chamber, and wind up the Met to start an email-blagging Unit. He is absolutely right to have done both those things. But why hasn’t he asked for Piers Morgan, Sly Bailey and the folks at Vodafone to attend the CM&S committee? Ah well, you see, um….that could rebound on us, hmm?

To its eternal credit, the Independent is living up to its name by bashing away at the rotting door that was once Piers Morgan. James Hanning and Matt Chorley have a piece today gently pointing out that Piers Morgan took possession of letters in turn stolen from James Hewitt, the former lover of Saint Diana. I’d imagine the libel laws have stopped them from spelling this one out more, but the same duo are still also hammering into Newscorp with an equally revealing piece  helping the confused reader understand how Harbottle & Lewis’s ‘opinion’ on Murdoch’s 200 Royal emails was just another Wapping Lie.

But aside from the Indie, the rest of the mainstream media are reverting to role: “Seefingizzlike, what we do, right, is, er, cover up the nasties on our side, and invent new ones to chuck at the uvva lot, right?”

Something tells me that Chris Bryant probably won’t do this – as the impression I have of this chap is that he is a gent, and thus very happy to wave the watered crucifix at every Devil he encounters, regardless of Party. But like David Davies on the Tory benches, he is a notable exception to the general rule.

What the politico-media axis don’t get about Hackgate is that the curtain is about to come down on their cosy game of back scratching and stabbing. And they don’t get that Hackgate is the worst symptom yet of a knackered culture, the knackering of which is largely down to their polemically blind and cynically tactical can-kicking in the past.

That process became critical with MPs’ expenses. It gained further traction via the disgusting, childish and devious way MPs then dealt with it. That in turn was followed by the realisation that David Cameron would do anything to let Rupert Murdoch and his vile empire take over from the BBC. (I deplore the BBC too, but my motto remains ‘Anyone but Newscorp’). When this too was amplified by the depraved actions of senior Newscorp personnel – all either employed by or close friends of Camerlot – the PM waited until the very last second before, under extreme duress, reversing his decision to let the odious Jeremy Hunt just get on with business.

In this, he was no different to Blair and his Iraq War/EU policies being directly driven by Murdoch – a fact loudly reported by the good TV works of another Hackgate hero from No Side, Peter Oborne. But the pols are still arguing for cheap political gain.

What’s about to happen is a broadening of Hackgate into fuller diagnosis of yet another cultural descent into the slime: the growth in, and active commercial encouragement of, the Personal-Information-Instant-Fame Business; and the erosion of business, media and political ethics in exploiting (rather than tackling) such an appalling malaise.

All the bread, circuses and bollocks surrounding the activities of phonecos and what they get up to may still come out. All the fakery beyond Piers and Gordon’s televised (and scripted) love-in during May 2010 will also go under the spotlight. Some of the as yet unreported nastiness of Simon Cowell and all his ghastly works will emerge during the public garrotting of Piers Morgan. Facebook’s darker side should emerge, as will that of Google, in their remorseless search to know everything about everybody…..by making them feel more famous and important than they could ever be in reality.

Reality is once again the key word here. The lesson to be learned from Hackgate – and for that matter the Strauss-Kahn affair – is actually a very simple one: our Anglo-American culture has become addicted to fakery. Election to public office has become about making things look other than they are. So too has populist television and biased media reporting.

The bottom line is that millions of citizens think they are important enough to be famous, and in this they merely reflect the over-inflated egos of those who are. The drive of everyone to achieve some kind of public profile has not only distracted both the leaders and the led from the real cultural and economic issues we face: it has invited Big Brother into all our phones, computers and homes by the front door.

Over in the States we see intransigent, media-addicted Congressmen refusing to budge from their impasse with a President who was elected by that same addiction. So too, in the UK, do we see the opportunists scrambling to gain a few feet of ground on their way to be first over the cliff.

I have for many years now said that opportunists are people who always miss the real opportunity. Blair demonstrated this rule admirable after his 1997 landslide, and our Establishment leaders have done it again on Hackgate: faced with the chance to raise themselves at last in our estimations, they have descended into the cess pit of advantage the second it became available.

This is why it isn’t just David Cameron who “doesn’t get it”. None of them do.