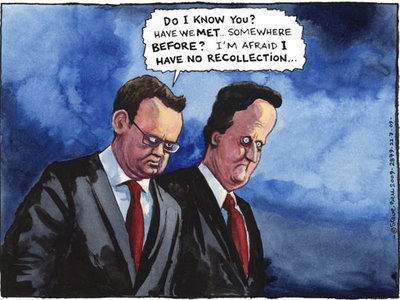 Why the Slog is more interested in ‘testimoney’ for Tom Crone

Much as I’d like to see Andy Coulson in Broadmoor for thirty years (no fence-sitter me) Robert Peston’s ‘big’ story last night – being picked up by most of the press this morning – is, quite frankly, a bit of a non-event.

When executives as senior as Coulson was at Newscorp leave to go to another job with potential sensitivities for the previous employer, it is perfectly normal practice for the former bosses to tie that person’s severance package to ‘good behaviour’. Coulson didn’t leave the NotW of his own volition, he left because the arrest of some of his employees became a resigning matter for him as the Editor. From what I can work out, Murdoch sent him on his way with a year’s money and continued access to his benefits over that time. To suggest that this is evidence of Coulson being ‘a mole’ for his former employer merely displays an ignorance of standard business practice.

Of course, Coulson really left the Screws because he was implicated up to his eyeballs. I’d imagine the Murdochs gave him a less than gentle push on his way….and that the ‘hundreds of thousands of pounds’ described excitedly by Peston is merely another example of their infamous hushfund at work. That this represented payment for him to be a double-agent doesn’t fit the facts: we already know that Rebekah Brooks pestered Cameron at the time to give Andy Coulson the job. He was in there giving Cameron a link to Newscorp anyway…his severance pay is irrelevant.

Far more pertinent (as I posted yesterday) is the contempt of Parliament displayed by Newscorp’s decision to pay their former senior legal beagles over 1.5 million quid of severance each….to be available for trousering after they’ve given testimony to the Culture, Media and Sport Committee. Now that really is unusual…and another classic case of great journalism from Private Eye.

The Eye, as ever, is politically unaligned. But I continue to smell political agendas elsewhere. After its initial shyness about hacking stories, the Barclaygraph is now up for anything in this area that might destabilise the Coalition and do for Cameron. This was always the Guardian’s main focus anyway, and I have yet to see any sign of the Guardianistas burrowing into the obvious sh*thole at MGN with quite the same gusto they displayed for the Newscorp task.

Perhaps Louise Mensch would be better off giving this some consideration – as opposed to constantly seeing plots to destroy her, which then receive blanket coverage in the media.