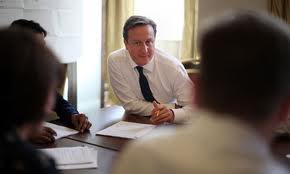 During one rousing speech at the Tory Conference yesterday, the Prime Minister was given some much-needed counsel.

‘leadership in the world is about moral strength as much as military might.”

‘the things that will really deliver success are not politicians or government.’

‘Half the world is booming – let’s go and sell to them.’

‘we need to tell the truth about the overall economic situation.’

‘The only way out of a debt crisis is to deal with your debts…..And it means governments – all over the world – cutting spending and living within their means.’

‘it falls to us to clear up after the Labour Party. I have insisted that we do it in a way that is fair.’

‘we won’t get jobs by growing government, we need to grow our businesses.’

‘ The new economy we’re building must work for everyone.’

‘Rigour back in learning. Standards back in schools. Teachers back in control.’

‘Let it be us, let it be this government that finally builds an economy where no one is left behind.’

‘if the system keeps fudging the difference between right and wrong, we’ll never improve behaviour.’

The speaker was, of course, David Cameron himself. It is something of a truism for comic writers that a great deal of humour is generated by the often huge chasm between spoken aspiration and actual achievement. Although marking a classic example of its kind, the Tory leader’s speech yesterday didn’t amuse me at all. It just confirmed me in my disappointed anger.