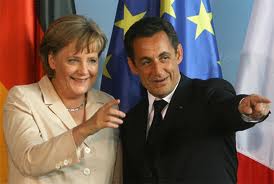 The Slog has learned in the last hour that there is consternation in Berlin about a fresh drive from the French to obtain immediate access to the EFSF. Despite being given a firm ‘No’ to this by both Chancellor Merkel and the G20 at the weekend, I understand that a broad group of French officialdom is pushing to isolate the German leader by presenting “a terrifying picture of French banking collapse without access to these funds”, said a source in Brussels. Frau Doktor Merkel herself is said to be ‘furious’ that valuable time is being lost in the slow progress towards a debt crisis solution because of France’s persistent attempts to get EU help for the French banks back on the table.

Earlier in the day, Chancellor Merkel had met with CDU Party bigwigs to give frank answers to their continuing concerns about EU members – including France – avoiding their debt guarantee responsibilities and leaving Germany alone to face the eurozone’s creditors. At one point, she described progress on a crisis roadmap as “moving at a snail’s pace, millimetre by millimetre”. Other sources in Frankfurt have also confirmed that briefing by French officials is “obviously designed to put Germany in a corner” and causing great resentment in Berlin. At one point over the weekend, several leading financial media were confidently asserting that France and Germany were close to agreement about both the EFSF boost and bondholder haircuts. “Nothing could be further from the truth,” a Frankfurt media contact told The Slog yesterday.

And today my Frankfurt banking mole was unequivocal:

“It is very clear what is happening. The French and some south European allies are pushing up expectations in the hope that Germany will feel obliged to go along with it in order to avoid distressing the markets. But it will not work. Human nature is coming to the fore now, as one would expect. The ECB is saying no more money from them. The bondholders are saying no more discounts from them. And in Germany, politicians and voters are saying no more money from them. It would be political suicide now for Merkel to go along with these crazy ideas. This is why, every day, the Chancellor finds a new way to damp down market optimism”.

There is also renewed speculation by many observers that the frantic nature of French attempts to get hold of EFSF funds reflects the Elysee’s  growing awareness of just how desperate the situation is for the Paris-based banks. But one well-connected source there this afternoon told me, “It is short-sighted to see this purely as the French looking out for themselves. If we move to a ‘first loss’ insurance system as is being suggested, a French banking collapse would destroy the whole idea immediately, because France would lose too much credit credibility, and thus couldn’t partake as a guarantor anyway”.

This is a fair point, but for many in the northern half of the EU, the diplomatic manoeuvres are being seen as another French attempt to wriggle free from being ‘on the line’ to the eurocreditors. Things deteriorated for France overnight as Moody’s gave a negative outlook to the country’s AAA credit rating. The news caused a jump in French bond yields, pushing the difference between the 10-year yield in Germany and France to a euro-record high above 100 basis points.

Meanwhile, European stocks fell for a second day after German Chancellor Angela Merkel’s office once more knocked down what it called “dreams” that the Oct. 23 summit will be the last word in taming the crisis. This was after Finance Minister Wolfgang Schauble had the day before tempered rising market expectations by declaring that the European leaders’ summit won’t present a comprehensive solution to the crisis.

The US media are in turn becoming rapidly aware of the reality behind the French spin:

“We’re really in a bind here,” Carl Weinberg, founder and chief economist at High Frequency Economics, said in an interview with Betty Liu on Bloomberg Television. “We have a lot of egos, a lot of national interests, a lot of political considerations, and that’s just hampering us from getting to a solution.”

Oh dear. And it was all going so well.