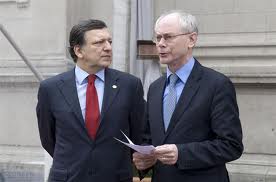 “Once the markets get over the joy of not being dead, they will call last Thursday’s [EU] deal into question,” said an Iberian based credit manager last night, “In fact, it’s already happening. Trichet says he wants swift action, but action to do what – beg the Chinese on bended knees? Make the Italian crisis disappear? It doesn’t get any better. But it will get a lot worse.”

Totting up the eurobollocks saga in Tenerife airport yesterday, I made last week’s non-event the 14th crisis summit in 21 months. The Slog exposed the complete lack of content within twelve hours, but this was hardly an exclusive: most respected financial sites (and Sloggers, based on the comment thread) saw it for what it was: desperate spin. (The FT, predictably, didn’t…the one exception as always being Wolfgang Munchau).

News has been seeping out from several sources over the last 24 hours that even some of the ClubMeds are convinced the main players in Crash 2 are clueless. They are putting out independent feelers to American government officials and senior banking executives that they could all go bust before Brussels gets anywhere near to a solution.

“They’re dumb to be doing this,” a Washington source observed yesterday, “because it shows all their cards to the market. But yes, they did put out feelers at the G20 – and not always discreetly. It just confirms what most thinking Americans feel – that it’s spiralling into anarchy over there.”

Wall Street rarely behaves like thinking America, but the Journal also confirmed in a couple of pieces yesterday that the Street of Shame had, after its euphoria at the latest 1938 Munich Agreement, worked out that Nazi troops were still massing on the Czech border. So the latest staggering piece of pompous rubbish from Rompuy & Barroso has not been playing well among those preparing to attend yet another G20 summit this week.

European Council President Herman Van Rompuy and European Commission President José Manuel Barroso boasted (in a letter to G20 delegates yesterday) that the decisions made at last week’s euro-crisis summit were ‘the kind of coordinated action needed to help revive the world economy. The EU’s contribution to Cannes [G20] is the above-mentioned package to ensure the stability of the euro area. But more needs to be done at the global level.’

The utterance of this kind of chocolate soldier Ruritanian breast-thumping hubris is simply another example of why the pathetic Camerlot talk about EU reform will  run out of credibility very soon. These two complete chumps are unelected, one a former Communist and the other a man who helped Belgium on its way to implosion…in between writing execrable Japanese poetry. A commercial entity wouldn’t trust them with managing  the Christmas Party. Yet here they are, telling the G20 how things should be done.

The other member of the standard Trio of Tosh, Christine Lagarde of the IMF, appears to have had her mouth sewn up. She last gave out a peep on Sunday 23rd, to tell the assembled press, “We’ve done some good work today. It’s real progress…..we’re heading in the right direction.” This of course turned out to be bollocks; but being pro-American by training and profession, she does at least know when to find a dark corner and hide. The other two clowns gaily stick out the glass chin, but the last thing they expect is for somebody joyously to break it.

Meanwhile, keep your eye on Mario Draghi: as the Slog predicted some time ago, he could yet turn out to be The Man who did Something Useful. If you follow the latter link, you’ll see that (as a Slog source asserted recently) he is good at being all things discreet to all people. I suspect this is what the EU needs more than anything at the minute.

The lighter view is at The Big Top

Some of the thinking behind The Slog