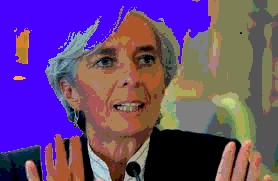 As Chancellor Merkel carries on refusing to compromise about anything ever again, the sleight of hand about how bailouts, pay-backs, and forgiveness are created has begun bigtime. In yesterday’s post here, I opined that ‘making the dizzying spectrum of funds, mechanisms, methodologies and leveraged liquidity so confusing, ordinary people give up in bafflement and go, “Yeh whatever”’ would be at the centre of last desperate attempts to save the eurozone. So it has proved: and Schauble has now enlisted Mario Draghi’s help in a bit of fascinating subterfuge.

The developing Big Idea now contains a new element: the 17 central eurobanks under ECB tutelage will, effectively, give the IMF 200bn euros….to be loaded into the bazooka that, so far, 0% of the world has leveraged up. This is just moving the chairs around for decency’s sake: national central banks would recycle funds through the IMF, potentially to provide lending programs for Italy or Spain, the two countries judged by some to be the most vulnerable at the moment. Central banks do not exist to pull this kind of stunt: it is the start of a slippery slope. And as at least some central bank funds are supplied by taxpayers, it is on example of crafty tax-manipulation to find the money….for the euro must be saved!

If you add it to the 500bn euros in the EFSF, and the amount already committed by the IMF, it is – with yet to be determined other stealth taxes I reported on earlier in the week – enough to realise the Schauble Plan – ie, debt forgiveness and bank forgiveness.

The tricky problem of how to disguise what’s being done remains. If this IMF scam is anything to go by, it won’t be subtle. But given that 95% of folks (quite rightly) don’t give a stuff, it won’t have to be.

Still, you can’t beat the Portuguese for being straightforward: six of their banks just agreed to make up the Government’s deficit for this year by giving them a ‘one-off’ payment. This must be the same one-off payment they gave the Government last year. Oh what an odd place the eurozone is.