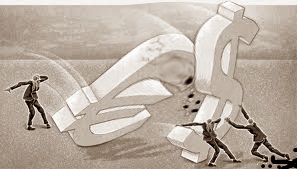 It’s 3 am GMT over this is of the Atlantic, and all is not well.

One of the enduring features of the eurozone crisis is the manner in which people take positions, and then other people assume they’ll ‘come round’ after a bit. What’s becoming clear as the late hours become the early hours in Brussels tonight is that nobody  is coming round. The EU has funked it again.

As predicted here, Mario Draghi cut the zone’s interest rates, but refused any sovereign help to ClubMeds in trouble. The markets were disappointed, but that’s because the markets remain as ignorant and self-centred as they ever were: the last thing Draghi can afford to do is alienate Jens Weidmann at the German central bank, a man whose caution on further bailouts makes Angela Merkel look spendthrift by comparison. And anyway, the Italian is simply sticking to his word: no further bond buying until such time as a credible compact is agreed. I have no doubt that early next week at the latest he will start dishing out help to the eurobanks in serious trouble….of whom there are many.The 115 bn euro shortfall shown up by the latest stress is better than some expected, but probably also less than the reality.

His room for maneouvre on widescale bond-buying is more limited. But if Mario isn’t budging, then neither is Merkel. Quite simply, she is not going to agree a several responsibility before fiscal union. We have already heard the totality of what this summit will achieve, and that was announced Monday last – a set of agreed disciplines and punishable lines of fiscal management for eurozone countries. This is as far as the German leader will go to meet the markets. Watch the lady’s lips: no joint guarantees and no eurobonds until fiscal union is completed, and the power to enforce it resides in Brussels.

Five EU members (at least) are going to reject giving that power to Brussels, the key ones being France and the Netherlands.

So the most likely outcome remains the flim-flam we got earlier in the week, but with no firm timings on either Fiskalunion or power transfers. The markets will be less than impressed – but they weren’t going to like any outcome with no final guarantor apparent.

At long last, Brussels, the Elysees and (privately) Wolfgang Schauble have accepted that reality. You either tell the banks/markets etc to f**k off, or you do what they ask: there is no in between compromise. As reported here several times, a bold tripartite plan seemed to be gaining ground on that front….but then fell apart somehow three days ago.

You can either see Schauble as the world’s most forked tongue, or a bloke who knows when to stop flicking the boulder dam with a feather duster. My impression is that his behaviour probably reflects a combination of both personality traits, but if you look back to what Germany’s finance minister wrote in the FT 3 months ago, then he has clearly moved at least 120 degrees from where he was: (my italics)

‘One central lesson of the financial crisis was that markets could only function properly if risk-taking were not divorced from liability…..[I feel]….unease when some politicians and economists call on the eurozone to take a sudden leap into fiscal union and joint liability…. This does not mean that fiscal policy in the eurozone should not gradually become more centralised. It should, as long as this process is legitimised by a strong democratic mandate.’

This position says, in a nutshell, ‘crewcuts all round, and lets take our time about fiscal  union’.

What Schauble realised at some point in the 12 weeks since then was that market risk aversion had reached the stage of wanting a 100% guarantee of money back – not the prospect of a 50-60% haircut. As without those haircuts the ClubMeds had no chance of recovery at all, it seemed an unsquarable circle.

His adoption of the Elysee’s secretly floated idea – a disguised attempt to let the ClubMeds off and pay back the lenders – would’ve lumped at least some of the burden onto eurotaxpayers. But it would have given both sides a result, and (I suspect) ended the crisis…immediately prior to completely buggering any chance of an early eurozone economic recovery.

We may never know now how Sarkozy, Brussels & Co managed to sell the simple zero-bank-haircut promise to Merkel minus the forgiveness part, but by doing so they won a huge victory: effectively, the deal would dramatically reduce the prospect of a French banking disaster, leaving the Piigs to their fate.

Wolfgang Schauble appears to have retired hurt, and also probably not a little confused about WTF his boss is up to. However, I can tell you that the two talk constantly on the phone. One pressing reason for this is that the finance minister has begun looking at the Bundesrepublik budgets for next year, and discovered some pretty big holes in them. The German people are going to wake up, after Christmas, to the reality that Das MerkeSchauble’s austerity obsession has left them with no neighours to sell to. They too can be affected by recession; and they too have enormous debts.

Pulling the strands together, Manuelo Barroso’s call this morning for unity might just as well have called for Unity Mitford to come forward and defend the Third Reich. As yesterday’s piece about the splintered 27-member Anarchy Club I think demonstrated plainly enough, they’re nowhere near a 17 nation agreement – because we’re nowhere near a Franco-German agreement. The ClubMeds remain rightly suspicious that they’ve had all the help they’re going to get, the bazooka is roughly one-third full, the debt guarantor remains anonymous, and hardly anyone beyond the utterly desperate (and Berlin) wants to cede powers to Brussels.

Into this crabby cacophony steps David Cameron, whose main task will be to gather enough crumbs from under the table to suggest he has obtained a victory for Britain. He will be the only one there who cares about this, and he probably will still be alone in his sense of triumph when he returns later today. Not only is the Prime Minister irrelevant to these proceedings, these proceedings are irrelevant to Britain’s fate….because without at least a 25% chance of solid action and clear direction, they are irrelevant to the eurozone’s fate.

The people in various financial markets with whom I speak regularly have not changed their view on any of this for over a month now: they think that either the debtors or Germany should quit the eurozone – but either way, the euro as currently constituted is a dead duck. The main game in town from here on, as far as they’re concerned, is what action the US can take to stop a horrific rollover effect across the Pond.