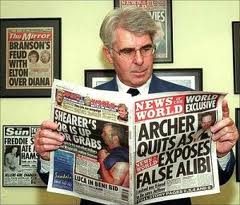 When Max Clifford told the Leveson Enquiry yesterday that “only David Mellor and his lover Antonia de Sanchez know whether the Chelsea shirt story is true”, he uttered a terminological inexactitude in that his calculation is almost certainly out by several million. Anyone watching the Parkinson Show regularly ten years ago will know that the story was complete invention. From the transcript of the show where Parky meets Master of Spin and serial liar Alistair Campbell:

MP: So tell me Alistair, what was your best story over the years, do you think?

AC: Oh, undoubtedly the David Mellor doing it in a Chelsea shirt thing.

AC: And you know the best thing about it, Michael?

As I don’t remember this event coming up in Chemical Ali’s “evidence”, I wonder if the Leveson Enquirer will now wish to re-interview its witness?

(Above) The BBC’s official shot for the Show