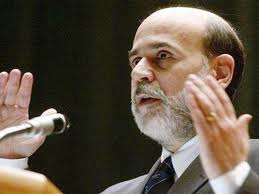 I’m pretty sure that Ben of the manicured Beard doesn’t read The Slog, but his generalised pronouncements on the US economy certainly mirror mine.

He reminded everyone that almost all the 2011 Q4 growth came from retailers building up stock. As I posted earlier in the week, final sales to domestic purchasers, a crucial measure of demand in the economy, are still showing no sign of pull-through to demand…especially in durables. Ben also damned the labour market stats with faint praise by describing them as “a little progress”, but regular Sloggers will know that the alternative interpretation – all hope lost by long-term unemployed people – is just as valid as the White House version, ‘we’re past the worst and returning to growth’.

Gold slumped, on the lack of any QE3 policy promises, by almost 3%. But the world is not done degrading its currencies just yet. Demand  for it will continue to grow, and my gold mining shares bought last September still feel like a good bet. However, if Ben the Banker doesn’t come back in with some more QE soon, I think there’s a good chance the stock markets will have a Wile E. Coyote mid-air moment: their current positions are, after all, a  complete fantasy in real economic terms. They reflect free money delivering high dividends and thus stock rises –  not underlying economic health.

Also yesterday, you’ll have spotted that The Slog’s Bankfurt Maulwurf was not in good humour – and was particularly nasty about Mario Draghi. I still have no firm steer on how much of the German banking sector he represents, but his remarks to me echo those of the German Bundesbank’s Jens Weidmann exactly. He warned of increasing risk stemming from some ECB liquidity splurges, and of course potentially increased exposure for Germany – it being by far the eurozone’s biggest creditor nation. Others both inside and outside the bank also now fear that eurobankers are becoming as addicted to LTRO as the markets were to bond purchases from the Central Bank. I have to say, I’m one of them.

Look closely at the numbers yesterday, and you’ll see that the net liquidity delivered was the highest yet. But here’s an interesting comment on the many faces of Germany: German banks gobbled up a good half of the LTRO auction. Now there’s something to disturb Herr Weidmann’s sleep patterns.

Footnote: some months ago I pointed out the rather swollen nature of India’s credit sector. Largely unnoticed, Moody’s yesterday downgraded the Bank of India. I still have concerns about this sovereign: there is a sense of bubbly instability about its growth boom. Not as bad as Turkey’s…but something to watch carefully.