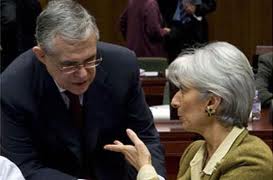 “But Lucas my dear, if you run out of poor people, you can always steal from the sick”

The illegally denied default of Greece entered a dramatic new phase this afternoon with the revelation by mainstream Greek public health website Health News that, shortly before midnight on March 8th – the eve of Greece’s psi completion on Friday March 9th – on average 70% of public utility funds in varous large, interest-bearing accounts at the Bank of Greece were raided. These included most of the State’s regional hospital budgets, various universities and (it is alleged) at least one utility company.

The shortfalls came to light late last week and this morning as various hospital purchasing cheques in particular began to bounce. The monies – estimated by one source to total some 1.4 billion euros – appear to have been used to pay off the tiny minority of private sovereign creditors who, under the original terms of their bond purchase, were entitled come what may to full payment of the bond’s yield entitlement.

Setting aside the amoral audacity of this act, it does yet again raise the issue of a Greece so utterly lacking in any real funds in the real world, that to pay off a minute proportion of the bondholders it had to resort to such a desperate measure.

“The Greek government used this money in order to purchase government bonds from various bondholders without getting permission from the bank account owners,” one reliable Athens source told The Slog in commenting on the story, “hospitals and universities have been robbed of hundreds of millions of Euros, absolutely essential for their core functionality.”

On being pointed at the Health News site, The Slog immediately contacted another of many Athens sources who have flocked to this website in recent weeks. This informant in turn offered access to a senior administrator in a major teaching hospital. The person thus contacted told me: “There can be no doubt about this. It isn’t even very subtle. All the monies were withdrawn over a brief period of time on March 8th after normal banking hours. I have spoken to teaching contacts at Universities over the weekend, and it has been confirmed that they too have the same embarrassment. These people are criminals who should be brought to justice. But in the Greece of today, it will not happen”.
One final source told me shortly before posting, “The Bank of Greece is naked in this matter. We ask them for the reasons why this has happened, and they claim to have no knowledge of such things. This is ridiculous. This could not have been done without their cooperation. There is nobody now in Greece we can trust”.
Equally, nobody should be surprised that senior politicians and government officials have conspired to do such a thing. The Venizelos elite has shown itself to be without ethics or remorse in many ways already. The European Central Bank, Brussels, the IMF and even Berlin have also shown a compliant willingness to look the other way or simply ignore the Law if it suits them so to do. But now, I think institutions around the world – and their stakeholders – need to look at what’s happening in southern Europe and ask themselves, ‘Is this really right? Is any cause worth this amount of depravity and deprivation?’
Footnote: sharp-eyed Sloggers may have noticed that last Friday – that ill-starred March 23rd – the Greeks once again postponed the time by which English Law bondholders have to participate in psi. The reason: they aren’t going to participate, and Athens does NOT have the money to pay them…as the above post demonstrates rather well.
Related: The dangerous reality behind Deutsche Bank’s apparently solid ‘front’
Other enemies of Society: Newscorp’s business hacking revealed to be global