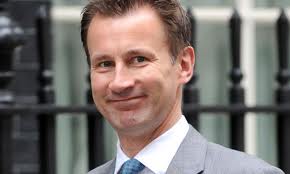 Hunt….time to grin and bare it?

Revealed: how Hunt made millions via a disguised shelf  company

The Slog has established that Jeremy Hunt’s Educational Supplies company engaged in shelf-company subterfuge during crucial dealings with The British Council (in 2002), dealings that were central to his later accumulation of wealth via his company Hotcourses. Following the revelations about tax avoidance in last week’s Daily Telegraph, these revelations must continue to put pressure on the Prime Minister to dump the Culture Secretary.

During 2002, the British Council  – a quango notorious for back-scatching policies –  used an off-the-peg company as a major supplier. The company – Sheffield Data Services – was formed in something of a hurry by Hunt’s company Hotcourses. Shortly before this, Hotcourses had produced a website for the Council. It was described last year by contemporary educational practitioners as, “A mess, a joke, a complete disaster”. At the time in 2002, it attracted an enormous amount of criticism.

Yet the Council not only continued to work with Hunt’s company: it happily paid the fees into Sheffield Data Services. More oddly still, although this was not made public at the time, Hotcourses had only a 50% shareholding in this company. Over the next seven years, the Council’s relationship with Sheffield Data Services was richly rewarding for Jeremy Hunt. (And may have been for others involved – who knows?)

The British Council further muddied the waters of this relationship by insisting that ‘Sheffield Data’s’ contract should be with ‘Education UK’. But in reality, the Council paid the cheques into SDS….which oddly enough, was based nowhere near Sheffield: it was situate in West London…..at the same address as Hotcourses. After Hotcourses lost the Council business in 2009 (spookily, just as Jeremy became a squeaky-clean Minister) SDS stopped trading. It is now the subject of an order to be struck off at Companies House. But tucked away on page 23 of the 24-page SDS 2008 company report is the news that, in that year, Hotcourses provided ‘services’ to Sheffield Data of £1.45 million. But once Jeremy Hunt joined the Shadow Cabinet, this figure suddenly became £0.00.

Waydergo, Jezzer: that must’ve been one helluva special relationship you had with The British Council.

In August of that year, Hunt’s local consituency newspaper ran a story about allegedly dodgy dealings at Hotcourses. Brazen as ever, this is what current Culture Secretary Jeremy Hunt wrote to the paper, later emblazoned on his website:

‘Your front page article on Friday 21st August suggested I was being forced to defend my involvement with the company I founded, with the implicit suggestion that there was something to be ashamed of. Nothing could be further from the truth.

I am very proud that unlike many politicians I know what it is like to set up a company from scratch with no capital. That company now employs over 200 people, all of whom use their salaries to support their families and pay taxes.’

In the light of these Slog revelations, I wonder if the Minister of State for Media, Culture and Sport would now like to explain why neither he nor the British Council have anything to be ashamed of.

Throughout seven years of working with the British Council up until his final payday in 2009, Jeremy Hunt made a great deal of money from the circuitous relationship between his company and the Council. The Council costs the taxpayer over £200m a year, but survived the Osborne axe unscathed. Imagine that.

Imagine the irritation too, of The Language Business (for a while, a Hotcourses competitor) which in 2005 asked a Freedom of Information question about the Hotcourses/BC relationship, and received a reply quoting from a BC statement that owner David Blackie describes as “entirely false”.

When in Opposition, David Cameron vowed to close down cosy quangos with special relaionships, and bring a new cleanliness into Westminster politics.

But Jeremy Hunt is still in his job, and the British Council is still there.

Earlier this week, David Cameron said he would not associate himself with anyone who carried out “aggressive tax avoidance”, while George Osborne, the Chancellor, previously said he was “shocked” by the scale of tax avoidance by some of Britain’s richest people. The Telegraph piece of last week points out that his Hotcourses tax-dodge allowed Mr Hunt to reduce his potential tax bill by more than £100,000 because it was completed just days before an announced 10 per cent rise in the tax on dividends in April 2010.

The 165 pages of emails to and from Newscorp are themselves physical evidence that the Culture Secretary lied to Parliament about full disclosure.

On his website, the Culture secretary revels in his self-description as “a cheerleader for Rupert Murdoch”. Vince Cable was moved sideways for saying the opposite.

The part-owner of Hotcourses now stands accused of being an integral part of the very tax-avoiding, close-to-the-wind business culture that both sides of the House have condemned.

But still Jeremy Hunt is in his job.

So the only question left when it comes to the Cameron, Osborne, Hunt Troika is, which one of them is the biggest hypocrite?