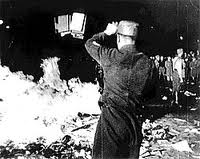 I was stretched out on the sofa at 9 pm last night, killing time until Have I Got News for You came on, when a trailer for the programme told me that it was going to be chaired by Alistair Campbell. So I went to bed. The HIGNFY panellists being funny – even at his expense – could never be enough to make me want to watch more than a few seconds of that truly horrible man.

Campbell gets a good airing from the TV media, despite his unconstitutional bullying of them during the Iraq War. Being on the ‘liberal progressive’ side, you see, he’s alright, and should be left alone. All can be forgiven if you are a good person “underneath it all”. For the same reason, I read in horror the week before as various middling-to-liberal press titles gushed in their appreciation of Tony Blair’s ‘masterclass’ at the Leveson enquiry. The bloke is a delusional, sanctimonious sociopath who has perjured himself the length and breath of every enquiry in London, and undermined the rule of Law in Britain like no Prime Minister before him.

The same was also true of Brown: but how awful we all were to suggest he was suicidally depressed and almost blind – how could we very dare to ask if he was fit to have his finger on the nuclear button?

This week, I’ve read – here at The Slog – and elsewhere – those who despise Labour defending the disgusting Jeremy Hunt, in precisely the manner they did for Murdoch, Brooks, Coulson and The Sun throughout 2010 and 2011. It beggars belief given his form as a ‘businessman’, hypocrite – and then Culture Minister – but some folks are determined to believe the man. And that is the right verb: determined.

Once upon a time, I collared the late Philip Gould about Mandelson. I didn’t know Philip well (we’d met briefly years before when we were both in entrepreneurial ad agencies) and I have never rated his strategic mind: but Lord Gould, as he became, was a decent human being who died with incredible dignity. We had the most surreal conversation about Manglesum, in that Gould kept telling me how only ‘focused propagandists’ like Mandy “are ever going to get the Tories out”….by which, I suggested, he meant ‘pathologically ruthless liars’.

I’m not puzzled by the infinite ability of partisan citizens to turn a blind eye, because that’s exactly what it is: pretending not to notice that one is dealing with a turd, on the entirely spurious grounds that the smelly jobby “is a damned sight preferable to the other lot”. Is that as high as our ambitions for political quality go? Well, yes – I suppose it is these days, actually.

Boris Johnson is another case in point. A womanising, puffed-up bully with a furious temper (and a foul mouth to go with it) when crossed, he is lauded by the Tory Right as their potential saviour. While his opponent in last month’s London Mayoral election, Ken Livingdead, is another darling of the Left: a putschist, Stalinist, mealy-mouthed turncoat who championed the IRA and encouraged Islamism before he became Mayor…and then went straight for the patriot vote after the London bombings in 2005.

And that George Galloway, eh – isn’t he a lovable scamp? No actually, the bloke is a nasty piece of work with a far from explicable past in relation to Libya – an extremist who manipulates British Islamism for his own ends. And right at the top there’s Dave – much misunderstood, such a nice chap when you meet him, heart’s in the right place and all that. Bollocks: he is a privilege freak with a serial penchant for amoral buddying.

I’ll stop now before a political gargoyle somewhere talks to a website executive gargoyle somewhere else about my ‘hate blogging’. The point should anyway be clear by now: I am not remotely interested in shamelessly defending the shamefully indefensible, just because the rat-fink concerned “is one of us”. That way lies hoping that Hitler will obliterate Stalin, or voting for Obama cos ‘e is black.

These are real historical parallels, not hysterical ones. Without a German bourgeois loathing for Communism, Adolf Hitler would never have made it to the German Chancellery, and the Falangists would not have triumphed in 1930s Spain. The toleration of a necessary evil is every bit as bad as Brecht’s happiness with the Good Lie of Szechuan. If your holistic belief system is sound in the first place, then evil is never necessary: it is merely another version of the ends justifying the means.

What I’m really writing about here is the subject I touched on last week: politics going well beyond the robust partisan, and on into divisive hatred.

There was a good example last Thursday when two Leftwing chaps got into a spat on Twitter with Dan Hannan, and (unusually for him) he replied in kind. Sarcastic putdowns of poor logic are the meat and drink of healthy politics, but personal savagery should be restricted to the lost souls against whom I was fulminating several paragraphs ago. And every time one indulges in it, further self-inquiry should ask whether it is really called for: some of the bile splattered over Ted Heath’s reputation in recent years has been pretty awful, but then hardline Thatcherite robots are no better than Left Labour’s spitting adders. Ted was a naive old Queen, but his aims were often admirable.

That the syndrome is on the increase in Britain is hard to deny, and although most of it used to be in the ‘new’ viral media, it is creeping into the old school more and more. The Sun has always been ineluctably nasty about The Other Lot, and the Dacre Mail is unspeakable in its appeal to the knuckle-draggers, but the Telegraph is getting Icepickitis as well nowadays, The Mirror’s political stuff is increasingly class-warrior drivel, and The Times reads more like the thinking man’s Sun with every week.

It happens for all kinds of reasons: unelected, non-dom, twisted proprietors, polemic fascism, ignorance, too much right-brain egomania….but above all, in my view, because of a lack of respect for the other side of the argument.

In turn, there are two reasons for that. First, those offering up that argument in contemporary politics are frequently undeserving of respect – Andrew Lansley being a good example; and second, those opposing it most vociferously wouldn’t respect Lansley if he was Albert Einstein – Dr Eoin Clarke, for all his many excellent instincts, is in turn a good personification of that.

If you’re a bigot faced with idiots opposing you, mutual respect is impossible. Without mutual respect, there can be no genuine democracy.

Hating the other lot often means loving a bad lot. With the British Communist Party, hatred of the 1930s National Government led to inexcusable support for all things Soviet, from the Nazi Pact in 1939 to Hungary in 1956, Czechoslovakia in 1968, and beyond. If we aren’t careful, hatred of anyone suggesting a Third Way* for the NHS could lead to Prime Minister Johnson championing a rapacious US-style insurance system; and hatred of all things Labour may just as easily result in Prime Minister Harman offering affirmative feminist action as the answer to systemic fiscal meltdown.

* By this I mean a mutualised solution.

If you found this piece interesting, you will probably also like Keeping money out of politics