Being matter of fact about distorting matters of fact 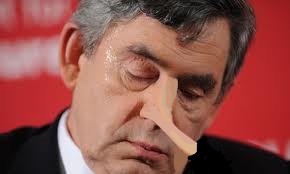 While the following comment might seem a completely random start to this piece, it’s highly relevant to the point. This morning on BBCNews, I listened as a morally and logically challenged Conservative lady MP told the interviewer, when asked about the LibDems abstaining on the Jeremy Hunt vote, “Well, if Vince Cable hadn’t been so irresponsible in the first place in expressing his feelings about Mr Murdoch, Jeremy Hunt wouldn’t be in the situation he’s in now”.

Where to start on the process of deconstructing such an air-headed, ruthlessly stupid, morally invalid comment like that? When did the British people first start voting for Wombat Woman just because, underneath her name on the ballot paper, it said ‘Conservative’?

And that does segue right into Leveson; because what this enquiry has been – pretty much since Day One really – is a steady stream of almost completely repugnant people; a foul torrent of lowlife daring to insult the British public with blatantly untrue, vapid and amnesiac evidence which, taken as a whole,  has not suggested the lack of a moral compass at all. On the contrary, it has suggested that the vast majority of the political class and Fourth Estate owns a highly-tuned digital compass pointing in one direction only: going West to the maintenance of either power – or what they fancifully imagine is still their ‘special’ reputation – via a process of systematic lying.

I say fancifully, but having heard the self-consciously slow and deliberate Gordon Brown perjure himself at least seven times during his evidence on Monday, I was staggered to find the Left – even the intelligent Left – tweeting about what a fine man he is afterwards. Even the BBC (so often accused of being Liberal-Left biased, which it is) broadcast an extended conversation between its political reporter and the studio anchor, in which the lobby correspondent spake thus:

“When Brown said Charlie Whelan had only ever acted properly through civil servants – and never to his knowledge in a way designed to smear the innocent – there were gasps of disbelief from every political correspondent in the room. That he could so obviously mislead on such a question effectively made it immensely difficult for those attending to take other parts of his evidence seriously”.

That is by far the most damning summary I’ve ever heard from a BBC correspondent on a recent Prime Minister, but then Brown has always been and always will be a pathological liar….and the comment was entirely correct. Like a methodical hitman using a silencer on his fibber-gun, Our Greatest Ever Chancellor spoke calmly – and with a masterful show of feigned dignity – as he sat before the enquiry and quietly fabricated his entire recent past. Only one man can better him at this culture-f**king game, and that man is Tony Blair.

But his evidence was no different to that of Rupert Murdoch (“I have never knowingly used my newspapers to further my business interests”) Jeremy Hunt (“I never behaved in any improper manner at all throughout my management of the bid process”)  or Rebekah Brooks (“I really wish I had my diaries with me, I really do”). They make Slick Willy Clinton (who didn’t inhale or have sexual intercourse while stimulating an aide’s genitals with a marijuana cigar) seem a paragon of plain speaking and unimpeachable honesty by comparison. Dick Nixon? He must be due for sanctification soon, surely. His secretary Rose-Marie Woods no doubt sits at the right hand of God in Heaven.

A truly unfortunate thing for all Britons tonight is that the one man Brooks, Hunt, Murdoch – and a hundred other dissemblers – all have in common as a willing colleague is the Prime Minister David Cameron. He lied about his real feelings on the European Union, he lied about the closeness of his social relationship with Brooks, he lied about his plans for the NHS, he lied about his intention to do away with all spin if elected Prime Minister. And soon enough, Mr Cameron will be giving his ‘evidence’ to the Leveson Enquiry. Never in the field of human endeavour was on Holy Bible so horribly abused by so many.

The Leveson Enquiry is now so devalued by perpetual perjury, I hereby offer – to anyone willing to run with it – a new collective noun for mendacity: a leveson of lies.

This week, the Sun (owned by Rupert Murdoch, the man who never ever wields economic and political power through his newspapers) broke a story suggesting that David and Samantha Cameron were parents on a par with the worst of the Underclass. The Left – ever willing to present itself as the decisive voice of morality in our society – has been making hay with this on Twitter, even though it knows (1) the story is in and of itself a classic example of press standards in the sewer and (2) it has been in invented for purely vengeful for reasons by the man the Left sets up as Satan on Earth.

For the record, Cameron was travelling with heavy security cover to and from his local pub in two vehicles. For obvious security reasons, he and his wife were in separate cars. In the scurry of fear that so often accompanies our politicians these days (whyever might that be?) his small daughter was forgotten for all of eight minutes…because she’d gone without notice to the loo. In the light of this, I read a comment in the Daily Telegraph (oh how the Sarkistas hate Camerlot) by some Social Working gargoyle to the effect of it being a signal failure of social services that the unfortunate Cameron offspring was not being held by now in a den of controlling, all-too-often paedophile carers. The likes of Tom Watson would doubtless applaud such a thing…but have nothing to say on the equally obvious tissue of lies that emanated from Piers Morgan’s privately educated mouth earlier in the enquiry…because he once worked for the Labour-supporting celebrity turd-factory Trinity Mirror.

I wonder, how might one equal the aggregate of highly concentrated, criss-cross quizz hypocrisy in those two preceding paragraphs? Well….by looking round the world, unfortunately.

So then, moving abroad (in every sense) the European Commission is a leveson of lies; so too is Wall Street, the Federal Reserve, Putin’s Russia, China under the squabbling Beijing control freaks, the Australian government graced by Wayne Swan, Berlin beneath the Merkeschäubles, and the Obama-supporting Huffington Post  – which bans genuine criticism of its sharp-suited (but clay-footed) Black Dude hero, and whose original proprietor netted $34m by not paying all those talented young journalists who wrote her way to riches.

So here we are at full circle: press standards dragged through the slime by press proprietors, senior politicians taking it up the backside from those proprietors, and almost all of them lying about each other afterwards. I guess one might call this ‘tabloid kiss and tell’. And yet, even that doesn’t anywhere near capture it. ‘No honour among thieves’ gets closer. But ‘sink of iniquity’ pretty well nails it. And if I may repeat once more – despite the odd cynical comment thread about my real commitment to this – politics is no longer about choice, because there is nothing to choose between red, orange or blue: each as a group is a veritable (ho-ho) leveson of liars.

The country I love is getting more like Greece every day. This is to be rude about the Greek elite, not the Greeks I’ve always found resourceful, funny, and honourable to those they respect. I am in another country I like at the moment. It’s not the one I love, but the one I love isn’t any more either. Discuss.

Apologies if you find this piece unpleasant in relation to Mr Hunt. For full details of why, go here.