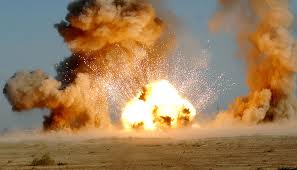 WHO WILL LIGHT THE BLUE TOUCHPAPER?

A close examination of the FSA rationale for fining Barclays points – along with other established facts – towards bank rate fixing that goes way beyond both Britain and Barclays. In fact, the connections apparent across the piece of this rapidly developing scandal suggest that nobody ‘saved the banking system’ in 2008: key players intimately involved in the sector simply lied about the cost of borrowing….using a fraud both well-established and near universal by then.

By becoming embroiled in a fruitless search for who said what to whom and when, the MSM have I think missed two vital points from the written rationale behind the FSA fining Barclays a total of £290m. In my view, enquiries and seclect committees and all the rest of the Establishment’s delaying tactics are pointless, because it’s brutally obvious that almost every witness (and half the examiners) employ practices they wish to either play down or hide.

Above all, the FSA document suggests a degree of coordinated action very damaging to the British political class; and it suggests very strongly that a large number of banks across all continents must be involved.

Barclays acted inappropriately and breached Principle 5 on numerous occasions
between January 2005 and July 2008 by making US dollar LIBOR and EURIBOR
submissions which took into account requests made by its interest rate derivatives
traders. At times these included requests made on behalf of
derivatives traders at other banks. The Derivatives Traders were motivated by profit
and sought to benefit Barclays’ trading positions.

This is an explosive paragraph, because it establishes (1) the manipulation was at least three years old before 2008 (2) It was not just Libor but also Euribor that we see involved here and (3) the derivative trader sector beyond Barclays was well aware of the scam, and used it regularly to create (or recover from) positions taken.

In this initial period – when the world was in a new paradigm and did not need saving – borrowing rates were lied about up and down to get kickbacks from/do favours for derivatives traders inside and outside the bank. Essentially, the parallel is that of punters at one roulette wheel persuading a gambling house to weight another wheel so they can get their money back.

This was in a market worth $554trillion in 2011, so you can imagine the sums involved. The sums are in dollars, and the fixes apply to both UK and European rates. It is therefore very hard to imagine that the Central Banks had no idea the practice was going on. Plus we also know that, once this profit-fraud became a save-the-world gambit, Swiss outfit FTC sued 16 banks on four continents about libor rate fixing in 2007/8.

Think about this applying commonsense logic. Over any given trading period, all the banks are chopping and changing staff regularly between each other. It is inconceivable that Barclays is the only villain between 2005-8…any more than Newscorp was the only phone-hacker after 1998: what we’re seeing is a widespread, nudge-nudge blind-eye practice taking place across the piece.

Now put yourself in the position of being a senior Minister conversant with the banking system (for example, Gordon Brown), a senior Treasury mandarin of even more ability, and the Governor of the Bank of England. Or Hank Paulson at the Fed and Jean-Claude Trichet at the ECB. One thing all these men freely accept is that, during late 2007, they began to see the global banking system’s liquidity drying up….the result of mutual distrust, fear and rumours about competitor solvency. These guys are having G20 summits and attending the same banking seminars all the time. But they never talk about rate fixing?

Alright then, let’s be kind and assume that they’re all spotlessly clean on this issue. However, in late 2007 Deputy BoE Governor Paul Tucker makes a call to Robert E. Diamond, the man in charge at Barcap. This is significant in itself because, no matter who you believe, they can at least agree upon the subject spoken about: Barclay’s declared Libor rates being well on the high side compared to most other banks.

The FSA document takes up the story:

Liquidity issues were a particular focus for Barclays and other banks during the
financial crisis, and banks’ LIBOR submissions were seen by some commentators as
a measure of their ability to raise funds. Barclays was identified in the media as
having higher LIBOR submissions than other contributing banks at the outset of the
financial crisis. Barclays believed that other banks were making LIBOR
submissions that were too low and did not reflect market conditions.

Now this is key. Having moved on from cheating the public to hoodwinking the media, Barclays staff are already lying ‘downwards’ about the borrowing rates in order to ensure there is no whiff of liquidity problems at the bank. Now they find that at least 11 other banks are lying even more. Tucker has done no more than observe that Barclays Libor submissions seem ‘on the high side’. Two questions:

i. Why does he seem worried about that in the first place? Because he is AWARE of the impending danger of bank-panic.

ii. Why does he imagine Diamond can do something about it? Because he knows that the banks have been fiddling the rates for years.

I have no doubt at all that, in his evidence to the TSC tomorrow, Tucker will say “I merely rang to receive Diamond’s assurance that the bank was OK”. Rubbish. Tucker knows that, of all the banks, Barclays is the most independent, and the most scathing about the ideas of both regulation and potential nationalisation. What does he expect Bob to do, tell him the truth?

Anyway, Diamond now goes to his 2ic Jerry del Missier and somehow this guy manages to mishear his boss saying that they need to cheat even more on Libor. He doesn’t ask Bob to repeat the order, and in the ensuing four years of working closely together, only a few weeks ago does he realise that Diamond said ”try more” or “buy more” or “my boar”, as opposed to Libor. This is obviously total bollocks, but is not germaine to the point here: the fact is that del Missier trots off to ‘lie more’…such that – miraculously – all the Libor contributing banks have almost exactly the same rate…and thus not too long afterwards, FTC gets miffed about its client forecasts being wrong, and takes the pretty damn big step of suing the global banking giants.

It’s unlikely bordering on impossible that this synchronised fraud is done purely between the banks with no other parties being involved.

Here’s why, in plain English: only a mad senior banking executive would make the first phone-call. A request to illegally fix the rates low would be seen immediately by the other sharks as clear evidence of a drowning prey. This is why Libor’s secrecy and discretion via the BBA exists in the first place.

The only way such coordination could’ve been achieved is via central banks. And again, the same rule applies as above to the idea of a bank approaching the Central Bank: that marks you down as a Northern Rock who has reached the desperate stage of implosion. Far more likely is that the key CBs and their grovelling politicos initiated the idea: “we must all stick together or hang together”.

I have two sources – very senior sources – one in an investment bank and one a former Treasury official – who are not only clear about the fact that there was widespread talk of Libor fixing to save the banks: they are very clear that Gordon Brown for one was yelling at various bank CEOs on a regular basis during this period. He obviously believed that they weren’t going to recoil in horror at the idea.

And one can apply that same principle to the Paulsons, Kings, Tuckers and Trichets of this world: is anyone in such a position of senior probity likely to risk his neck by openly suggesting the banks lie about one of the most revered institutions in the financial sector…if he suspects they’ve never done such a thing before?

While so far I have focused on both the global and conspiratorial nature of the Libor rigging practice, there is also a final factor that spells potential disaster for the Conservative Party in particular. Neither Cameron nor Osborne were in office at the time, but a staggering number of the Party’s senior players, donors and facilitators have been deeply involved in Libor credit broking for years. The brokerage sector is the most potentially dangerous wire in this UXB.

If you were going to try an save the banking system by under-reporting Libor rates, would you bring the key brokers onside, or leave it to chance? Suppose one of the more honest brokers decides a fix is in, and rings up the FSA. No, it’s far too leaky: you have to get them inside the tent as well. In fact, if you coordinate the fix THROUGH the brokers, everyone wins: the FSA is pretty useless about libor broking; doing so is far more discreet than banks informing the BoE and Treasury direct; three big bananas control the whole sector – so it’seven less likely to leak; AND most of the political class are in it up to their necks.

I think it highly unlikely that the fix was put in during 2007-8 without getting the brokers onside. The biggest players there are ICAP and Tullet Prebon…inside those companies right at the top are megadonor Michael Spencer, Deputy Tory Chairman Michael Fallon, and Tory supporter Terry Smith, the Tullets CEO.

Farfetched conspiracy bollocks? Look at the Torygraph piece from Thursday about why Brown really sold the UK’s gold at a low price. The then Chancellor did it to help the banks, who had made bad bets on gold: he therefore publicly and with notice dumped an enormous heap of gold to get the price down. This is EXACTLY THE SAME as Barclays helping derivative chums to get their money back on bad bets by massaging the Libor up and down.

The whole idea that ‘the markets must decide’ has always been drivel. It is being shown up increasingly, however, as cant: the stock markets have been rigged and propped up by QE, the Gold market has witnessed secret sales and Fed dumping for years, and now the Libor rate is revealed as a way to screw bank customers by those in search of illegal riches, to retrieve hopeless bet positions by fraud, and then save the brass necks of investment bankers who have already been bailed out by obscene injections of public money.

Nobody believed a word Bob Diamond said in testimony last Wednesday, but he is not the issue. He is gone from the scene – and for The Slog, that’s a major result. Paul Tucker is one level of conspiracy higher, and I don’t expect to find his evidence tomorrow to be either truthful, or credibly explanatory. Just as with Hackgate, the closer we get to the epicentre of this vortex of villainy, the dafter the raionales, denials and memory failures are going to get. We should not make the same mistake as we did with Hackgate: we should launch a multinational and powerful criminal investigation, and start getting some gargoyles in the dock. Otherwise, the usual ‘enquiry as filibuster’ outcomes will apply.

Related: Why I’m all Enquiried out