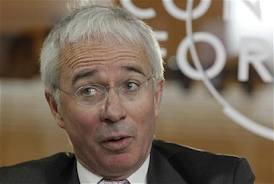 “300 transactions totalling some $15million made with Iranian clients between 2001 and 2007 breached US sanctions.This is clearly wrong and we are sorry these mistakes occurred but we did not make any attempt to overturn sanctions.”

If you’re even remotely interested in banking and finance, you will have heard by now that Standard Chartered has ‘negotiated’ a whopping $340m ‘civil’ malfeasance fine with the office of New York regulator Benjamin Lawsky.

But it’s quite hard to find much coverage pointing out one simple change in SCB’s position going into the session: that the sanctions-busting naughty deals involved only $14m. Nevertheless, right at the end of the post-deal joint press release from New York State Department of Financial Services (DFS) and Standard Chartered Bank sits this single sentence:

“The parties have agreed that the conduct at issue involved transactions of at least $250bn.”

Most people are bored by maths, so I’ll keep it simple: that makes the degree of fraud 17,000 times bigger than SCB claimed. Lawsky’s charge has prevailed, and Standard Chartered are guilty as charged. They have coughed up a fine of one third of a billion dollars for fraud that amounted to a quarter of a trillion dollars. Either Peter Sands lied, or he was misled. Whichever is true, I’d expect him now to resign, but not expecting it really…if you see what I mean.

Shortly after the charges were made public, this is what The Man Who Would be Prime Minister told the media:

“You can’t help wondering whether all this beating up of British banks and bankers is starting to shade into protectionism; and you can’t help thinking it might actually be at least partly motivated by jealousy of London’s financial sector – a simple desire to knock a rival centre.”

After first Johnson and then Bank of England Governor Mervyn King leapt to SCB’c defence, a backlash against the allegations spread to the City where investors rallied behind the bank, adding £3bn to its value.  Kerr-ching, fine paid for, Ithangyoo.

Campaigning Labour MP John Mann, who follows a similar line on the prosecution of the guilty, has also been made to look silly. But surely we should expect the man in charge of Britain’s finances to be discreet? Well, we should – but we can’t. George Osborne jumped on the Yank-bashing bandwagon, making three calls to the US Fed Secretary Tim Geithner, during which he demanded “fair treatment of British businesses” by US regulators, and vigorously pointing out that he was “very concerned about the way in which New York’s Benjamin Lawsky had sprung his explosive order on Monday.”

Quite so, George: you’re very concerned that Ben Lawsky gave Peter Sands no time to dissemble, and thus caught him at it….because that now makes it even more difficult to keep drivelling on about how “we must stop bashing the banks”.

Boris, of course, deplores bank bashing. He also wrote off Hackgate as “obvious Left Wing piffle” two years ago, and last week invited Rupert Murdoch to be his personal guest at the Olympic Games.

But Boris Johnson is being pushed – and pushed very hard indeed, more than most folks realise – by unelected media barons and slightly odd backbench groups as our Prime Minister in waiting. He doesn’t have a single qualification for the job; but he does have some unpleasant traits that could make him very dangerous indeed once elected.

Of course, Ed Miliband was propelled into a leadership he doesn’t deserve by the UNITE Union, and the unelectable Harriet Harman. Of course, Nick Clegg and Lod Mandelson used EU allies to add weight to their influence upon the UK’s business and foreign policy.

My point is this simple, regardless of political affiliation: nowhere in this list of influences upon our politicians is a group called ‘the Citizens’. And therein lies a sizeable chunk of Britain’s problem. Yes, I’ve written that before. But it deserves repetition.

See also How the Olympic boost morphed into a cost