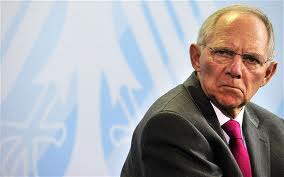 Sources in Berlin and Paris were making it clear last night that, whatever emerges from the Merkel/Samaras meeting in the German capital tomorrow, a deal is already on the table. The task of Antonis Samaras is to prove he is willing to honour that deal – in every sense of the word – not to do the impossible being requested in public by German politicians.

Eleven days ago, The Slog posted that relations between Greece and the Troika had relaxed because, as a high-level Athenian source alleged:

“Something has been agreed, and whatever it is has made the bondholders and the Troika irrelevant overnight. There are half-hearted references to repayment schedules, but they don’t have that sense of panic evident just a few short weeks ago. But you can see that Samaras is now pushing for more austerity progress.”

The piece continued: ‘A deal has been done to pay off bondholders and forgive the residue of the debt…Somebody, somewhere in Europe flicked a switch within the last ten days, and everyone relaxed….Brussels or Berlin…or both…or others…have given Samaras a big reassurance that if he sticks with the [austerity] programme, Greece will not be thrown out of the euro. Those same people have given similar assurances to the key players in the IMF and bondholder groups…that if they take another haircut, the EU will pay off the balance and give them their money back…It is becoming increasingly potty to stick with the view that nothing is going on here.’

Trusted sources have stuck with that view, and seemed more certain last night than the week before last. And now leaks are beginning to appear in the influential MSM titles around the globe: said Bloomberg late last night (BST), ‘…officials look for ways to stave off an immediate crisis…[including]….front- loading aid payments to Greece to help it over liquidity hurdles; lowering the interest rate or extending maturities on loans; and pushing for a second debt writedown, this time focusing on bonds held by public institutions, notably the European Central Bank…’

Further, while Jean-Claude Juncker sprayed out some more bombast yesterday –  telling the Greeks they have a “last chance” to avert bankruptcy – German officials specifically were briefing to the effect that if Greece wants more time, it “could receive concessions if it demonstrates a desire to achieve its main bailout goals”.

And of course, Herr Miserable Schäuble got himself a world media splash yesterday by saying ‘more time’ wouldn’t solve Greece’s crisis. (As always with Wolfie, he didn’t elucidate what would.) But the truth is – as The Slog has contended for some time – that the EU economy couldn’t stand a mess right now, and Greece’s geopolitical hand is too strong to risk chucking Athens out of the eurozone. This focus too is reflected on the front pages of French and German MSM titles today: most German newspapers are concerned with the German economy (still growing) and investment in education. In  turn, key analyst group Markit announced today that “…the July and August readings would historically be consistent with [eurozone] GDP falling by around 0.5%-0.6% quarter-on-quarter.” In the French press, there’s been a  concerted campaign against Francois Hollande over the last few days from both Left and Right: ‘Where are the promises?’ ‘Government under fire’ and ‘100 days of doing nothing’. Not a peep about any ‘eurozone crisis’.

OK: the unvarnished truth was given to The Slog on 13th August as ‘pay off bondholders and forgive the residue of the debt’. What is being floated in the financial press right now is ‘front- loading aid payments to Greece to help it over liquidity hurdles; lowering the interest rate or extending maturities on loans; and pushing for a second debt writedown‘. Ignore the words and extract the kernel of reality:

1. Front-loaded aid = cash = available immediately to pay off debt…plus further help from reduced rates. If this isn’t debt forgiveness, then the Pope is a Muslim.

3. A second debt writedown = haircut = main creditor is the ECB. ECB forgives the debt, and prints some more euros to pay itself back. See also this conclusion from my original posting: ‘I don’t know for certain: but logic points the finger at Mario Draghi.’ Well of course it would: Signor Dragi can, should he wish, do pretty well anything he wants…and he has.

Except for on small  problem: even after all this has been agreed in a last-minute cliffhanger, Greece is still going to need Bailout III before too long.

At which point, Athens will get The Spanish Deal: a full bailout, called something else.

But when that happens, will the Germans still be in there and fighting? I continue to have my doubts.