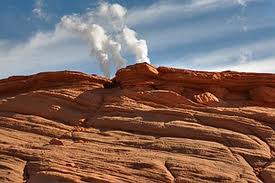 No smoke without fire. Following a Slogger alerting me to the subject, I understand from nuclear expert sources that that what the BBC wrote off as ‘extreme weather conditions’ at the UK’s Sellafield plant may well have been rather more. Sellafield Ltd said a shutdown, which came as snow and high winds affected the county, was ‘to allow staff to leave early and get home safely.’ The incident occurred, it seems, some time in the last five days.

This doesn’t entirely explain why several workers were asked to wear gas masks and protective clothing. More protesting from Sellafield Ltd followed: “There is no reason to believe that there will be any off-site nuclear, environmental or conventional safety issues associated with the incident. The priority for the team is to protect our workforce, the community and the environment.” It said the shutdown was nothing to do with the work at the site and there were no safety issues. A spokesman Karl added: “This is purely a safety issue because of the high winds and snow…we want our 8,500 workers to go early and get home safely.” Without their noses lighting up and so forth.

I have obtained graphs from four Irish airports, all of which show an airborne radiation blip shortly after the incident. In fact, some graphs supplied to me by an offshore source suggest, as he puts it, “Clouds of radon are hitting the monitors randomly, but the timing of the hits is most relevant here I believe. The low level wind chart shows the wind blowing to the north west, and it is possible some has moved down the channel as the east coast of Ireland shows a higher reading on the coastal monitoring stations. But the whole of Ireland looks like it is getting a hit. The winds taking the main plume out to the Atlantic are likely to bring this contamination back to either Ireland or even the UK as there is a moving LOW pressure zone west of Ireland.”

Might be something to keep an eye on, this little harmless incident.

Cawkwell’s dart. Many of you will have seen the story about the dating site Cupid’s dramatic fall in value. It lost 60% on the London stock exchange last Friday, following allegations of wrongdoing in the press. Some in the City, however, are more concerned about the way in which the company is being ruthlessly shorted, possibly after some insider trader – perhaps even misinformed insider trading – had the company on its knees by the weekend. Says one source, “The shorters are trying to make a killing.  Simon Cawkwell is one. He is shorting the company and really hammering it on [forums]. He has done this alot on several companies  and I really think his hypocrisy is staggering – and his use of these forums just for his own self interest.”

I wonder, shouldn’t somebody be policing these forums rather more carefully on the basis of ‘directionalising’ for one’s own benefit?

Injustice and insecurity. Are enough people following the shabby tale of The Justice and Security Bill which, if it becomes law, will enable judicial trials to be held in secret……with the usual draconian gagging orders against anyone who blows the whistle about them.

The bill has now gone through all stages in the House of Commons, and will go to the House of Lords for consideration. It’s well on the way to becoming law…..and some of its clauses are too horrendous to contemplate if you have a sensible (as opposed to mad) grasp of citizen liberties. The bill can be judged in more detail at http://services.parliament.uk/bills/2012-13/justiceandsecurity.html.

It was sponsored in the Commons by none other than Justice Minister Kenneth Clarke, whose ministerial title, I assume, is meant to be vaguely ironic. Personally, I find it hugely funny.

Earlier at The Slog: Bernanke shifty on the subject of looting bank deposit funds