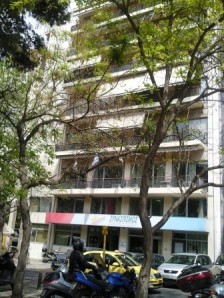 One building (left) not as yet for sale in central Athens is that of the left-wing Party led by Alexis Tsipras, Syriza. But across from that square and two blocks down, the People’s Republic of China has bought a building that was once a major department store.

“The Chinese already own half of Piraeus, and they are trying to buy the rest of it,” said a Greek businessman as we drove together Friday night to a restaurant in the outer southern suburbs of Athens.

“Over there – not far from the Syriza building – is an old warehouse bought by the Chinese,” another source told me as we walked about in the warmth of an Athenian early afternoon, “They have four floors in the building blocked off. Nobody knows what happens in there”.

Today, in April 2013, everything in Greece is for sale. Two days ago a small girl – aged no more than ten I would estimate – came up to me, playing her violin in a main market  thoroughfare close to the Acropolis. She wasn’t much of a violinist, but after finishing the piece, she said something to me…and of course, I didn’t understand. A man watching nearby, resigned of expression, said “She is saying she costs very little for your pleasure”.

I gave the kid a small coin and asked the bloke if this was commonplace. “Not common,” he replied, “but not rare either. These bastards will reduce us to an animal state”. I wanted to ask him more, but he waved me away. I don’t blame him; imagine how I’d feel in my own country, being asked by a passing Swede if all English prepubescent kids now whored on the streets.

In a Telegraph piece posted last night from Rhodes by Harriet Alexander, she notes that a Mr George Georgas told her, “We are like a bankrupt housewife forced to sell the silver, to save the family,” he said. “Greece has no choice.” On the island of Rhodes, the 1,850-hectare Afandou estate, on the peninsula of Prasonisi – a paradise for windsurfers – is up for grabs…and grab (as in land) is the operative word.

Antonis Samaras the Greek Prime Minister knows only too well that flogging off bits of Greece is vital in order for his country to get the lifeline monies from the Troika. These monies, of course, zoom from an escrow account straight into the copious pockets of various lending institutions anything up to 9000 miles from Athens. The Greek people – his electorate – are left manage on their own. The ‘Government’ headed by Samaras offers them less and less help while demanding more and more of their money.

The mass of Greek people had little or nothing to do with the debts run up by a political élite at first naively keen to take advantage of cheap ECB loans…and then  desperately cunning in the use of Goldman Sachs to help disguise their maxed-out credit cards. Yet the population must stand by and watch Greece become some kind of 19th century African country. In March, the Emir of Qatar bought six Greek islands for £7 million, while a Russian oligarch bought Skorpios – previously owned by the Onassis family – earlier this month for a reported £65 million. It was – wait for it – a present for his 24-year-old daughter Ekaterina Rybolovlev. Meanwhile, a 10 year old girl is for sale in Athens for – what? – five euros?

There are many who, on reading this post, will fall back on weasel excuses about idleness and the need to repay and the appalling consequences of tax evasion. But such observations consistently fail to recognise that 90% of that evasion comes from the 3% Greek élite, 99% of whom in turn are the very people now yelling from the rooftops about the iniquity of voting for Syriza. (And I am bound to record that, very probably, 90% of them in turn live in the smarter suburbs of Athens).

We will never, ever escape from wealth inequity, because we cannot resist the species wiring that insists on a power hierarchy. There is nothing at all wrong with a power hierarchy: the mistake we’ve made is to insist that money should be the currency of that hierarchy. Money is a Golden Calf – a false god. The real unit of power should be accountable leadership: that is to say, the willingness to be unpopular in the short term…and yet judged on the foresight of decisions taken.

Such is the basis upon which – allegedly – several monarchs became legends of history. Suleiman I, also known as Suleiman the Magnificent, reigned as Sultan of the Ottoman Empire for 69 years in the 15th and 16th centuries. Suleiman not only extended the influence of his benign empire: he also reformed education, taxation and the criminal justice system.

From January 16, 27 BC until August 19, AD 14  – a period of 41 years – Augustus Caesar ruled Rome. He improved the infrastructure and military of Rome, and reformed the taxation process. His reign was known as Roman Peace, because during his reign diplomacy flourished.

Cyrus II ruled Persia for nearly 30 years until 530 BC. During his reign, the Persian Empire encompassed much of the Middle East, including Iran, Israel and Mesopotamia. But at the same time, human rights and military strategy were greatly improved.

It is very hard to read about such people (most of whom had a life expectancy of no more than 45-50 years) and then observe the posturing of Antonis Samaras, listen to the evasive drivel of Evangelos Venizelos, or read about Golden Dawn yobs making a mockery of the Parliamentary process here. The politicians sell out, and so now the Greeks must sell up.

I have watched Alexis Tsipras over several months. For a Leftist, I found him inclusive, politically savvy, and media smart. But even if his Party building isn’t for sale, it is beginning to look like Tsipras himself might well be. He began talking to the Americans some time ago, then he visited the States. Now he is on TV all the time: the more exposure he gets, the more he dodges direct questions. Keen not to appear part of a lunatic fringe, the Syriza leader accepts the euro as “a given”, although in this sense he is out of touch with entrepreneurial Greek business – for whom it is a necessary evil they hope will implode in on itself, thus freeing them from the clutches of Berlin-am-Brussels.

If my sources are typical, then Alexis Tsipras is already seen by the US State Department as the coming man: they see him as their Muslim Brotherhood in Greece. I suspect the truth is that Tsipras is a man who will lose middle class support if conditions here improve, and is already leaking support further down the social scale as he backs away from EU and geopolitical confrontation

Everything and everyone in Greece, it seems, is for sale. Except the struggling Greek citizens themselves.

Yesterday at The Slog: Athens may be in slavery, but it isn’t in chaos