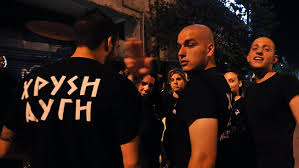 Golden Dawn….yobs, but in this case, victims

The weird thing about aiming to tell the truth is that you can end up defending some truly awful people. But just as not all disabled people are paragons of virtue, so too not all gargoyles are guilty or ghastly all the time. Hitler, for example, was unfailingly polite to women and always stood up when they came into his presence. His military service in the First World War was exemplary when it came to courage. Having fathered a child by a French woman during a leave from action, after the War and throughout his career he both protected and subsidised the pair.

Golden Dawn members, in my view, tend to wear out carpets very quickly on account of the knuckle marks they leave when perambulating. But as C P Snow remarked, “Facts are sacred”. Today I have been sent some poll data that very clearly point the fickle finger of guilt at Antonikis Samaras in the matter of the State neutering of Golden Dawn. I doubt very much if you will see this evidence in the Guardian, but either way it remains prima facie evidence and thus worth examining.

Regular Sloggers will recall that the prevailing view in Greece (whatever the Party affiliation) is that the ruling Samaras Coalition cracked down on Golden Dawn in order to reduce the split among Greek right-wing voters. It is also the overwhelming view of most journalists and the intelligentsia that what pushed the Government into this foolhardy action was growing evidence from its own polls about the left-wing Syriza’s rise and a Golden Dawn surge in popularity.

The data I’ve been given confirms this view unequivocally. Alexis Tsipras’s Syriza Party of the Left is shown to be ahead of Samaras’s New Democracy by 6-8% nationwide. And (prior to the murder) Golden Dawn weighs in at just under 18% – only 2-3% below ND. In popular vote terms, the poll also suggested a significant percentage for other anti-Troika Parties.

In short, in any future General Election the Left would cruise to power under Alexis Tsipras. As even pea-brained Antonikis could work out that an attack on Syriza would evoke Civil War, the stitching up of Golden Dawn’s Nazi hordes seemed something of a no-brainer.

I must add a penultimate comment on this freak-show. If Samaras really believed all the 2014 recovery bollocks was true – and given that he isn’t facing an imminent election – why would he bother to employ such a risky strategy against his opponents? Surely if he thought economic winds were about to fill his sails, he would simple sit tight and wait for the sea change? This is, I think, a telling question to which the answer is pretty obvious.

And finally, my favourite Grecian interpreter points out that referring to ‘Little Antonis’ Samaras as ‘Antoniki’ is genitively incorrect. Whereas I was trying to suggest that the Greek Prime Minister has a miniscule penis, by saying Atoniki I appear to be suggesting that he might be some kind of transexual or cross-dresser. As I have no desire to make such a scurrilous suggestion, I shall therefore henceforth use the correct genitive case, ‘Antonikis. Mr Samaras may well have a penis of even smaller mass than his brain, but Eddie Izzard he very clearly isn’t.