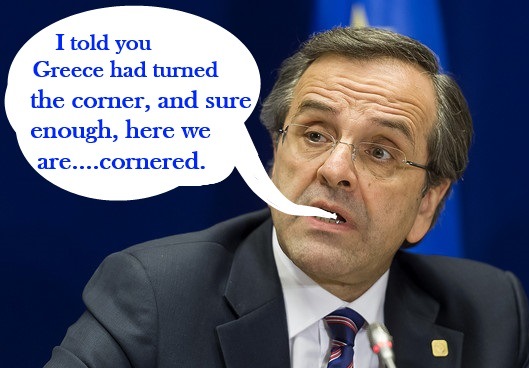 In two astonishing, disastrous developments for the Government of Antonis Samaras yesterday, first the national statistic office Elstat released devastating numbers suggesting zero likelihood of a recovery; and then EC Commissioner Olli Rehn warned there would be no debt relief for Greece until after the European elections in May 2014.

The latest economic, savings and Government expenditure figures for Greece just came out, and once again I owe a debt to Greek Sloggers who have pointed me at them.

It’s a shame all Greeks don’t read them, because they demonstrate quite clearly that – as The Slog predicted 18 months ago – Greek borrowing and debt are UP. And they also show quite clearly that (a) this is not just a jobless recovery but also a skint recovery, while (b) there simply isn’t any consumer disposable income left to drive the economy…because wages and savings are DOWN.

Finally, they suggest terribly strongly that Antonikis Samaras is going to face a few ups and downs himself. But for the moment, he has put his head DOWN between his legs and inserted it UP his botty sphincter.

The Greek borrowing figures are nothing short of catastrophic. To quote Elstat directly: (my emphases)

Well pop goes the weasel. And what a weasel it all is. Just kop a shufti at these disposable income numbers:

‘During the second quarter of 2013, disposable income of the households and non-profit institutions serving households (NPISH) sector (S.1M) decreased by 9.3% in comparison with the same quarter of the previous year, from 33.2 billion euro to 30.1 billion euro. This was mainly on account of a decrease of 13.9% in the compensation of employees and a decrease of 12.4% in social benefits received by households.’

Well fist me sideways with a stoat, whoodathunk it, eh? Tell me, do they teach economics in Germany? Or is there simply a subject called Weimar Inflation Compulsive Disorder? WICD, bro’.

But Antonikis’s betrayal at the hands of the European Commission would be a giant kick in the cojones for the Greek Prime Minister, if he had any. This is what Antonikis Scamaras said a month ago about the outlook for 2014:

“”Greece has turned the corner … After the end of the year, we will achieve a new lightening of the debt burden, which our creditors have committed to…it’s clear for everyone to see, even to the most harsh critics of the country. Everyone, except for some from the inside, here in Greece…It is not certain that they don’t see them. It is certain they don’t want to see them. They don’t want to admit that the country is leaving behind its past. Because they are stuck to the past”.

Excellent. “The train now leaving the past will zoom straight through Reality and into a future where economies grow despite debts getting bigger and consumption power dropping like a lead turd out of a robot”.

The glimmer of hope Mr Samurai kept on dangling like a shrivelled carrot in front of the Greek people was “debt relief”. Even if the relief train was still due to arrive on time, it would have to be one Everest of relief, because Hellenic borrowing alone quadrupled year on year, and the debt last year stood at 157% of gdp. It stood at precisely that in 2010….despite two bailouts costing upwards of €300bn Euros. And today, it is er….um, 169% of gdp. According to Greek Reporter yesterday evening, Greece was the eurozone member where [in Q2 2013] the biggest increase in public debt rate took place, at 19.9%.

Worse still for Prime Minister Smarterarse, Little Olli Reindeer (left) says the relief isn’t coming at Christmas after all. You see Santa doesn’t come down the chimney for naughty boys who tell fibby-wibbies about Golden Dawnies and debty-wetties. At least, this is the only conclusion one can reach after hearing about Olli Rehn’s utterances yesterday. Ekathimerini this morning reports that Rehn confirmed in Lithuania that it won’t happen until summer 2014. We have a Syriza MP to thank for asking the Big Question:

‘Greece will have to wait until next summer to find out whether it will be granted further debt relief by its eurozone partners and must be prepared for close monitoring of its public finances for many years to come, European Economic and Monetary Affairs Commissioner Olli Rehn has revealed. Responding to a question from SYRIZA MP Nadia Valavani during a conference in Lithuania, Rehn confirmed the speculation that there would be no discussion on how to reduce Greece’s debt burden any further before the European Parliament elections in May.’

Now, as every foole knoe, without debt relief Greece cannot survive past March 2014. It will default by then at the latest.

Over to you, Brussels-am-Berlin: explain, please. Oh, and erm…you too in Frankfurt, Mario: how are you going to print your way out of this one, Signor?

I post twice last month to say “Don’t let Greece drop off your radar”. However the Western MSM does or doesn’t report it, this is a mega-story: Greece is heading unstoppably to disaster, and it looks like the eurobanks are now ready to watch Greece go under. I sense that the hour of Tsipras may have come.

See also this other bad news for Antonis Samaras