“Yes, but what have the politicians ever done to us?” 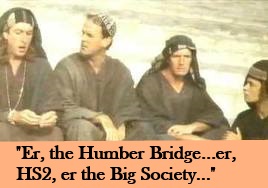 More and more these days we hear the cry, “Politicians are useless, we need to fire all of them”. I’m inclined to agree, but one shouldn’t then sit back on the sofa the following day and expect things to get better.

The sad truth is that politicians drive very little at all: most of the time, they grasp at some body else’s idiotic idea (Blair, Iraq and Murdoch; Cameron and HS2) or suggest that sheer puffery is actually a concrete idea (The Big Society) or simply do the bidding of monied supporters and civil servants (the EU, banking, media regulation, building programmes, housing bubbles and so forth).

Regulars will know I have felt for nearly three years now that we will not effect lasting cultural change in the West through a political Party. Form a political Party, and several to all of following things will occur:

Nigel Farage has learned these realities the hard way; which is why he accepted Murdoch’s tea invitation with alacrity, and really wants only to merge with the Tory Bastard Tendency.

Had I the energy left, I’d start an apolitical movement to starve the Westminster beast. As its staple diet is munneeee, the movement’s work would involve making life difficult for Whitehall civil servants, ISPs, tax collectors, banks, the media, multiple retailers, trade unions, estate  agents, the police, and Rupert Murdoch. Funny how that name keeps cropping up.

The best way to demonstrate the pointlessness of merely firing/imprisoning/hanging all the pols, however, is to use my personal case history over the last ten years. The key points are:

i. Swindled by Lloyds Bank/Scottish Widows during 2001-03

ii: Screwed over by pension managers who did nothing while things went tits-up

iii. Income decimated by Bank of England Zirp after 2008

v. Taxes increased thanks to EU membership/failure of Euro

vi. Value of French house shaved by 30% thanks to cheap Pound/higher taxes

Like I say, there are always ten. But if you take each of these in turn, the culprits are, financial service providers (3), central banks and treasuries (2), currency failures (3), civil servants (2) market manipulation (3) and personal (1). (That’s more than ten, because some problems aren’t mutually exclusive)

Only one of the events did me any good – manipulation of the gold price – and had I been greedy and stayed too long in that sector, further manipulation would’ve wiped me out.

Now of course, the interdependency principle means that treasuries are empty, sovereign debts massive, currencies all over the place and markets manipulated because of daft spending decisions made by politicians in the past. But this too is a dodgy premise: welfare is a political idea, but the wasteful organisation of it is a Whitehall/Town Hall cock-up; defence spending reflects political fears, but the impetus is maintained by the military and its suppliers;  apathetic export performance isn’t tackled because ‘professional’ politicians are clueless about such things, but historically high wage demands, ineffective jolly-trip Civil Service bollocks, and the utterly useless British Council have been more important factors.

That’s why I think para six above applies: knock the zoo keepers about a bit, and they’ll stop feeding the beast.

The main objection to such an idea is that “it’s too complicated to organise”. No it isn’t, it’s that the citizenry can’t be arsed because it doesn’t feel strongly/get informed about such things. But even our recent past is full of quick-acting people-power. After The Sun was rude about Scousers at Hillsborough, the paper was boycotted in Liverpool. It has never recovered. Hackgate was going nowhere until Milly Dowler’s phone was hacked by Newscorp employees.   Without that, we would not have two powerful people in the Old Bailey dock today. Mars in the US withdrew an entire new product line because vegetarians organised a boycott. One set of musicians knocked 30% off the American Airlines share price by releasing a derogatory album about them.

I know I’ve written this before, but it bears repeating as the situation gets steadily worse over time. You can really only pressurise politicians bigtime at general and bye elections. Politicians, you see, want your vote – and they don’t go bust if you support someone else…even if they bank with the Coop. Business, banking, Government organisation, the private media, tax collection, and the constabulary’s inability to maintain order all produce near-immediate panic in the self-styled élite within days. Getting in their way legally does not require 1970s-style banner marches and other demonstrations of neutered solidarity. It just requires some good minds to think about it, and then enough other people to join in.

Eric Cantona was ridiculed by the media a few years ago for asking the French to deposit no money and buy no products for a day. The media would do that, of course, because the media is paid for largely by advertisers. But Cantona was right to rail about Gallic apathy.

In previous years, we used to have the right and the power to withdraw our labour. Today we have but two rights left: not to consume, and not to cooperate. If enough people have the will, this would be easy – and 100% certain to be effective.

Earlier at The Slog: Secretly lifting the stone on bad press habits