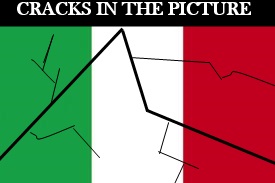 Are Draghi and Merkel playing games?

‘Three days ago, I wrote here that “The [EU] focus has now shifted bigtime to Italy, where the unemployment rate amongst 15-24s just soared to 40%….well behind Greece – but Italy is a far bigger and more industrialised economy. As Bloomberg reports pointedly, “the [eurozone] region cannot recover without Italy’s revival”. That simply isn’t going to happen.’

At the start of Summer – in June as I recall – the Italians shocked everyone with ‘news’ that the economy was turning round. Shortly beforehand, I posted this much-lambasted comment in another post:

‘Another of my long-running ClubMed hobby-horses (informed by Spanish and Italian contacts rather than guesswork) is that various governments in Rome have been lying for Europe about their true financial state for donkey’s years: they’re just better at it than the Greek elite. More and more of this is coming to light, but still the yields stay lower than a double-jointed anorexic limbo-dancer. Go figure.

Well alright, if you insist, I will. The markets must decide, as rusting iron ladies were wont to remark, but unfortunately markets are often driven by people on the other side of the Pond who don’t understand europolitics…..and couldn’t analyse their way out of a paper bag anyway.’

It turns out that June’s leap forward was nothing more than Italy’s data agency Istat changing the survey. It looked at a different “socio-demographic structure” and “sample structure”. Istat quietly revealed some details a month later, but only a handful of Italian economists were paying attention. Not all Italians (or bondholders) are convinced by the ‘just a clerical error’ defence. But the ‘change’ explains how the economy component of the confidence index jumped miraculously from 71.7 to 91.6 in one month.

After the miracle, I posted on June 20th (ever the optimist) ‘I’ll give you my conservative estimate: it will take the euro markets roughly three days to work out that this is an unholy cross between a sham and a scam. Then the nonsense will start all over again.’ So much for what I know: the point is that four months on, it’s a sham-scam turning into a scampering shambles.

Simon Ward from Henderson Global Investors (no relation) now says, “Italy is flashing red”. Not hard to see why he thinks this: Industrial production fell 4.4% in August, and new orders fell 6.8%. The Bank of Italy said credit to non-financial firms fell 4.6% in August (year-on-year), worse than in July. Business confidence fell back to 79.3 in September. And even Istat said this week that the economy is weaker than previously thought. GDP will shrink yet again in the third quarter.

Common sense told the informed last June that the ‘recovery’ was a mirage. Now we know it was a lie.

Meanwhile, there were queues outside ATE bank branches in Greece yesterday. Customers I spoke to said the excuse for not being able to cash cheques was ‘a computer breakdown’. Not many in the crowd believed it.

Piraeus bank rescued ATE in 2012, and the liabilities were put into a bad bank last May. But clearly, things haven’t been getting any better: largely unnoticed by the Western MSM, Piraeus Bank cut its entire workforce by 12% last month. Although Greek banks allegedly ‘secured their long term futures through the implementation of restructuring programs following successful recapitalizations in June’,  as we saw several paragraphs ago, not everything announced in June retains the scent of verity.

Reports in August optimistically suggesting that ‘Improved macroeconomic conditions are expected to have a direct positive impact on the [Greek] banking system, as the stabilisation of the economy will slow down the rate of new nonperforming loans, and also improve profitability – making more capital available to deal with problems’ –  is piffle on a par with Antonickis the Helmsman telling Greeks that the worst is over.

I think this could be one to watch…..and don’t forget that in the broader sense, debt relief for Greece has now been put back to Summer 2014…as reported here exclusively a week ago.

To make a disastrous situation apocalyptic, Butch in New Mexico reminded me earlier this week that the euro is rising against the dollar. In fact, in recent days it’s risen almost 8% against the dollar. This must raise the question as to whether the Berlin-Brussels-ECB axis of obfuscation is at its dirty work trying to push some or all of ClubMed into default. I can’t see the logic myself, but little Wolfie Wheelchair moves in mysterious ways, his blunders to perform.

Last night at The Slog: A question of trust