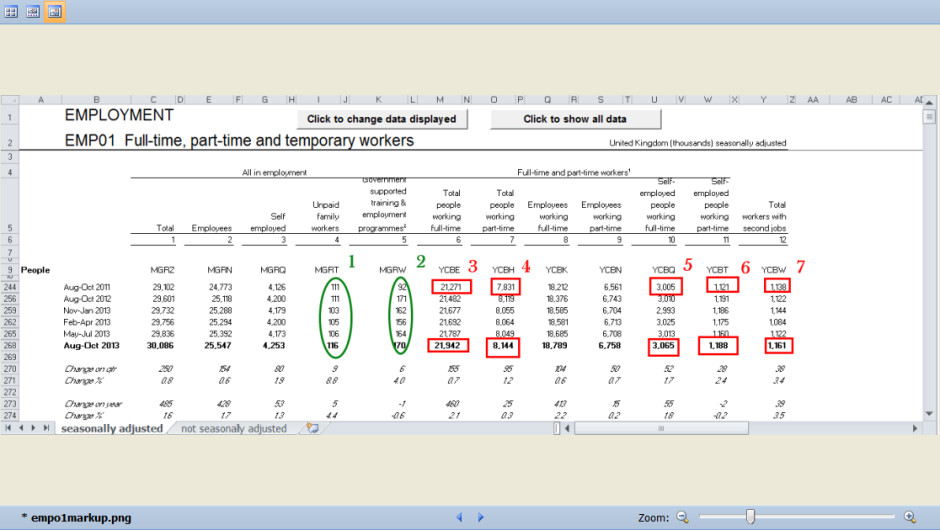 You won’t read this analysis anywhere in Britain’s main media titles, so I feel completely happy with calling it an exclusive. And if a site somewhere got there before I did, then I’d be happy to credit you. But what follows is a cast-iron presentation of what the latest Office of National Statistics (ONS) figures really mean…as opposed to what Government and old media would have you believe. They show a Britain working harder for less, creating fewer full time and entrepreneurial jobs, but also producing more low-paid employee positions within the corporate sector. Forget Left v Right: the United Kingdom’s employment structure is – just like our declining business and infrastructural ownership – yet another symptom of our waning independence as a nation

As your eyesight probably isn’t up to this page capture from the ONS site I’ve marked up, you can check the veritas of my findings here.

But in the meantime, you can (I hope) at least see that I’ve marked up seven headings – two in green and five in red.

The legend for readers is as follows: Green = complete fiddle. Red = things overlooked by the MSM. And all seven have failed to be exploited by Your Friend in Tough Times, the Ed Miller Band.

It’s important to make a number of general points, but these are revelatory rather than throat-clearing.

I’ve been very fair to the government and started the clock at 2011. I thought it only right to give them eight months to settle in, find the black holes, and generally uncover the fibs or OBS of the previous shower.

The two columns I’ve circled in green are, respectively, called “unpaid family workers” and “those on government training schemes”. Bizarrely, although they don’t have paid employment of any kind and aren’t in the open job market, they’re counted amongst the full-time employed. I have thus removed them from column (3) entirely, as that’s about as glaring a misdefinition as you’ll find.

Put together, the two columns add up to a growth since 2011 of 25%…so one can see why it’s useful to bung them in with real full-time employment…especially as the schemes have nearly doubled in numbers. But with a 28% real economic inactivity rate (that’s a staggering 8 million people) they’re still pitifully small. The cost of training our lost souls versus immigrating somebody’s else’s skills is, quite frankly, a far better long-term investment for an already overcrowded island.

Compare and contrast that now to the total increase in part-time employment at column 4, and all previous studies of what’s actually going on are borne out: the increase there (on a smaller base) is 313,000…or 4.5% up on two years ago.

That’s part-time employment rising 50% faster than full-time. Were one to suggest that (as studies suggest) 10.5% of those people would rather work full-time (but can’t find a job) then that knocks another 35,000 off the ‘real’ jobs being created…so the full time creation total now drops to 350,000. [Slightly unfair, but mild compared to counting QE as ‘economic activity’ in the UK’s growth figures].

The next two columns involve those working for themselves (self-employed) – full time in column 5, part time in column 6. This pre-SME has always been traditionally hailed as the new entrepreneurs coming through who will one day give Britain its big leaps into the future. Here, the increase is 60,000…at 2%, less than half the growth in corporate employees. Entrepreneurial business in the UK therefore emerges as being in relative decline…and at that level of difference, pretty rapid decline. Perhaps they’ve all had their offices repossessed by bankers.

Column 6 is equally telling. Qualitative studies (I did one myself some 15 years ago) tend to show that a lot of part-time self-employed are (a) underpaid in the main job and thus (b) doing a pin-money job from home. Effectively, they do the job to make ends meet – not from any burning desire to be the next Alan Sugar. These jobs have gone up by 67,000…. at 6%, three times the rate of full time self employed people.

They’re probably not dissimilar to the unlucky beggars doing two real jobs at the same time. Disgracefully, there are over a million of these folks, and over the last two years another 23,000 have been forced to use this as the solution to a life in which they are, inexorably, losing the salary v costs battle. They also effectively represent, of course, double counting….and thus another number to be taken off the 72% employment rate quoted widely in the press yesterday.

One shouldn’t dismiss that reference to ‘inexorably, losing the salary v costs battle’ as Ed Balls pretending to care on a good day, by the way: total pay rose 0.7% year on year in a period when inflation was running at 2.1%.

Thus as this site and many others have maintained since early 2012, real salaries are in decline: pay fell behind in real terms 1.4% YOY.  Project that forward, and even at constant inflation you see a real spending power loss of a further 14% by 2023….after a 30% loss in the last 12 years.

In turn, you can view those as ‘political’ points, but as a business-experienced apolitical blogger, they’re something far more serious: we are seeing a steady decline in the mass market’s ability to consume. Economically, that represents a frightening dead-end to make QE tapering seem mild by comparison. It is, as ever, the biggest elephant in neoliberalism’s trumpet-filled room.