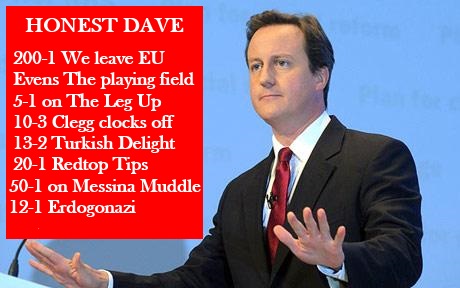 In fact Prime Minister, you lost bigtime because your guru announced his departure on the very same day that you warned us with great solemnity of the dangers of gaming machines. The AGA lobby is (so US press releases claim) preparing to mount an aggressive campaign across the United States to help to make the case for online gambling.

I think that, above all else, Dave’s unerring character judgement has been the lad’s strong point since he took over the Downing Street Decline Management job in May 2010. Let’s see now, we’ve had Recep Erdogan is a good bloke, I am the heir to Blair, Andy Coulson has been unfairly treated, Rebekah Brooks is my friend, Malcolm Brady is my enemy, Lynton Crosby seems like a fine man, Twitter is for twats so I’m (not) going on Twitter, Leon Brittan would make a good fill-in Trade Minister, Nick Clegg will make a popular Coalition partner, William Hague would make a good Foreign Secretary…..

Where will the PM go from here? Well, we’ve had our best brains working on this here at Slogger’s Roost, and it seems clear to us that the way forward for the Cameronian one is as follows:

1. Back Chris Christie as the perfect Republican 2016 Presidential candidate with whom to forge a global policing alliance

2. Move Theresa May to somewhere much more dangerous

4. Give Eric Pickles the Sport portfolio with a brief to expand the Big Society

8. Put the Barclay Brothers in charge of Community relations and affirmative homosexual action.

All it requires is for the Prime Minister to announce these dynamic changes in a slightly delayed Autumn reshuffle, and I think we can safely look forward to a comfortable Conservative majority in 2015.