A case of caveat emptor?

Booker and the blogosphere blow the lid off EU eco-lunacy, but Nigel keeps shtum

Nigel Farage is not what he seems, and you read it here first. Given a golden opportunity to damn Brussels forever, Farage has fluffed it. Why?

When I first started reading about EU plots to flood Somerset at the weekend, I spent about two minutes at one site before deciding the author was off with the fairies. I dismissed the story with the thought, “If there was any truth in this, the UKippers would be all over it like a rash”. I was travelling on Sunday, and so missed Christopher Booker’s piece on the subject.

But yesterday a respected Spanish Slogger started feeding me information about it. So I read a different and much better article, and followed the links. Astonishingly, the EU’s role in all this is very clearly not a looney-tunes conspiracy theory: it is environmentalism gone mad, and megalomaniacs deciding on the fate of tens of thousands of people….with no vote at all on the subject in the Brussels Parliament.

And the question remains: WhyTF isn’t Farage going in with both barrels about it?

An early trickle of lunacy starts in July 2004 with a ‘consultation’ document from the UK Environment Agency (EA). It had an intriguing title: ‘Making space for water’. Had the Dutch followed that strategy 300 years ago, they would not now have a country.

As early as page 8, however, the paper starts to give its agenda away:

So the Government reaffirms that it is committed to not drowning people, but then starts shifting responsibility for floods to the construction industry. The key word there is ‘managing’ floods. This is Whitehall-speak for “floods are going to happen”. The document goes on to start piffling about changed land usage strategies. I wonder how many Somerset farmers read this document at the time, or even knew of its existence.

It’s much further on, however, when the EU connection gets a mention:

Directive = Brussels. And this is confirmed three pages later:

Spookily, that report is also dated…July 2004. Well I never. (The Dutch presidency element is, to say the least, ironic).

But it is important to note here that the dimension being mentioned is about flood risk management – still seemingly about stopping floods, not ‘managing’ them as a necessary evil. Hold that thought, because the ‘risk’ word is an obvious weasel: the year before, an EU conference in Warsaw had used Somerset as a ‘case history’. Stunning in this extract is the Orwellian way the writer assumes that what they’re on about is common knowledge and a done deal: it is classic Brussels reinvention of history:

Veteran Sloggers will know that I’ve been boffing on for nearly five years about the woefully small emphasis given to food production in the UK – that one of the reasons we have such a massive trade deficit is that we import far too much food. Well, here’s one reason that dates back ten years: some eco-freak in the EU wants the Somerset countryside to be for public enjoyment…but also ‘returned to its undrained condition’. Hmm. I bet the Townies will just love sloshing about in fens mud.

But what about the farmers and the residents?

The Sun headline is that allowing flooding on the Somerset Levels was a matter of EU policy, introduced by a 2007 Directive and consciously adopted by the Environment Agency in 2008.

Now I can understand why Oppposition leader Ed Miliband has nothing much to say in the subject of flood management: this madcap eco-scheme happened on his watch….along with more propellers up and down the land than there were on D-Day. But where is UKip on the issue?

The full detail of this incredible train of events is covered fully (and admirably) by Harrrogator Richard North at his site here, but I want to move things on in today’s Slogpost by returning the spotlight to that fine Anti-EU warrior Mr Nigel Farage. Since the flooding began just in time for the Manchester by-election (which as you know, is taking place quite close to Somerset) the Farage gob has been ever-open on the subjects of slow Government reaction to the flooding, cockups in Defra, and the need for Dad’s Army to be recreated as a flood-fighting force.

But the truth – that this is another EU secrecy Snafu – is known to Mr Farage….as he gave away by remarking during a Sky interviewer’s reference to Defra’s role in the flooding, “They seem to want to follow European Directives to the letter of the law”.

That was it. With the goal at his mercy, Mr Farrago booted the ball firmly into touch. Why didn’t Niggle bury Cameron, Paterson, and the entire LibDem Coalition crew by saying “This has happened because of the EU, and you f**king liars in Westminster and Whitehall are trying to hide that fact”?

Here is my suggestion: could it be something to do with Nigel’s not entirely secret desire to become part of that Establishment…and forge a right-wing agenda along with the Rabid Right? Or might it involve the fact that the construction industry (purveyor of ooddles of wonga to the Conservative Party and thus given permission to break every planning rule in the book) has done, um, nothing at all in relation to the role it was handed by the EU flood management directive?

David Cameron’s reaction thus far has been to refuse to rule out rolling heads in the EA. Owen Patercake is probably off somewhere finding badgers. But despite the best efforts of Booker and Blogosphere, I would wager that public awareness of Britain’s poodle-like relationship with Brussels over this is largely unknown.

It’s time to raise that awareness.

Does anyone really imagine Camerlot would ever let the British have a level-field vote about staying in or leaving the EU?

And does anyone know more about the strange silence of Farage the Brussels Basher on the subject of EU flood management directives?

Stay tuned: this could be a game changer. 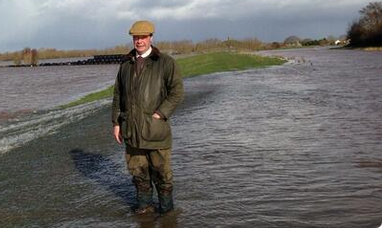 What’s that you’re standing in, Nige?

Earlier related Slogposts about a Farrago of perfidy: Noah Farage & the photo-opp that never was