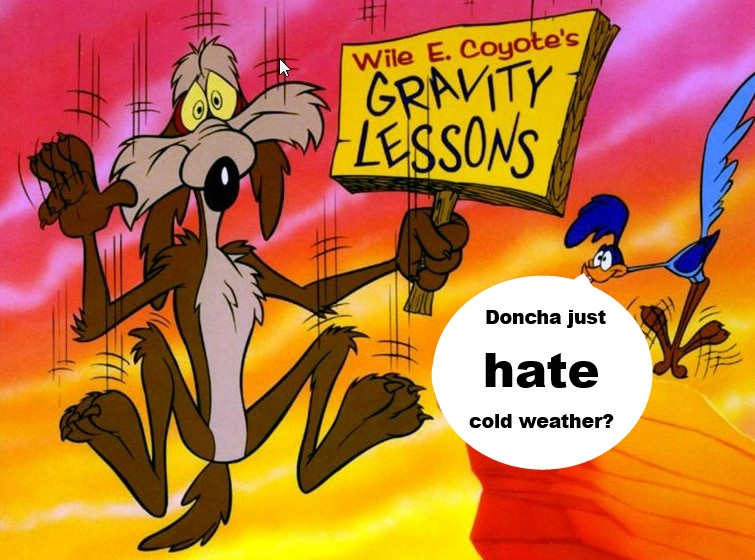 At best, the cold winter only explains 15% of the disastrous US gdp numbers

The denial of reality continues. Yesterday, however, we witnessed what might be – who knows we’re not sure although you never can tell but it might be just another false dawn – the Beginning of the End. Naturally, it was presented as “unexpected”, “a surprise” and evidence that things are “more fragile than we thought”, but the US economy performed like a mosquito in amber during the first quarter of the year. In January, Dan Hannan said it was booming (so let’s get fracking) and three weeks ago AEP said it was “fixed” (and thank God QE worked). But now it’s flatlining.

When you consider that, given Yellen shows every sign of being just as devious as Bernanke in the way she’s cut QE but not really cut it at all, this is disappointing news. Some of us saw it as inevitable news, and a whole shedload of us wonder whereTF they get the ‘we’ word from, but there you go: in 21st century fiscal economics, the inevitable is always a surprise. It’s just another dimension to the infinite fun of neoliberalism – to which there is no alternative.

But if nothing else, the Fed is being consistent. After being wrong four years in a row about the potential of QE, it now insists on being regularly wrong about the ease of dumping it. In all, we’ve had nearly five years of this alchemy so far, and the move from spending all our money to zero effect to spending less of it to negative effect has mathematicians all over the planet trying to work out the missing element in the triadic equation. But in reality, it looks like this:

The zero at the end, by the way, stands for ‘nothing left’, not nothing. However, I am here to point out to the naked quants that there are no xs or ys in this equation: it is merely the formula for neoliberalatum. This is the magic substance which, along with phlogiston, guides the sun’s progress around our obviously flat Earth via the locomotive miracle of bollocks.

The right wing press is not commenting, so to rub it in, let The Slog make it clear right now that the level of American economic “growth” in Q1 2014 was just 8% of what the fantasists expected. But the FT takes the lalalala prize this morning by not mentioning it at all. “My name is the US economy, and I am not here”. All aboard for the Cuckoo Nest Special, and don’t mind the gap…it doesn’t exist.

Still – nihil desperandum squire, the explanation is to hand: it’s all weather-related. Yes, the weather has a direct effect on fully 92% of all economic activity in the US. This is hogwash, as US climatologists have known for years: despite the Fed calling out the bed weather in March, there’s very little solid, empirical research on the effects of bad winters on the US economy. The Fed admits that its beige book is based on “anecdotal information”, and in many instances the effects on some industries–construction and cars–are cancelled out by the effects on others like ski resorts, online shopping and energy for heating.

In February, Goldman actually did some proper maths, and concluded that ‘a bit more than half of the slowdown has been caused by transitory weather-related factors’. The firm neverthelss expected GDP to take a 0.5 percentage point hit in the first quarter, which would’ve yielded a result of 0.7% growth. The actual figure was 0.1%. Or 15% of what Goldman expected. Still what we pure mathematicians call miles out.

Chinese war strategy say, if advance through mud in tissue paper tank, do not blame ineffectual tank performance on mud.

Allow me to summarise what the preceding analysis above means in the jargon-deficient space.

As we the dopey doomsayers have been saying since 2009, the US is now back into the corner it printed itself out of in that year. The lousy Q1 2014 results caused the Buck to fall bigtime, and this will now make American exports cheaper…but the dollar inched upwards again soon afterwards. The bad news is that a jittery stock market is watching QE going in the same direction as the economy, and under the laws of economic gravity, that means the Dow must be headed the same way. There have been several market top-out signals in recent weeks, and so that conclusion would make further sense. I can’t think of any other variable left for the Fed to manipulate. And yesterday, American deficit fixing was reported as on the verge of producing “a crumbling infrastructure”. As I blogged earlier in the week, 32 States are now effectively trading insolvently.

Wall Street opinion leaders have now reached the stage where they will believe any old tosh, and cling onto the flimsiest straw. Thus, while U.S. stock-index futures edged mostly lower Wednesday (that’s people bear-betting) most of the rentagobs were going weatherweatherweatherweather and probably the weather yesterday afternoon New York time. The numbers don’t support that view but heh – what else is new? I will leave merely with this, the best example I’ve yet found, of black is white and today is not Marble Arch, it’s Tuesday…

….and close with my own little homily direct from the witches’ brew:

If Coyote falls when the growth be due, watch ye then what Hillary do

You read it here first.

Yesterday at The Slog when WordPress actually managed to publish: Why all things are about to pass

(The battle for control of my laptop continues. Having knocked out the holders Google in the Search Engine Cup Quarter Finals, Bing is now facing a tough gangsters’ local derby with Yahoo. The winners will meet the winners of  NSA v GCHQ in the next round.)