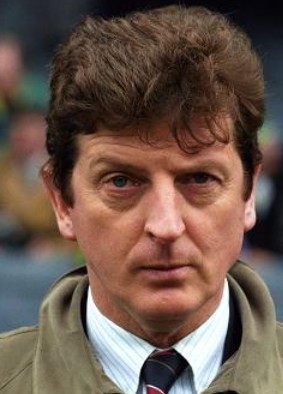 Newscorp Premiership devotees were vindicated tonight as an FA jury found the England team not guilty of being crap, but its manager Mr Roy Hodges (left) very guilty indeed of conspiracy to make them crap. As to charges relating to the professional game in general, Mr David Cameron, Mr Bruce Grobelaar, Mr Jeremy Thrope, 18 Premiership managers and seventeen members of the FA Council were all found not guilty of conspiring to be corrupted by Australian sociopaths offering huge amounts of spondoolicks in return for turning Association Football into a live television pastiche of Let’s GBH the Ref.

Trial Judge Ernest Saunders said he had forgotten almost all of the evidence presented, and he advised others to do the same “for the good of their health”.

Commenting on the verdict, TV football expert Andy Bungsend said he was disappointed that the jury had not taken advantage of the prosecution’s weakness down the left channel, but he felt that – on the whole – the verdict was a just one in that “under Hodgesisizz management, the team has shown itself incapable of crossing a ball and then the striker’s ‘eaded it in an’ ‘ittin’ the target right is what iss all abart”.

The Prime Minister apologised for having appointed Mr Hodges, who he now accepted was “a man I trusted implicitly and who let me down thus none of this was my fault, although I do accept that his ability to hide an innate ignorance of the game from me was merely a feature of his evil intent which, due to my trusting innocence in such matters, I did not pick up on. But this too is evidence that our longterm economic plan is working and you all love me really”.

Flame-haired transplant and England striker Wayne Phoney summed up the relief of his team colleagues by observing:

“Well de boss said yerknow that the udda team would only ‘ave ten men and be short of legs and breath like, burrit it dint tairn out like darratall. Burri always ‘ad confidence in de lads yerknow to play for demselves like, an’ so ‘avin come through dis ordeal like, weez lookin’ forward to a rouzun’ welcome bakome”.

Speaking through his lawyer’s arsenal of dissembling bollocks, keen Gooner Mr Piers Morgan said that the England team’s acquittal was “a victory for everyone who wants to be a hack, and hack….I am delighted to see that this fundamental right of all tabloidistas has now at last been enshrined in the bowels of our Constitution.”

Keen follower of the national game and non-tax-paying foreigner Rubik Merdecock said, “Oim durrlided by the verdict. Thit Camron bloke is a feckin’ dingo and the way to gittim art is ter buy moi newspapers, and vote SNP”.

London Mayor Mr Doris Jobsdone was unavailable for comment, due to a subsequent horizontal engagement.