Nerds and other animals

I need someone to explain something to an older guy who is reputed to have an IQ of 142….and so must be me: whyTF are things rendered both slower and more complex than they were before somehow ‘progress’? And why do the folks proffering this unwieldy crap think the answer is to give us all fewer instructions than we had before?

I’m obviously talking about IT and telecoms, because I mean what on Earth else would one be talking about? I’ve met just the three paedophiles in my long and wandering life, but I’ve yet to meet a multinational techie after sales system more engaging than any of them.

In the good old days of 3G camera phones, this is what you did to transfer pictures to your laptop: connect the USB, press mass storage, and Robert est ton Oncle, Francois. But not now. Now there’s an app. I mean of course there’s a f**king app, you’ll need an app to pick your nose before we’re done. But the Kies app takes you to this page: 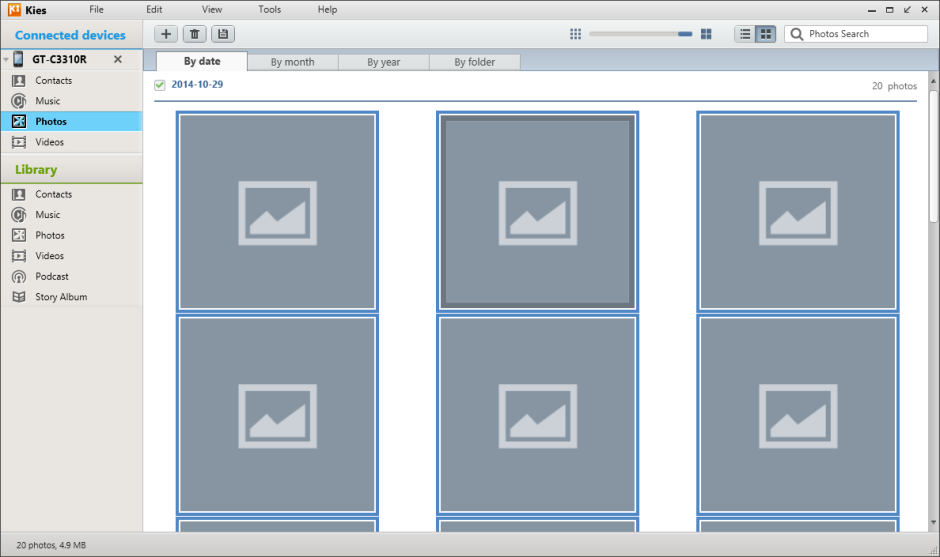 Have a good look round this page. It’s like Where’s Wally. Five headings at the top, and six symbols down below. Which one do you think is the mass storage button, children? 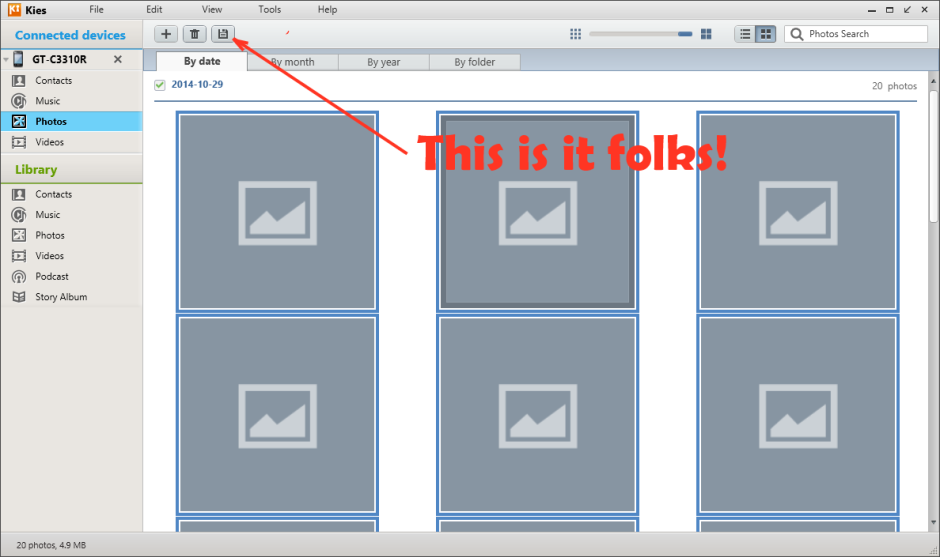 Did you get it right? No of course you didn’t, because you weren’t born with your brain in your little finger and a penchant for doing bloody Sudoku. Frame in on the symbol: it looks like the sign at French autoroute service stations telling you were to dump the motor home unpleasantness you’ve been collecting for the last three days. What it bears no relation to whatsobleedingever is ‘save photos to pc’. Not only is it next to a plus sign and a trash can, it isn’t under the heading above it called ‘Tools’.

Next time you’re about to do some DIY and you’ve lost your voice, here’s a tip: show your partner a piece of card with a shit-dumping diagram on it when you want to ask where the tools are. That’ll get the idea across. In about three weeks.

Oh and by the way, before this you have to right click in a carelessly anarchic manner in order to bring up some options. The 7th one down out of 13 says ‘Choose all photos’. The Nazi who invented the Enigma Code had nothing on the pillock who dreamed that sequence up.

What is the point of Apps? I realise we’ve been here before, but the more I use these instruments of mental torture, the more I understand that one-step actions have been given the Geithner leveraging treatment…because it now takes 383 unwieldy maneouvres just to sign in to something. “Get improved three-step verification!” yells WordPress in a dangerously surreal invitation – as if some troll was really that interested in being SlogforaDay.

Whenever this discussion comes up in ‘real life’, I often wind up saying, “Remember: this is the community that invented computer viruses” – an action up there with the idea of developing myxomatosis for leopards. But while it stops the conversation in its tracks (amazing how few bright folks have ever had the pc virus/Nerd thought) it doesn’t really answer the central question that continues to baffle me: are software designers human, or a sadistically autistic alien species suffering from obsessive compulsive disorder? Because how else would anyone the right side of the asylum walls produce apps churning out downloads that you can’t screencapture, can’t highlight to cut and paste, and then can’t get your arse out of without going right back to the old Windows 7 start menu again – or, if all else fails – dialling 999 or 911?

In the olden days (and sadly, I now come from there) there existed a phrase for madness called ‘Bats in the Belfry’. I think it’s time this was brought up to date, with the transitive changed somewhat to create a contemporary aphorism. My starter for ten is ‘Look in any belfry, and you’ll find more techie nerds than you can shake a stick at’.

From nerds we move on swiftly (or in their case, not) to toads. I will tell you something about toads: they were not designed for jungle warfare. Whereas the Chindits and Japanese could be stealthy in such environments, your toad is not a silent mover. But at this time of year – at least, on my land – it is back to the swamps for yer toad. So I get hordes of the buggers making their slow and noisy way back down to the dampness below me here.

If you’ve never heard this progress before, it can be unnerving: the first Autumn I spent here, I was happily peeing in the garden at night the way you do, when it sounded like a herd of poltergeists had invaded. This can have a regrettable effect on a chap’s urinary aim. But not as bad as widdling into a strong wind, which blokes tend to do when they’re a bit pissed….and for the damp consequences of which, of course, they have only themselves to blame.

“I’d rather have a hammer than a nail” Simon & Garfunkel sang five decades ago, but this afternoon I was thinking of an appropriate Slog version of this American folk-rock classic:

Two mornings I awoke at an ungodly hour (the changed hour is still affecting me) and decided to set to on giving the bedroom a good vacuum. But as I switched on the machine, this noise greeted me:

It turned out that a mouse had set up home in the flexitube….and then become stuck in the entrance to the cylinder. I wasn’t best pleased about this (I’m sure the mouse wasn’t either, as he’d clearly suffered first asphyxia and then a broken neck) but I was feeling more sorry for myself than the rodent as I descended the spiral staircase to the kitchen, thence to venture outside in order to un-mouse my Siemens 450-ZK housed in tasteful burgundy and grey plastic.

A little later I came back inside to work on a post begun the previous evening, and after no more than a couple of minutes, I saw another mouse flitting along the shelf above my cooker. The bloody vandal toppled a bottle of olive oil which promptly smashed on the unforgiving kitchen floor below.

I wouldn’t mind, but this was Kardamyli olive oil sold to me by Greek greengrocer Eleni last year, and the stuff of which historic dipping sessions are made. But one daft Mickie had blundered into it, thus wasting what is – let’s get real here – the world’s best olive oil.

This is how wars start. Because not only did I have to mop up the best part of 40 centilitres of thick green olive oil, I also had to apply whole oceans of de-greasing cleaners in dayglo purple containers (called things like Bang! and Boom! and Nuke!) in order to stop the kitchen floor behaving like an ice rink.

I have a disturbing feeling in my water that winter here is going to turn into Slog & Jerry.