Out there in the Channel, I suppose it’s quite hard to keep up with events, especially if the only person you meet is your twin brother. This was somewhat apparent in today’s Daily Telegraph: 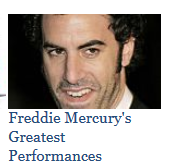 I wonder how few readers have noticed the remarkable resemblance between Freddie Mercury and Sacha Baron Cohen?

Over at The Mirror, when not cooperating fully with the police on the subject of phone hacking, the subeds there are still engaged in their main activities, struggling with English grammar and lists. Both are apparent in the paper’s coverage of some new child-abuse developments: 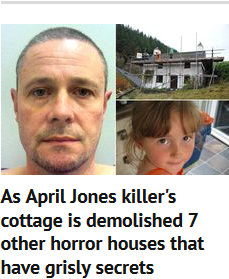 Do you really want to know about this Magnificent Seven? Or seven things you never knew about your brain…if you have one. No brain is needed for The Sun, which has brought Agony Auntism screaming into the 21st century: 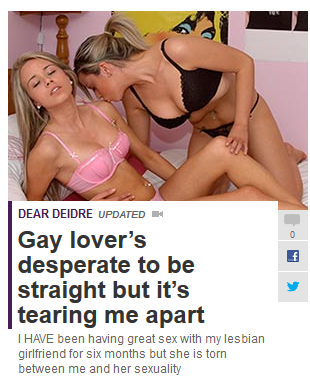 Er, no, sorry Rupert….I’m lost already: the headline says the letter-writer is torn, but the body (nudge-nudge) copy says her girlfriend is torn. Ah, right – they’re both torn. Um, but they’re having great sex and yet the partner is desperate to be straight, which isn’t quite the same as being unable to choose between her lover and her sexuality.

They’re torn alright, no doubt about that. But are they going to be scarred by it? You know – have their life ruined for ever the next time Ed Miliband puts his hand on their knee? We aren’t told. But this is the news corporation that Camerlot is cheering on as the replacement for the BBC.

Over at The Guardian, Rusbridger’s Right-On writers are very much on-message with Labour’s new strategy of being nastier than UKip:

Rachel the rampant is a-vowin’ an’ a-puckerin’ up for some clamping down on those terrible EU migrants like the Poles who work twice as hard with better results for half the money than their Brit competitors. All this year, Ed Balls’s only idea has been to appear even more neo-liberally globalist than the Draper. Now the Ed Miller Band is aboard the bandwagon moving the goalposts further to the right on Johnny Foreigner.

It’s hard to know just how Evil Genial Faisal Narage will respond. Whereas the Tories merely want to crack down on migrants, Nigel wants to lock them out forever. That means there isn’t much blue water between the Three Titans going forward. I suspect that Boris Johnson’s next move will be to suggest mowing them down on the beaches, in which case Barrage will call for RAF bombing missions to Romania. God knows what Rachel will do then…but whatever you do, Ed – don’t say you disagree. Ooooonononononoooo dear me no. 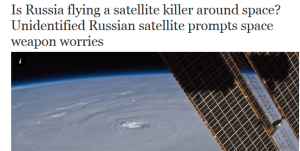 Oddly enough, the answer to that headline appears to be “we don’t know”: but the build-up to that conclusion is strangled in the usual scrotal sac contents. ‘A mysterious Russian object is being tracked by space agencies, giving new life to fears about the increase of space weapons.The satellite, dubbed Object 2014-28E, has grabbed the interest of official and amateur satellite-watchers because it is taking a confusing path and its purpose has not been identified…’

What’s mysterious here is that there’s no new life at all in my fear of space weapons, and I can’t imagine anything much sadder than being an amateur satellite watcher. But that name – 2014-28E – certainly does get the old spine tingling. The Indie continues, ‘Some think that it could be collecting space junk, helping to clean up the useless satellites that are floating around space. Or it could be providing fuel or repairs to other satellites….’ Now hang on, hang on, that’s not a story, so let’s get to it:

‘It could have a number of functions, some civilian and some military. One possibility is for some kind of grabber bar. Another would be kinetic pellets which shoot out at another satellite. Or possibly there could be a satellite-to-satellite cyber attack or jamming…’

Is a grabber bar like a sex haunt for aggressive men and pliant women? “Singles bars are for wimps girls, if you like your guys tough, come to the Grabber Bar”. We just don’t know. In fact, we don’t know anything about this object…not even, I suspect, if it’s Russian at all. Perhaps it’s Crimean, or possibly South Ossetian.

I have my own theories. I think it’s up there in the FT and the Indie on a mission to fill space….and find something else despicable that Vlad Rasputin’s up to.

One thing we can be sure about in the media on most days: almost all the facts, interpretations, views and opinions will be wrong. This is, after all, our basic human right: to read bollocks that’s wrong most of the time, and thus feel at home with the paper we read all of the time.

More expansion upon this theme later.

Last night at The Slog: The might’ve beens and disasters of life