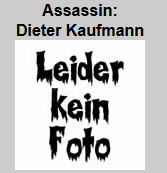 On October 12th 1990, long-diagnosed schizophrenic thirtysomething Dieter Kaufmann fired three shots at Wolfgang Schäuble at a political rally. The gunman was found unfit to plead, and committed to a mental institution. Yet he was released in 2004. All the standard internet searches have been cleansed to remove any further information about either the event or its perpetrator. In a two-piece special, The Slog investigates.

If Dieter Kaufmann was mad, then there was a certain method to his madness. Kaufmann’s motive for trying to assassinate the German Interior Minister was, he claimed, Schäuble’s fanatical support for a law allowing German security agents to assassinate terrorists without trial. Perhaps Herr Kaufmann was a Gilbert & Sullivan fan.

It is curious (to me, anyway) that 25 years on, it seems impossible to find out on the internet what happened to Dieter Kaufmann. The by now classic red-light warning at Google is that ‘some pages have been removed under privacy laws’….which is Do-No-Evil Speak for ‘security agencies are keen for Herr Kaufmann to become an Unperson’. And that is precisely what he seems to have become.

Wikipedia offers us this:

At Google, this is what the search for Dieter Kaufmann reveals: 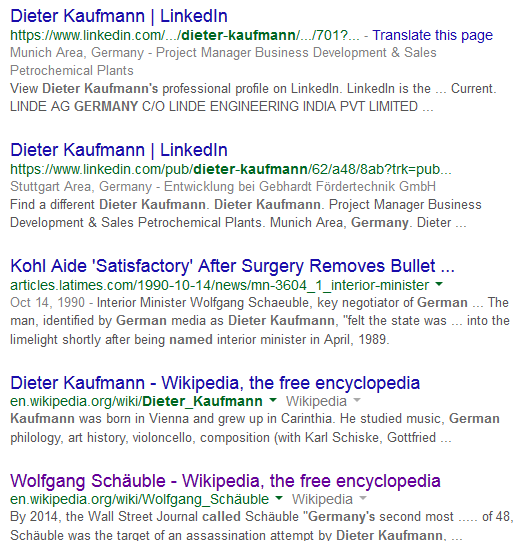 Searches for ‘Schäuble-shooter Dieter Kaufmann’ and even ‘The trial of Dieter Kaufmann’ produce nothing. Here is an allegedly schizoid-hallucinatory-paranoid-psychopath (he certainly had the full set) who premeditatively shot a fancied future German Chancellor, disabling him for life – but neither Google nor Wikipedia has anything about his trial and what happened to him….beyond his having been 37 (or 32 or 36, depending on source) when he did the deed; using three bullets; and being released from a mental institution for the criminally insane in 2004.

At most, this would make the would-be assassin 62 years old this coming October. The chances are he is still alive. He was what The Sun would call ‘TRIPLE-MAD GUNBEAST KAUFMANN’, or ‘FREED DANGEROUS KRAUT WEIRDO NUTTER KAUFMANN’, but despite the existence of Bild Zeitung in Germany, there is no mainstream search-engine record of any reports anywhere in the press there about his release. 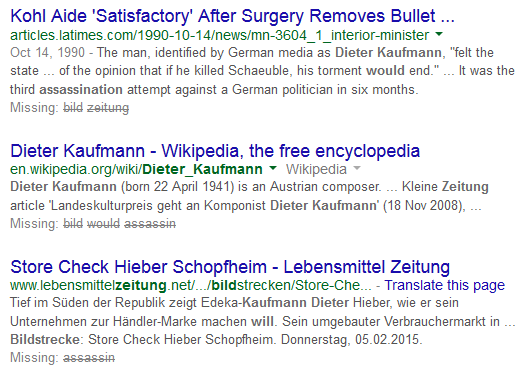 Note the ‘deleted’ lines after each entry (it goes on for pages) in which ‘would-be assassin’ and ‘Bild’ are removed from the search formulation.

All this offers two tricky questions, I think: if he was all those lethally disordered things, how TF did German medicine cure him by 2004? (We’d like to know, as it must have been a revolutionary breakthrough). And second, if he had that in reality incurable melange of isanity, why TF did the German authorities release him at all?

Now loyal Sloggers know I am a serial rejector of conspiracy theories on the whole. But ‘after the event’ air-brushing of information sources is both security services routine and big business: the ghastly ‘PR’ abortion Bell Pottinger has earned millions doing it on Wikipedia – usually on the side of the black hats – and Google had to buckle when the élites arm-wrestled them into censorship on Twitter. These are conspiracy facts, not theories.

Last but not least, Wolfgang Schäuble’s entire career has involved the undermining of the rights of democratic citizens through the use of media manipulation, secret double-cross, mendacious fabrication of the full story – and all the other tricks professional spooks use. Wolfie is not a politician, so don’t be fooled: he is – like Putin, McCain, and before them, Airey Neave – a State agent engaged in what is laughingly called The Defence of the Realm: politics was and is merely their cover.

As I suggested at the outset, for a ‘lunatic’ Dieter Kaufmann understood the irony of assassination used against an agent of lawless State assassination. Very few people now doubt, for example, that assassination through poison is the modus operandum of choice for Vladimir Putin’s agents. And Airey Neave was assassinated by the IRA for shallow grave death-without-trial duties he organised in Northern Ireland under Margaret Thatcher’s administrations.

Where did Kaufmann come from? How did his family background shape him? What were his political affiliations? Did he reach 32-37 without his diagnosis being obvious? Where is he now? The old media, the internet’s search facilities and the blogosphere tell us nothing.

It would, I suspect, be naïve to call this a mystery. More accurately, it is a riddle. With a mystery, one doesn’t know anything: with a riddle, the one thing missing is why.

But here and there, little by little, snippets appear to increase one’s suspicions. For example, Kaufmann had moaned for over a decade about ‘secret government transmitters torturing him with pain’ – to, variously, doctors, newspapers, and ministers of State. He had contacted his MP, and on several occasions launched unhinged legal actions against the German State. Some years ago, David Rose wrote, in The Observer Magazine, a fascinating study of what he called ‘fixation and psychosis’ as an ever-present in political assassination attempts. Compare and contrast this account of What Happened Next between the case of Dieter Kaufmann, and that of the attempted kidnapping of Princess Anne from her car in the Mall in 1974, in which Ian Ball shot and wounded four people, including her chauffeur and bodyguard:

‘A chronic schizophrenic, Ball is still in Broadmoor.’

Now compare the Google entries: type in ‘Ian Ball the Mall Princess Anne’ and you get, first go, 111,000 results – many of them updated over time and all chock-full of information about Ball’s past, present and future – he is thought ‘incurable and dangerous’…but allegedly, his symptoms are nowhere nearly as deadly dangerous as those of Kaufmann.

Now go to Wikipedia: here we get 745,000 results, and second up this account (my emphases):

‘Ball approached the Princess’s car and told her of his kidnapping plan, which was to hold the Princess for ransom, the sum given by varying sources as £2 million or £3 million, which he intended to give to the National Health Service. Ball then directed Anne to get out of the car, to which she replied: “Not bloody likely!”, and briefly considered hitting Ball.Eventually, she exited out of the other side of the limousine and another passing pedestrian, Ron Russell, punched Ball in the back of the head and then led Anne away from the scene. At that point, Police Constable Michael Hills happened upon the situation; he too was shot by Ball, but not before he called for police backup. Detective Constable Peter Edmonds, who had been nearby, answered and gave chase, finally arresting Ball.

All of the victims were hospitalised, and recovered from their wounds quickly. For his defence of Princess Anne, Beaton was awarded the George Cross, Hills and Russell were awarded the George Medal, and Callender, McConnell and Edmonds were awarded the Queen’s Gallantry Medal.Ball pleaded guilty to attempted murder and kidnapping, and was detained under the Mental Health Act.

The incident was the closest in modern times that any individual has come to kidnapping a member of the Royal Family, and prompted higher security levels for the Royals. It also served as the focus of the 2006 Granada Television produced docu-drama, To Kidnap a Princess, and inspired story lines in the Tom Clancy novel Patriot Games and the Antonia Fraser novel Your Royal Hostage.’

So: Ball was deranged enough to still be in Broadmoor over 40 years later, but was found fit to plead – and pled guilty. He was found guilty, and we know the sentence plus the details of the trial. Tonto or not, Ball had devised what most would regard as a good thing to do with the money he hoped to obtain. And his scheme has been the subject of endless articles, documentaries, dramas and pulp fiction ever since.

But the considerably more murderous (allegedly) mad person Dieter Kaufmann served just 14 years, went back into the community, and disappeared into anonymity.

Googling ‘German media mentions of assassin Dieter Kaufmann’s fate’ produces 69,000 results. I admit to giving up after 20 pages, but not one of the entries I read offered any information about his fate.

Trying it in German (Attentäter Dieter Kaufmann Schicksal) gets 492,000 results, but lots of this:

That’s to say, the key word Schicksal (fate) has been deleted from the search.

All of this mullarkey strikes me, after twelve years of investigative blogging, as unusual to the point of highly suspicious.

To be blunt, the evidence of systematic – and probably systemic – censorship here is blindingly obvious…and it worries me: because he who controls information from the past has the ultimate power to deflect, discourage, depress and deny Truths in the future. That is the stuff of which 1984 was made, and why George Orwell was perhaps the greatest genius in the field of prescience we have even seen. And it is exactly the future that makes heartless security agents like Wolfgang Schäuble happy to the point of tumescence.

Given the current state of digital technology, one could say that the old adage ‘Information is Power’ has not yet morphed into ‘Disinformation is Absolute Power’. Thus it is still possible – by digging further – to look more discerningly into the life, times and motives of Dieter Kaufmann.

The results of this process I hope to present at some point during the weekend….gardening, FA Cup Final and terrace construction willing.