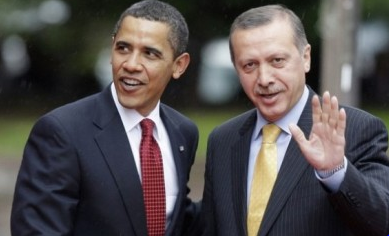 “Look Mum, it’s me with the President”

A bomb goes off in Istanbul, and immediately three things happen. Recep Erdogan gets near-global sympathy in the media, twitter is flooded with posts saying how nobody cares when Turks die in atrocities tut tut such hypocrisy, and all cool, objective analysis of motive ceases. So I thought I’d try to fill the last of those brain voids with some straightforward, speculative analysis: not conspiracy theory, just common sense.
First up, it is important to note that the Turkish leader has a long track record of creating events that suit his purpose. There was the ‘Syrian jets bombing Turkey’ bollocks of three years ago that proved to be utterly false….and which his own citizens rejected out of hand when he tried to whip up anti-Assad hate among the electorate. There is his at best dubious (to me, obvious) role in the creation of the ‘second wave’ of migrants into Europe, and the desperate attempt by Angela Merkel to bribe him into not doing it again. And of course, we mustn’t forget his denial of supplying arms to the risibly titled ‘Peace flotilla’ to Gaza via the Turkish pirate-grab ports also known as Greek Cypriot property.
Second, there is the matter of what is sometimes called Erdogan’s duplicity, although it is clearly inappropriate as a description: such would only be valid if Recep was a double agent, whereas he is really infiniplicitous. This is a man who has membership of NATO purely because, sixty years ago, President Eisenhower wanted a base there from which to point missiles at the USSR. He seems to toe the line on NATO anti-terrorism, but continues to supply ISIL/Daesh in Syria from routes that always lead back to his illegal bases in Iraq. He claims to be against all forms of terrorism, but terrorising the Kurds is his favourite hobby….when he’s not busy arresting police and Opposition members who dare to bring charges against his rapacious family. And he ditches ISIL cells who support folks he doesn’t like, while being fulsome with munitions for those ISIL cells who want Basshar Assad out. Recep Erdogan is a stret-wise prostitute: most news about him is a thinly-disguised negotiation about the price of a f**k.
I have friends all over Europe – especially in Greece – who insist that Erdogan has but one pimp, the Natotaur – a fabulous beast with the head of a General, the haunch of Lloyd Blankfein, and the hind-quarters of an excrement-emitting Congressman. Perhaps this has something to do with the Greek penchant for legendary hybrids, but I doubt it: the Natotaur is no myth. Where I differ from the simple whore/pimp analysis is in its depiction of Erdo as nothing more than a craven creature. All the signs suggest to me that this is a prostitute with the ambition to evict his pimp and run the brothel single-handed.
If I make the bloke sound like a cross between Dorian Gray and the Antichrist, then let me correct that impression: Recep Erdogan is the AntiataTurk. Ataturk founded the basis for modern Turkey by putting the Islamic clergy back in their box; the current Turkish leader wants to open the box and release the mad dogs of Islamist war. For the whore is also a megalomaniac….and across the globe, he is being persistently underestimated. On this and almost every other dimension, there is only one truly accurate parallel for this man: Adolf Hitler. Recep dreams of a Caliphate conquering Europe and the Near East, with himself as the Second Coming of Mohammed….reporting only to Allah.
Let’s now examine motive.
ISIL hasn’t claimed responsibility for the bomb – not their usual approach. But Erdogan has directly accused them of responsibility….and his Prime Minister has declared the suicide bomber to be Syrian, with connections to Islamic State. US and European opinion beyond the élites has of late been critical of Turkey’s soft approach to Jihadism in general and ISIL in particular. So to say the least of it, this atrocity has arrived at a most convenient time for Erdogan to play tough-guy….against a group he persistently and blatantly supplies with support.

Take a look at the photo circumnavigating the globe purporting to show the explosion. Note how it is taken at the exact moment of detonation: a 100-1 against stroke of luck….or a pre-planned shot?

So much for Erdogan’s motive. Now we need to ask an even more obvious question: what in blue blazes would make these jihadists want to tick Erdogan off? “Because they don’t like him joining a Muslim alliance against them” one self-appointed expert suggested in the media yesterday afternoon. Erdo is a card-carrying member of NATO, but has that fact goaded ISIL into attacking him before? “Under intense pressure from the United States and its other NATO allies, Turkey has begun to reassess its support for anti-Assad groups” opined the Boston Globe yesterday. And thus, allegedly, ISIL decided to bomb Isuanbul.
Intense pressure…..what intense pressure?  You would be hard-pushed to find any Islamist anywhere who believes Erdo has ever been or is ever likely to be a bona fide prosecutor of jihadist mass murder.
The PKK was a likely suspect for the attack, but this has now been ruled out. Either way, kneejerks in the commentariat currently condemning them as a terrorist organisation would do well to recall that Saddam Hussein’s treatment of those same Kurds played a large role in convincing Americans and Brits that we needed régime change in Iraq. My view is that the PKK is dumb enough to have committed the atrocity, but more likely is that Recep Erdogan needs an environment of generalised fear in which to crack down harder on his political opponents: this explosion will help to create a domestic opinion in favour of that.
As for this mythically “intense pressure”, US, EC and British élite opinion formers have been licking him all over from Day One. He knows perfectly well that none of those has the remotest intention of intervening in his steady establishment of a dictatorship. I am still in shock at the blasé and blatant manner in which euro-militarist Federica Mogherini lauded him as “a true democratic reformer with a sound record of protecting liberties” three weeks ago….although even more shocking was the deafening silence created by the absent critiques of her suitably altered reality. But here is some reality: while the US depicts ISIL as the world’s No 1 terrorist organisation, they’re far more interested in getting Assad out of the the way; and as this is a goal they share with both Recep and Daersh, well….
Logically, there are three main possibilities: a genuine attack by a peeved ISIL, a staged affair by Erdogan himself (that would make two in ten days) or a Syrian rebel backed, funded and given all the logistics by the US, with or without Erdogan’s approval. The last of these would make a lot of sense, but as always in the 21st century, nobody knows: we are living in the Age of Perpetual Uncertainty.
Recep Erdogan is able to promote his One True Cause at the minute because he has that all-important weapon, geopolitical leverage. He is, quite literally, in all the right places at the right time to be a catalyst for pipelines heading in the ‘right’ direction, migrants heading in the wrong direction, and domestic power heading in but one direction: towards him. Of course, currently, the Natotaur is working him from behind. But times change. At first the politicians then the military and the media were working Hitler from behind; then one day Germany woke up to find itself in The Third Reich…and disturbingly quickly, the German military, media and governmental machines were the marionettes, Hitler the puppeteer.
Don’t dismiss this analysis too easily. Overwheening American power in 2016 suffices to make Erdogan something of an insignificant regional political influence. But then, three years ago one would’ve conferred similar power on the EU. Observe how skillfully he has reversed those roles. Then think about the real and present threats to American global reach.
I freely admit to being in a minority niche when it comes to the imminence of US downfall; but being contrarian – while stressful – has never been a position in and of itself to make me doubt my assessment. Currently, the US élite is doing almost everything wrong in its foreign relations – and postponing the evil moment fiscally at home. Abroad, it is not just increasingly seen as an infantile bully: its intrinsic attraction to monopolism leads it to the insouciant creation of those who think a sport with two sides would be better for all concerned.
The Brics in Eastern Europe, Asia and South America have had a bellyfull of Dollar dominance, econo-fiscal blackmail, banking-led colonialism and persistent attempts to destabilise their chosen governments. To my mind, the Yellen rate-rise merely feeds the Bric appetite to have a counterbalancing power bloc. The British and EU/EC players may be happy to go along with the status quo: but they are the exceptions not the rule – and already, that’s changing. The flock towards China’s AIIB is just the beginning.
So what happens when debt, internal strife, banking chaos and economic reality combine to render the US more introspective? Or when Bric responses and what’s left of politico-market forces conspire to ensure the EU’s implosion?
Then we could well see the lure of Jihadism become irresistible for huge swathes of Islamic youth pauperised and half-starved by what they feel sure is Western materialist decadence. If that coincides with a geopolitical power vacuum and secessionary eurozone anarchy around the Mediterranean Lake, who then will be able to resist the drive of Erdo the Islamist Nazi?
Think before you laugh: when Rome’s civilisation collapsed, huge swathes of invaders formerly written off as barbarians took over very quickly…heralding in a new dark age. In his State of the Nation address yesterday, the Black Dude told the American people that anyone saying the US economy was in decline “is peddling fiction”. Well, there are few who do that spiel better than him.

Last night at The Slog: Time to launch the Flim-Flam Index