Serious constitutional, political and military consequences are inevitable whatever happens after June 23rd

While it’s been very reassuring to see overwhelming enthusiasm for Brexit on Twitter and in most of the UK media, Leavers still face an uphill task in the short term….and need to think about some of the consequences. For in every conflicted decision, there are always consequences.

I was amused by yet another consummate acting performance from Borisconi in front of the press yesterday – bumbling, likeable bloke riddled with pros and cons dilemma – but the reality is, almost everyone outside the fanatics at either end of the spectrum is going into the Recommendum Cameronicus in two minds. For myself, I can’t abide either George Galloway or Boris Johnson, and have always thought Nigel is a controlling Party leader of narrow appeal. But I think the EC-ECB-eurogrope axis of evil is infinitely worse, and David Cameron is an incorrigible liar who deserves to get his, so that’s that.

But “that’s that” applies only to the vote. After the vote, there will be consequences.

If the Stayers win (and personally I do not think that Twitter or the old media fully reflect public opinion) then some very dark days lie ahead. The Establishment will come back together – a clear majority of all MPs support staying in – and it’s obvious from the official Corbyn line that he too is a prisoner of it.

Think of it like this: if we stay in, then the winners will be those happy to be part of an anti-democratic, bullying superstate with preposterous imperial ambitions. We will be, effectively, appeasers of fiscal tactics far beyond anything Hitler’s banker Schacht ever tried on. And we shall be tied to serial word-breakers doomed, by their pompous arrogance and inflexible currency, to catastrophic failure.

This isn’t propaganda. As I’ve been trying to explain for three years now, France is an economic mess: only a crafty change by the EC in the definition of bankruptcy is disguising this fact. In the long term, it will come out ahead of most because it is more or less self-sufficient: but its banking system has problems I can’t write about, and with world trade now faltering badly it will be a bond-spiker sooner rather than later. ClubMed is a sick joke. On his own admission (at last) Draghi discerns that liquidity issues and capital flight are growing problems in the eurozone. With China all over the place, Germany’s top-end exports to the élite there have gone instantaneously into reverse. And last but not least, the UK has a trade deficit with most EU member States.

The British Establishment, in victory, would be given the nod and wink by so-called US and EU ‘reformers’, and that would be the end of any realistic labour movement or Opposition in England: there’d be more constitutional vandalism from Theresa Whiplash, more MI6 claims about terrorism – and fewer liberties – in very short order. And the recurring issue of Scottish independence.

Boris Johnson has kicked off by talking repeatedly about democracy and liberty, and I think we can take it as read that ‘restoring a more decent Britain in charge of its own affairs and borders’ could very quickly become the central plank of any energised Leave campaign. Coming from BoJo that is of course poppycock: my 2009 prediction that he and Harman were ‘the two greatest threats to freedom in the UK’ may have been half wrong, but it’s also on course to be disturbingly half right. The Mayor is a dissembling supporter of crony capitalism, ferociously dictatorial out of the public eye – and still guilty in many people’s eyes of perverting the course of justice over both the Newscorp scandal and Elm House.

The point I’m making is that by voting Leave we aren’t saving liberal democracy in Britain, we’re merely reprieving it. And not necessarily for long.

There is an ‘obvious’ (although by no means inevitable) course of events during which the Leave camp wins, Cameron falls, Johnson becomes Prime Minister with Gove as Chancellor, and in some way or other Farage’s Army is folded into a reformed Tory Party. This wouldn’t be at all to my taste, as not only would it involve a further lurch towards corporatism, it would also give Murdoch a free hand to take over from the BBC….and cement the position of sociopaths like Jeremy Hunt and Iain Duncan-Smith.

What’s not inevitable, however, is BoJo becoming Party leader. I do not doubt that Cameron would fall, but powerful beasts are ranged against Johnson throughout the Party. Across the spectrum of Conservative opinion, there are many who see him as a loose cannon, controlling in manner and unlikely to play well north of Birmingham. The prospects for Osborne are very much on the wane now, but Gove, Hunt, May and Hammond would be ‘better’ bets for many backbenchers and ’22 Committee barons.

Far more likely, I suspect, is that the Tories would descend into a pretty unedifying bunfight: reflecting what is, in reality, a Party split down the middle about EU membership.

But it’s the final consequence of a Leave triumph that I find by far the most far-reaching and important; and I don’t think that either side is likely to raise it. This is the effect of Brexit on the European Union.

For reasons already made clear by all sane observers not in the business of risible fear-mongering, there will be little or no economic effect in the medium term at all on the EU or the UK. What’s important, I think, is a contagion of rebellion in the south and east of Europe .

I make no apology for drawing a Second World War parallel at this point. Britain voting to leave the EU would have the same effect as Montgomery’s victory over Erwin Rommel in North Africa: to destroy the myth of invincibility.

Although the overwhelming reaction of those States thus far has been deep (and entirely understandable) resentment of Brussels ‘pandering’ to the British, a British departure would have the opposite effect….one of ‘strike while the iron is hot’. Poland, Hungary, Spain, Italy and Portugal would be galvanised, and the French Right under Le Pen would see the outcome as a massive boost for its credibility.

“Nobody loves or really cares about the EU,” a senior Cabinet Minister told me eight years ago. He was right: apathy in the UK remains the Out campaign’s biggest problem, but across the Channel it’s the EU’s weakest link. Take a look at this map of abstention during the 2014 euro-elections: 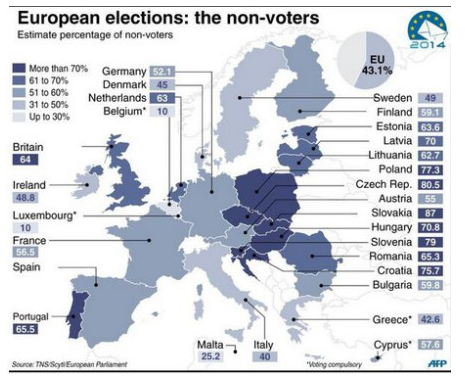 The darker the colour, the higher the abstention rate. The ClubMed countries were, at the time, anxious to give Brussels-am-Berlin a bloody nose: but even there, we’re looking at non-voting percentage rates  of 55-60%. In the old eastern Soviet bloc, there are rates from 65-80%.

There are many ways to interpret this, but the main thing I take out of it (as a former psephologist) is massive lack of attachment to or involvement with Brussels among most European citizens.

Whereas Churchill described the Desert victory as “the end of the beginning” for the Nazis, Brexit would almost certainly be the beginning of the end for the Eunatics.

I still doubt – albeit not based on information I can guarantee, because nobody can – that the real puppeteers will not stand by and watch Britain’s departure from the EU simply happen. The illegal allocation of EU funds to support Camerlot is already a fact, and I do not doubt that funds will discreetly be made available from Washington – for whom, in NATO terms, a crumbling European Union would represent its worst nightmare.

The 2015 Election was the first time I had heard credible feedback from UKippers about electoral irregularities – not all of which by any means were restricted to seats with a large Islamic population. And if you’ve ever studied modern plebiscites, then you will already know that (compared to constituency returns by candidate) they are a cinch to doctor…especially where there is a relatively low turnout. It’s odd as a Brit to have to write this, but were it down to me I’d have everything conducted under the strictest UN supervision available, and all the counting done by executives beyond the US and Europe. But that clearly isn’t going to happen.

The thing that will make June 23rd unique in British history is the broad spectrum of electoral motives involved. This in/out vote is nothing like 1975: the geopolitics were minimal by today’s standards, and the power opportunities almost entirely absent. Harold Wilson was doing nothing more than fulfilling a cynical election pledge: he had no desire to leave, and the majority in favour of staying was never in doubt. Finally, nobody foresaw any aftermath in terms of corporatocracy, Scotland, and massive Party splits: socio-political consensus in the days before Margaret Thatcher was far greater than young people can even imagine today.

In 2016, people will vote in terms of immigration, constitution, economics, jobs, liberty, sovereignty, Party tribalism, nationalism, rebellion and sheer spite. The stakes this time are far higher. And there will be unpalateable consequences of either result.

Last night at The Slog: Boris gets on ‘is bike at last