When I saw Piers Morgan trending at No 1 on Twitter this morning, my immediate hope was that he’d suffered some kind of mortal wound – after being eaten alive by Alan Greenspan, say, or perhaps shot in the back after running away from the scene of a crime. Looking on the trend page itself, it was amazing to see how many people had hoped for the same outcome.

But it was just Ron Smearpig applying his GCSE woodwork skills to an analysis of The Trump’s unstoppable bandwagon. So instead of going into that nonsense, here’s a chart I did earlier:

In case you hadn’t already guessed, this is the price collapse of crude oil over the last two years. It’s another classic of shorter and weaker rallies, and the pace of the plunge has two recent parallels. This is the price graph since 1970: 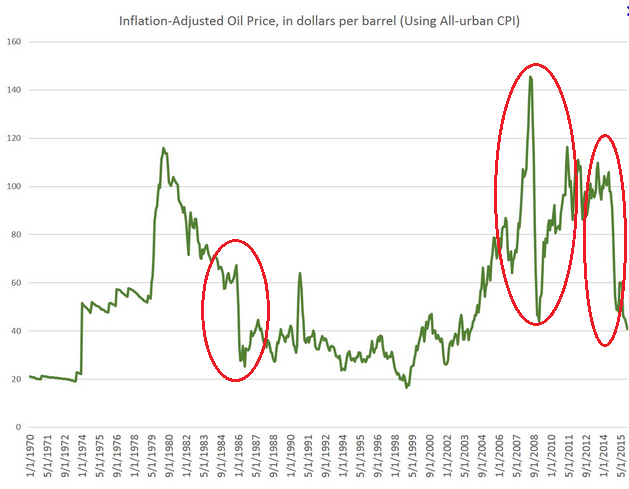 The 1986 crash was caused by a global economic slowdown exacerbated by Saudi intransigence in refusing to cut production. So too was the one we’re currently looking at: in 1986, the Saudis wanted to crush north sea oil, today they want to crush shale. The fact they made the same mistake twice would suggest that the Oil sheiks are not the sharpest cards in the pack.

The 2008-10 slump is the unique drop here, not the other two. It was caused by financialised capitalism going on the greatest dysfunctional greed-fest of all time, causing a wild panic in the face of what looked for all the world like a global economic closedown of investment and output.

Only now – with too much too late, as it were – is Yellen trying to wean markets, senior corporates and multinationals off misleading ‘free money’ profits. But the damage will be doubled by making it expensive to invest – especially given how potentially damaging dollar-denominated debt is to the emerging markets.

With the Davos Dandies convincing the market (for the time being) that things will be back to ‘normal’ in a trice, I think it’s always a good idea to look at the holes in their self-serving analyses. The realities of history enable us to do this. To sum up,

We are where we are for reasons that lie at the door of all the usual suspects: investment banking, Friedmanism, obscene greed, monetarism, US foreign policy and Saudi idiocy. To talk airily about ‘services’ and ‘rebalancing’ in the face of poor manufacturing output and flatlining trade is like saying Britain’s infrastructure is crumbling because trickle-down wealth has ensured that ordinary citizens don’t need an infrastructure any more. It’s a nice soundbite, but it is also complete poppycock.

Previously at The Slog: Chinese wealthy rush to get their money out of China because things are going so well