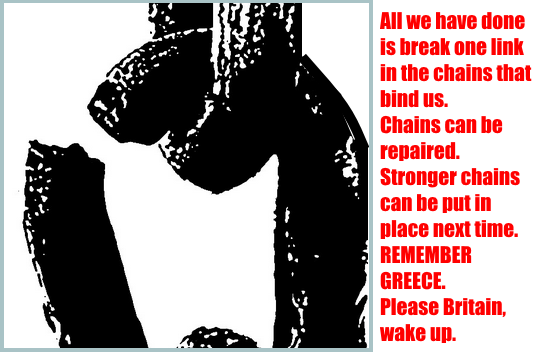 As soon as the first Slogpost today started going sub-viral, threaders and tweeters poured onto the social networks (and my site plus email) to insist that the deadline identified by myself and others was ‘nonsense’, ‘unsubstantiated’ and ‘alarmist’. I plead guilty to the last charge alone: I am trying to alarm Brexiteers bouncing about on Cloud Nine who think it’s all over. Please read the following carefully in order to have ammunition when the usual suspects pretend there is No Cause for Alarm.

The first line taken online today was “the deadline is a myth”. It is not: November 2014 to March 2017 has been a planned, open move by the EU members towards what is called ‘full integration’. After that date, all attempts to influence the EC will have more trees, walls and booby traps in the path of those trying to offer a contrary view. 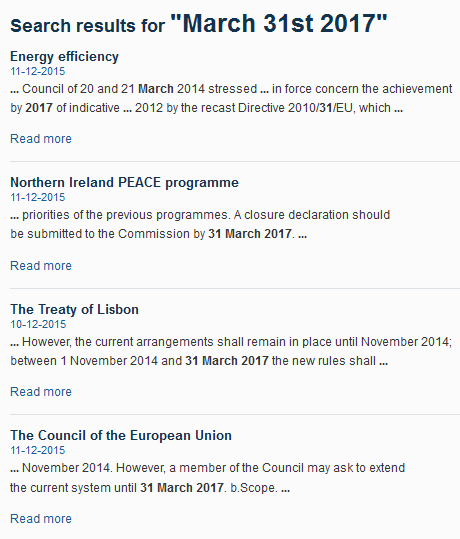 These are just the top entries. What you can see is that everything the EU/EC axis now wants to do has the same closing date. This isn’t a nasty secret plot, it’s merely part of the road to   ‘full integration’ announced in the Treaty of Lisbon (and subsequent directives).

On April 1st – how deliciously apt – all 28 members including us become ‘fully integrated’ in the wannabe Federalist Union….possibly just before it disintegrates, who knows?

If the UK doesn’t have a deal by this point – and let’s face it, if the current Cameron/Johnson catchy-monkey rate of play continues, it won’t – then things become more tricky.

My red elipses there point up that there is a new item at 49aTEU, and after March 31st 2017 it’s clear that secession will become a QMV (qualified majority voting) issue.

To repeat: there’s no secret conspiracy involved: this is the official version:

That link is to a post-Brexit entry at the EC site. It was written three days ago.

However, there is more. An addendum to the update makes one wonder what the point of Article 50 is any more, when the EC plants landmines like this one:

POWER LIES WITH THE EU WHEN PUSH COMES TO SHOVE

Is it me? Am I going mad? Before you all rush to confirm the query, let me ask further (somewhat rhetorical) questions: why go through 3-4 years of negotiating pain only to have the Council dump you in the cold with nothing because it could’t unanimously agree? Can you remember them agreeing unanimously about anything?

We could simply quit now, go for an interim deal before next April 1st, and then do deals on an ad hoc basis. The markets would be clearer and thus less neurotic, UK government could be totally focused on new economic and export strategies, and we’d be at least two years ahead of the game.

Last but not least, I would ask readers of this post to look back over the last five years of an EC based on subordinating bondholders, subjugating Greece, and using EU-illegal methods of fiscal and currency pressure to ride a coach and six over the Rule of Law:

In the light of Greece’s destruction as a functioning State, perhaps those with no sense of history should go to a site about what happened to Hungary in 1956 under the USSR. Or perhaps – thinking as many do nowadays that History is a thing of the past – they should read and then be astonished by this nasty, childish, vindictive but chiefly illegal spurt of venom from the mouth of France’s most hated President in living memory today:

Or they should delve into the memoirs of US Fed Treasurer Tim Geithner, who wrote in his diary after attending the EU finmins meeting in Poland four years ago:

‘The one thing I left feeling absolutely certain about was that these guys were going to beat Greece to death with a baseball bat. It was visceral vengeance, nothing less’.

There is a bottom line, and it isn’t very pretty. But unlike the British Left and their allies in the neoliberal globalist Tory Right, because it’s ugly I have no intention of ignoring or denying it.

The EU’s Commission (and its self-created ECB/Eurogrope monsters) will do anything to survive.

The British Establishment will do anything in its power to ensure that Britain remains a vassal State of the EUUS global bloc of bullying.

All the ignored poor, neglected entrepreneurs and well-meaning UKip voters are in danger of being sold down the river by The Borisgove….if we give them half a chance.

So then doubters, over to you. Do – please -show me why I’m wrong.

Today’s earlier post at The Slog: Yes, March 31st IS a deadline