Given the liberal obsession with “fake news”, I thought it might be timely to take one of The Donald’s most controversial and ridiculed policies, and examine the objective ramifications of building or not building The Wall. My conclusion is that the civil rights of America’s poorest indigenous groups are being damaged by illegal immigration, but that the Wall itself is something of a red herring. A better solution will, however, need Trump to tackle entrenched interests head on.

Here are some very simple facts about immigration into the US; they are all and only from Government institutions, University social studies and professional research organisations. These people – the “experts” so beloved of Leftlibs on the losing side – have been wrong countless times before…so I can’t guarantee any of their conclusions. But I can cast an expert eye over the data, and reach some of my own. 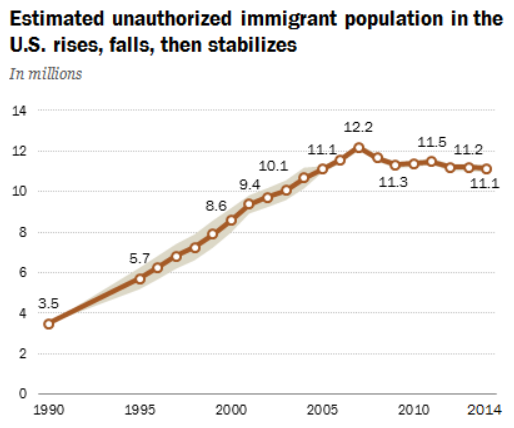 From a pro-Trump standpoint, these data represent some (but  not total) support for his Wall. Bush’s 2007 Fence Act removed the growth in illegal hispanic immigration…but not the cost going forward of simply ‘looking the other way’ in relation to unauthorised entry.

Further, giving a free subsidy to the Mexican government is unfair to US taxpayers, and simply letting them stay exacerbates the problem of falling wage rates and an increasingly disgruntled black population.

What strikes one as hypocritical is Clinton’s mocking of The Wall given she and most of her Congressional colleagues voted for its predecessor.

However, tightening security on the border (while important) is a relatively indirect solution: by far the biggest difference would be achieved by deporting illegals more effectively.

Part of that finding revolves around exploding the myth of “much-needed young workers” via illegal hispanic immigration. The demography of illegals conclusively refutes that liberal argument.

But to protect existing poor legal citizens means taking on both the neocon Establishment – which just loves all that competition for jobs and depressed wage levels – and the liberal Establishment – which, bafflingly, thinks the detection of criminal behaviour and doing something about it to be an infringement of “human rights”.

I am on record as saying that there is no such thing as human rights. But in any given collection of citizenry under a largely approved statehood at whatever level, there most certainly ought to be civil rights. The evasion of formalities and cheating of the State cannot be tolerated when that seriously affects the civil rights of the indigenous population….particularly if that section of society is already gravely alienated and at war with many forms of authority. I don’t condone that: it is simply a fact – and one which any responsible Executive would be honour bound to take into account.

If, once inaugurated, Donald Trump announces an effective programme of deporting illegals – alongside a programme of improved wage levels for a readily available, poor workforce to fill their jobs – it would evoke widespread criticism from two extremes supposed to be on opposite sides. For that reason alone, I suspect, it would prove to be very good governance.

At the weekend Slog: the infinitely naive hypocrisy of the British Left